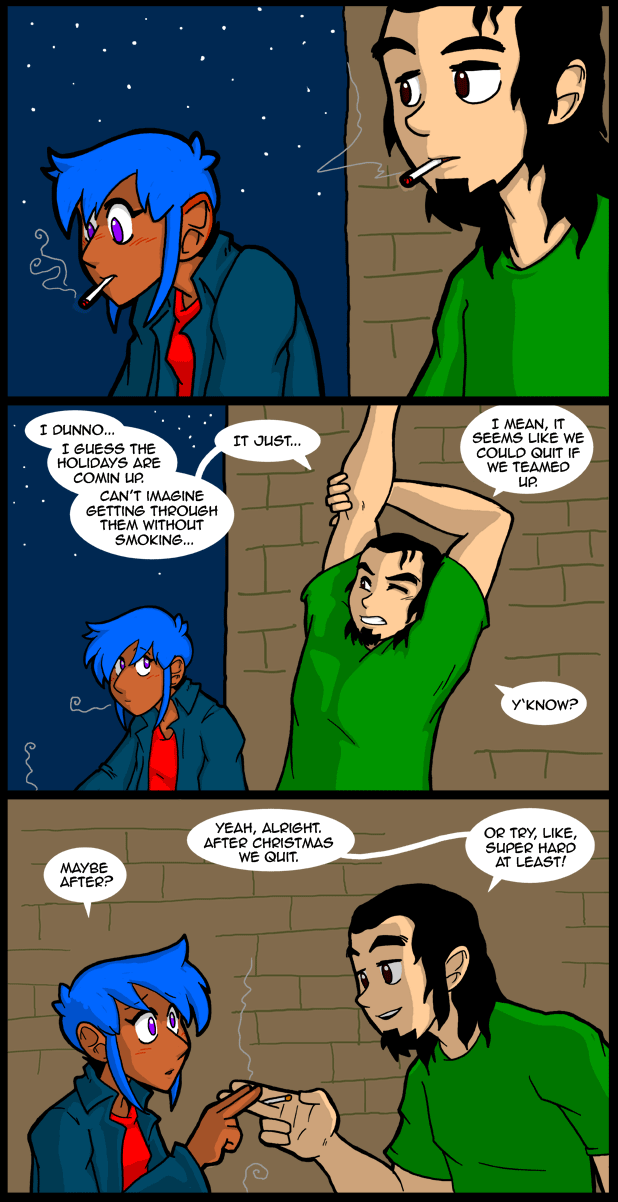 For the record, what they’re doing at the end is what ammounts to a “pinkie swear”. That version may be unique to the area I come from, I couldn’t tell you. Basically, you make the “scout’s honor” gesture, minus one finger, and then touch the extended fingers. Some people clench them at the end too. It may have evolved from scouting for all I know.

Something happened to the archive yesterday, but we’re not sure what. For a while the .com and .net versions of the site somehow managed to combine themselves. Something they shouldn’t be able to do. It happened durring a security update, and afterwords the site began acting odd. There’s no evidence on the server of things being throttled, but the site is acting like that for at least some portion of readers. At the moment is seems normal to me, but since my internet service is so terrible I can’t tell if it’s the site, or my service, most of the time.

If you’re getting errors, or the site is abnormally slow, please make note of them. We’re fiddling with stuff, so hopefully everything will be back to normal… or hopefully better… soon.

Hey! I am unable to view the comic for wednesday. I think that may just be my computer, but I figured I should let you know anyways.

I’m having the same problem. The image is showing as broken.

I can’t view it either. For browser issue diagnostics: my compy is running xubuntu and I am viewing this with firefox 15.0.1 I can see mondays and todays comics though.

OMG SO FREAKING PRECIOUS! ‘Bout time this subplot made headway

You know, I thought it was an odd occasion for a vulcan pon farr hand action.

One of the things I really love about the comic is the subtle details that differ between characters. Specifically, in this instance I really like how John’s cigarette smoke is different from Brooksie’s; his is all jagged and sharp while hers poofs and spins everywhere. It fits their characters well.