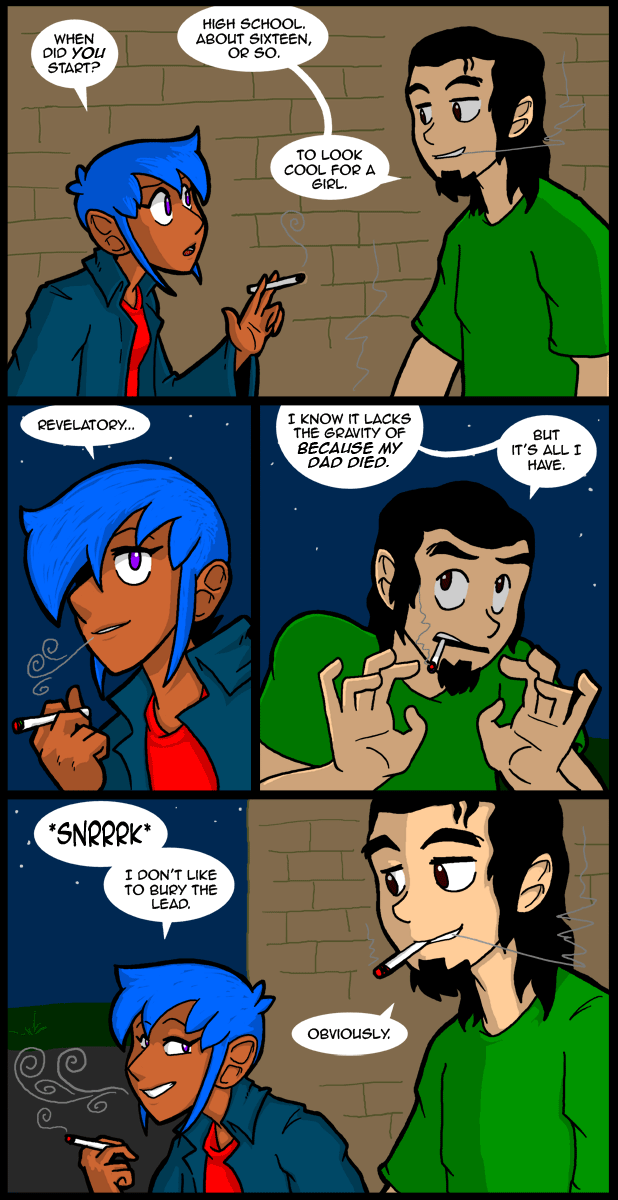 For the record, Jo still has her mom. The title is a reference. Search the net for it!

Okay, Best Buy had a really good sale on Kid Icarus Uprising, and I just went for it. I’ve learned over the years to trust my instincts rather than always wait and see what happens. In spite of all the stuff I’ve read about the game I just bought it. Kid Icarus was one of my favorite games as a kid. It was actually super hard to find by the time I was aware of it, so it’s one of the only used games I had at that time. I ordered it from a place called Funcoland. It had a few names over the years, but the company was infamous to gamers at one time. Back then ordering something was a huge fucking ordeal, so you had to be totally serious about it. I had played a friend’s copy, I think, and really wanted to finish it. Once I got it I played it a million billion times. Eventually getting the best ending of all. I still think it’s one of the best games ever for a variety of reasons, and it’s still fun to play after all these years. Which is not true for a lot of NES era games. It’s really a shame that it never got an actual upgraded version like Mario All Stars, Kirby, or what have you. It would look really great with a 16 bit overhaul, and I’d buy it again if it ever happened. X3

Anyway, Uprising finally showed up and when I had a free moment I tried it out. I was really taken aback by how wrong most of its critics were. I didn’t need the special stand to play it. The controls were nowhere near as bad as they were made out to be. It’s actually really fun. I’m not saying the controls are perfect, but they weren’t the travesty most of the net made them out to be. They are weakest in the ground levels. No one ever adequately explained how it works, even though Pit says it exactly IN THE GAME. It works like spinning a globe, and just like spinning a globe if you are turning fast accuracy suffers. In this way the controls suffer most. Once you get used to it it’s not a big deal, but in the heat of battle it’s easy to get lost. There’s also no way to auto target in the default control scheme, which leads to a lot of target searching in heated battles. Still, it’s not that bad. It’s better than Star Wars Battlefront on the PSP. At least I don’t spend half my time shooting the ground directly in front of my feet. Basically the various game reviewers I’ve heard from are crybaby pussies. You guys were way more accurate about the game.

The soundtrack to this game is phenominal. It’s on a level so far above recent games I can’t even think of something to compare it to. The last game I can thinK of that was close, at least for one song, is Smash Brothers Brawl. When I’m on the menu screen every so often I just take a moment to appreciate how good the soundtrack is, and you spend a lot of time there, so that’s good.

I like the weapon collecting and the way each one subtly changes how a level feels to play. The voice acting is top notch, and the writing is quirky. Kind of like the Mario RPGs. The game does not take itself seriously, and is very self referential. In fact, the very first words Pit says are “Sorry to keep you waiting.” Many times, when an enemy is introduced, the games shows you the NES sprites on the lower screen. Unfortunately it does this durring battle, so you can’t really get a decent look at it, unless you’re playing at a very low difficulty. Not that the sprites are anything much to look at… In a lot of ways Uprising is like the Metroid series. Old enemies come back, but are WAY more impressive than they were before. So Far I’ve beaten all the original bosses, not even realizing that the first one WAS the first boss from the original game because the upgrade was so extreme.

Anyway, I don’t remember if Nintendo offered a demo for Uprising, but it should have. I think that would have solved a lot of problems as far as crittics fucking things up for them. It’s a game you need to play to understand, and the first level shows you everything you need to know. I feel like if I had played a decent demo the re wouldn’t have been this long “I don’t know if I want this” period.

I, uh, don’t get the joke. “I don’t like to bury the lead”? Is it a pun with the wory “bury”? Is it a joke like “my life is worse than yours, I win!”? Is it a reference, or some phrase I don’t know about? Appreciate the help, as I’m really confused. Also, Funcoland was sweet; I bought all my games there, exclusively, until Gamestop swallowed it up.

Technically, it should be “bury the lede”, but I suspect that’s pretty much a lost cause.

Does anyone notice that Jo’s smoke lines are swirly while John’s are zigzagged?

You should just have them fuck already. =)

But seriously, as others have mentioned, I also enjoy the subtlety of the characters having different styles of smoke. Keep up the good work.

Do you not SEE what is happening?

I know this one man! I’ve TOTALLY BEEN THERE.

Funcoland that takes me back, weren’t they bought out by either Electronic Boutique, AKA EB games, or gamestop?

Those two are the same thing, love~ ;)

I miss my old local Funcoland, which had an arcade until it was bought out by Gamestop.

It was back before the days of shitty FPSs dominating the market, when there was a fair bit of camaraderie and a love of the whole history of gaming… ah, nostalgia~

Nice to see Jo smile — and even a snort is almost a laugh! She’s been ‘about to’ jump Kepler’s bones for (subjective) years.

Oh, and kudos to @Muffin, who is right about the “Bury the Lead” comment — first year Journalism.

I jist of uprising is that holding the DS in one hand and the stylus in the other is kinda shit, something that I fully agree with: If you want M+KB, make it a PC game. N has a ton of good ideas that feel like they’re cramming them into shitty hardware and physical setups because “that’s what we have out right now”, instead of making the best games they can…

Which is why I don’t own any games that require a Stylus or the horrid motion-sensor controls for the Wii except for Kirby:KiDL (which is limited). I borrowed most of the games and found it’s really obnoxious any time I get around to it… which makes me sad. The Wii cursor is fine, it’s the motion sensors that’s crap. The Stylus has it’s place (Box operations in B/W come to mind as “why didn’t we do this earlier?), but an entire game? an FPS? It bothers me when people make games that would be great but don’t set it up with the right hardware…

I dunno. It seems fine to me, and I don’t have any trouble holding the 3DS in one hand. Maybe it’s because my hands are big. I can see how it would bevy are for a little kid, but I haven’t even used the stand. I also haven’t had problems with the wii motion controls. In Mario kart they work flawlessly for me. It seems like I’m having an unusually good time with their gimmicky stuff.

Heh… how do your times stack up against the WRs?

I’m a competitive player, and every game I play I either beat and put away forever (which usually means a short game, or one without replay value/route challenge, or no fun bugs to exploit) or I strive for world records in things viable. The Wii motion control (which doesn’t include the cursor properties, which work well enough) isn’t accurate enough for my liking… what frame a shake triggers on seems fairly random even in the best of conditions, and it occasionally refuses to trigger at all. Add to that the fact that, unlike buttons where you can press all of them at once, it’s rather difficult to say, shake the controller while rolling it forward quickly and tilting it no more than 15 degrees to the right (Which was one of the inputs I remember hating from a particular SatSR speedrun that I did clear).

It’s a hoop, and that hoop is frustrating… there are 11 button inputs, 2 slider inputs (which is another rant, heh), and two sticks that I *know* can send data, and usually Wii games make far less use than that… there’s no reason those things couldn’t be on a button, and the actionable time/effort of the button is smaller, and very precise… it’s all worse than ideal, which is what everything should shoot for.

How long do you play your 3DS at a time though? Most people play for maybe an hour, give or take, if the pokémon survey is accurate at all, and I (and those I know closely) tend to game for stretches of 6 hours or so, barring bathroom and food breaks… and I’m sure that’ll go up if SSB3DS doesn’t suck nuts…

Is joe some kind of cigarette ninja? It reverses position in her hand between the first and second panels.

Is switching to her dominant hand abnormal somehow?

Only in the States…apparently it’s all the rage over here in the middle east.

Oh, look at that. We’re getting rockets shot at us again. Time to go take cover.

Im kind of too tired to think about this so im just going to ask: After John says “To look cool for a girl” and Brooks says “revelatory”, what does she mean by that?

She’s being sarcastic. It’s not revelatory at all.