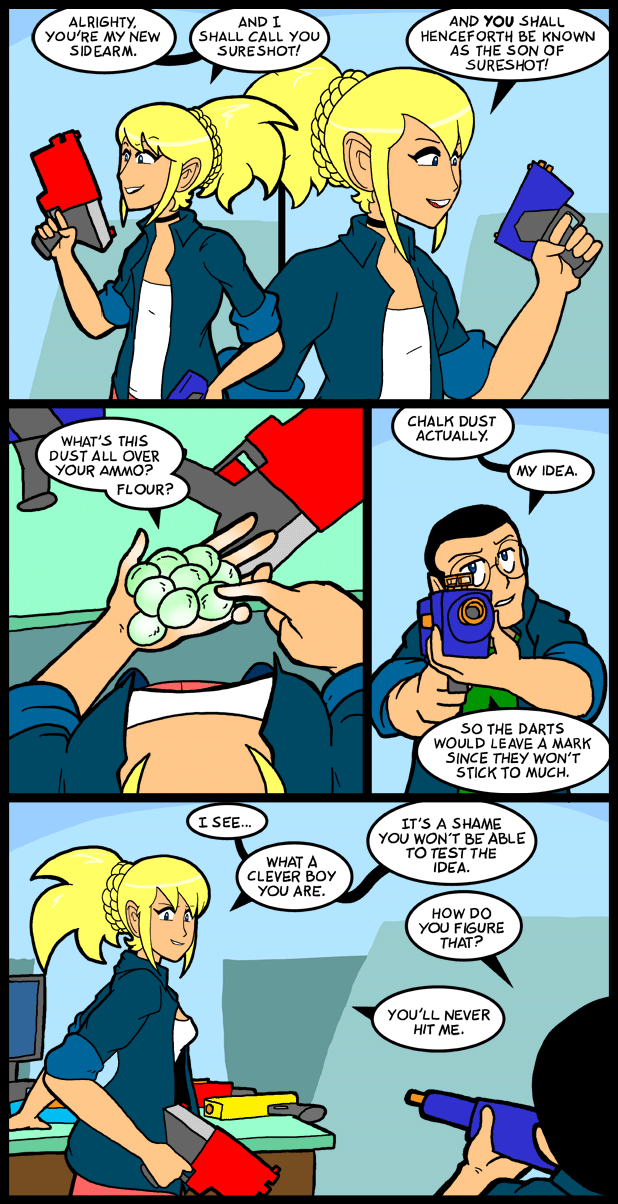 One of the biggest problems with Nerf guns has always been that you’re on the honor system when it comes to rules. The dart tag vests are at least some kind of scoring system, but not a lot of things come with the right darts. I always thought a light robe, or some such thing would be better. That way more of your person would be in the strike zone. I’m not sure Nerf wants to get in to making clothes… Whatever. Maybe Ed’s plan will work. I’ve tried it with various substances. You get about 2 shots per dart. After that it doesn’t leave much of a mark. Also only colored sidewalk chalk leaves noticable marks on light colored clothes. It’s the easiest chalk to pulverize though, and you get a lot of dust in your bucket for not much money. The force of the shooting knocks a fair bit off by itself. It’s not a perfect system to be sure. Whistle darts are actually fun because if you get enough dust in the head they leave a dust trail, and they poof when they hit. I bet breathing in the dust is good for your lungs too. X3

Drawing this story has been troubling because it makes me really want new Nerfs. The one Nina has in this page is one I like very much. I’m not sure what the name is of the design it’s based on. Later on Thomas gets another one I really want. It’s not like I have any use for the damn things. There’s nothing, and no one, around here to play with. They’re just neat. Which is why I have 3 Mavericks… 2 is too many of those.

Youtube, as you all know, is not a safe place for people who have things to do. The other day I was looking at some random thing and happened upon a tutorial for applying makup. As a boy I’ve never given much thought to the application of makup, and I prefer girls who wear it only sparingly if at all. As this is a part of female life I’ve never given any thought to before I was, of course, mezmerized. It’s clearly a skill, but how is it passed on? Mother to daughter? Friend to friend? Likely a combination of those ways, and others I haven’t thought of. Unfortunately my list of female friends is limited, and those I do have aren’t very girly. So I wasn’t able to obtain any firsthand information, or ask any question I had. When I was little my grandmother was completely obsessed with her appearance. I never thought to ask her anything about it at that age though. Anyway, I watched at least an hour of random tutorials and demonstrations of makup application. There are clearly rules about why one chooses colors and whatnot, but not many of them were forthcoming.
I mostly saw product reviews, which led me to another discovery. Product names for makup are still really sexist. Like, really abnormally so for these days. There’s one line called Shop , Shop, Shop, Clean, Clean, Clean or something like that. I guess the kind of girl likely to cake on a lot of makup isn’t going to be super concerned with that sort of thing. They know their target audience, I guess. There were several names mentioned that were that way. It was odd.

Add experimenting and you pretty much have the gist of how girls learn to apply makeup. Color choice depends on complexion, eye color, sometimes outfit, day or night/event. Or, you can take my approach which is pretty much “Oooo pretty colors. Let me put you on my face. Oh crap I look borderline ridiculous. Oh well, I have to be somewhere soon.”

No one really ever taught me to put on makeup. I think I watched my mom do it a bit but she never used much (eyeliner, mascara, lip stick). I got the general idea of it but anything more complicated than a light dusting of whatever is beyond me. I think some friends may have tried to get me to at one point, but I always rankled at the thought of doing something daily that took so long. I don’t really wear makeup except on special occasions like Halloween or job interviews or something.
I’m not really sure where regular girls learn it, either. ^^; I always imagine it’s a combo of both family and friends but, I don’t know.

The chalk dust is a cool idea. It sort of reminds me of that Swan Princess Archery contest(Oh my god I can’t beleive I remember that movie…)

Anyway, Son of Sure shot is a much better name than Sure Shot itself. Tells you that gun has something to prove. He’s his own gun and won’t live in his fathers shadow. Sadly, circumstance will drive the two to opposite ends of some fight.

Looking forward to some action scenes, maybe a flip or two.

When it comes to females applying makeup, I always figured they learned the same way I learned to properly trim my facial hair.

And as for the comic, I figured the Movie Nut would be the one pulling Matrix moves, not the Book Worm.

I think I have you beat there, my friend. I am of 20 years of age and personally own 2 Mavericks (for incredibly inefficient, but badass looking dual-wielding), the Long Strike nerf rifle and several clips for it, the Sharp Shot dart tag pistol, and the bandolier to hold them all on. But my crown jewel is my Buzz Bee Belt Blaster which actually outclasses all the Nerf guns in accuracy and distance. Bonus note, if you clip the Maverick’s back onto the bandolier, you can actually cock it one-handed :P. Maybe one day, if we should ever run into each other at some sort of convention, we could have a friendly Nerf battle.

Are you serious about the buzz bee belt blaster? hmm.. i may have to go out and buy it.. I had a maverick, and the “assault rifle” i forget what its called but its the one with the most interchangeable parts…I also had about 100 darts, a short sword, 5 clips for the rifle, including the quick flip one, and the bandoleer belt. Unfortunately i had modded them both something fierce and ended up breaking the spring for the rifle. Its last shot caused the collapse of the reload mechanism…and i haven”t gotten around to fixing it…but man does the maverick shoot far.

I don’t joke about foam dart blasters, my friend. *In best George Takei voice* I take foam dart blasters very seriously. */takei* But yes, out of all of my blaster experience, the Buzz Bee blaster is way more accurate, even moreso than the Long Strike Nerf rifle. However, it does jam sometimes, which is a bummer. But the jams are easily fixable, about as fixable as the clip system jams.

Remeber that the Longstrike is actualy pretty weak by nerf standerds, the LongSHOT is where it’s at.
I’m not suprised that the Buzz Bee is stronger though, hasbro seems to dislike making their blasters powerful. The thing that makes Nerf better than BussBee for me is the stronger plastic… which allows for the gun to become far more powerful in the right hands.
I get a 80ft range on my recon (the interchangeable on) but I’m sure you realise it’s far from stock.

Is Nina just using the little single shots for the dart board game? ::Squint::

And is the ammo for disc guns?

(I won’t go into my own Nerf arsenal, but… it’s shamefully large.)

Nina, you ought to know. Overconfidence is a strong weakness, and you just dared him to follow through.

Man, Nina’s guns look an awful lot like the Vigilon (Which I recently purchased, despite having no one to shoot at) But scaled down. I’ll have to have a look at the toy store and see what the other disc guns are like.

Edward, Edward, you just made a big mistake. You should have shot her first as a way to demonstrate the new marking system and the lack of adhesiveness of the nerf.

Cue Ed proposing they team up

The minute I read Nerf guns and honor system, I immediately thought of my childhood the rules we had to make up for ourselves. For my friends and I, it was always one shot=out.

Sorry — I’m just too old to have experience with much NERF stuff beyond the original NERF Ball (1969 — when I was 12), so I just want to say:

I really like the Point of View in Panel 3.

Everyone likes the point of veiw in panel 3.

Now, I know that any camera angle looking down a woman’s chest gives you a nice glance at cleavage, especially with a girl like that. So…Fail.

Now that you mention it, where are her boobs in panels one and two? She’s looking pretty flat up there.

What page are you looking at? They’re right there. How big did you think she was?

my friends always modify any nerf guns they get, altered springs, a little creative knifework, and the like will get you much more accuracy and range than you would normally have with them

If I could actually find a job that would hire me, I would recommend this as a means of “work-related stress relief” at board meetings… or laser tag. But then, these guys make even the notion of working retail itself look fun. |:\

Hahaha we actually did this sort of thing when I worked at Toys R Us. Never tried the Chaulk dust though. Always used the velcro vests with the velcro tipped darts.

I remember my mom doing my makeup one year when I dressed up as Cinderella for Halloween and I remember friends at parties doing my makeup, but since I never wore makeup unless I was forced to I learned how to put on makeup when I took a stage makeup class for my theatre degree in college.

Is Nina using the Vigilon? I’m using the same gun for my game of Humans Vs. Zombies.

That’s what it’s modeled after.

I knew it looked familiar, but I didn’t piece it together till I grabbed my gun this morning. My favorite part is how you load it, is there a chance we’ll get to see Nina load her’s?

The problem with makeup, as far as I’m concerned, is that it really becomes this whole THING. I had this startling revelation when my mother tried to help me with some makeup on Halloween, and I was horrified by the clear evidence of powder on my face.

….. Something to do with pore size. So to wear makeup well, I guess your pores have to be small. For your pores to be small, you have to constantly be washing and moisturizing your face. Which means extra effort to take the makeup OFF so you continue to look decent in it.

…. Maybe I’ve just never seen someone put on good makeup recently. But since my whole family’s in the theatre business, its my understanding that makeup is meant for certain situations, and most importantly certain lighting.

All that being said I’m convinced there’s some inherent voodoo to cinematic makeup, because I never see pores in movies or when I’m watching Face-Off. D<
…. I really hate makeup, by the way. It is still somewhat of an enigma to me and frustrating for the very few times I might ever consider wearing it. -huff-
(It doesn't help that my sense of beauty is usually influenced by femme fatales from the 30s. I could only achieve that look in black and white film. ;—–; Damn you, Max Factor.)