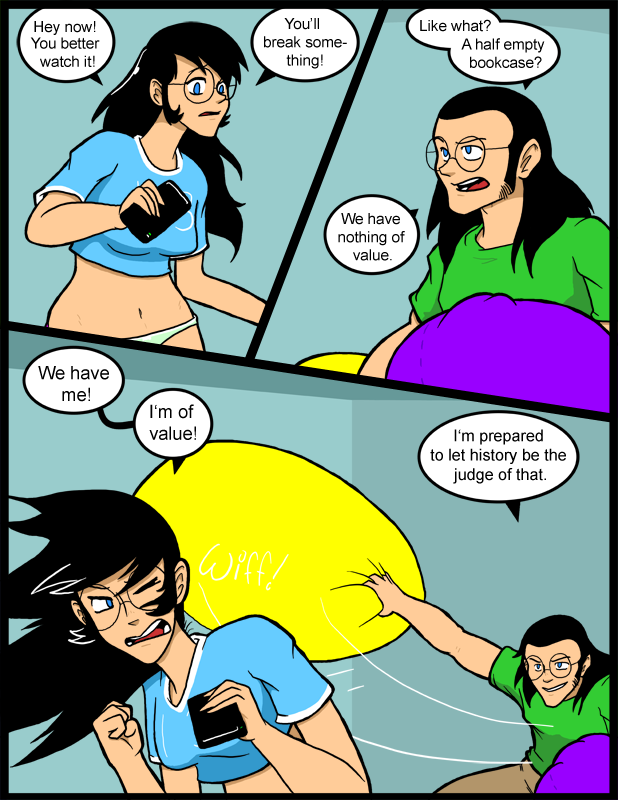 Okay, first of all, here is the best picture I could get of that spider.  It was a windy day, but I think it’s the very same one.

I think if you click on the image you see the full size version of it.  I made it small so that people who get queasy  about spiders  won’t have to see it very good. (well?)  It had a net strung up between two plants.

Anyway, I had a dream where a girl was accusing me of plagiarizing an episode of Futurama in my comic.  Except it was an episode that doesn’t exist, and the comic in question didn’t have anything to do with Futurama in any way.  I actually saw the episode in my dream, but I don’t remember enough of it to tell you what it was about.  I only know it was a Zoidberg episode.

Maybe the Harold zoid or zoidbergs home planet. Or the where his people enslave the earth.

I think it was the one where reggie, has to have sex cause he’s going nuts. However his rich washed up uncle shows up and kill free waterfall SR.*deep breath*

I do remember one of yours doing something like that.

I think what you have there is a white-backed garden spider or banded argiope. Is it kind of stripy on the back?

Here’s another photo for comparison.

Yeah it was kind of dark and stripey.

In my opinion, it is instead an alien life-form who’s settling in your garden to ready a foothold on Terra and conquer it from there. No, really, it doesn’t look from this planet…

Dark, hmm. The banded argiope has a light back.

I think it’s definitely in the genus argiope. I can’t say about the species. It could be a variant of the banded argiope or some other closely related species. The markings on the ventral side are very similar.

It could just be the lighting I’ve seen it in makes it seem darker.

Been a while since I’ve seen a Zoidberg episode. You should write the episode and sell it to Matt Groening. Speaking of Futurama have you seen any of the new season?

I’ve seen the whole season so far. I liked it. Took a couple episodes for them to find their groove again though.

The picture of the spider is really beautiful. And i kinda wish you would get back to the night out with the other two…..pleeeeeeaaasssseee!!!!!!!!!!!

That section is over. I don’t intend to go back. I’m thinking of doing a Jolene story next.

Yay for Jolene. Cos after 650-odd strips we know next to nothing about her.

But, yes, yay for Jolene!

Shouldn’t this page be numbered 658, since the previous one had the number 657?

The word is well, but you caught it. Also, that’s a nice underhanded comment he made, either that or I’m too otaku.

First time this, long time the other. I’m surprised no one has commented on the fact that Ed appears to be swinging around two bean-bags one handed. Those things are bulky as hell and not exactly light; that boy must have the strength of a gorilla. Anywho, great update as usual, and love his little jab at the end there. “let history be the judge”…priceless.

Would the judgement of history come during her lifetime or after her death? I ask this because most people are judged in a different nicer way after they’ve died cough*Reagan*cough cough.

Typically history judges you after your death, but with some people it can come before.

Great comic today, like the spider pic too, i remember those from my hometown when i was little, i used to feed the ones near my auntie’s house when ever i could

They must be super common, but I never saw them get so large before.

Did I sense a stutter in the last few words of that?

hehe if so, I don’t blame you… sucker looks SCARY.

If TVTropes has taught me anything, it’s that Ed’s DS is going to end up broken as a result of this fight.

It’s also taught me that if I’m wrong, that’s fine, there’s a trope for what happens instead. :D

The sad thing about TVTropes is how little is actually referenced there. Plus not a lot of it has to do with TV. It needs a name change and more comprehensive coverage.

Also a lot of stuff is wrong.

They haven’t even learned how to fly with their chi yet. Dragonball Fail is the worst chapter ever!

Too many names for… you know…. nutritional excersize and healthy food? XD

I’ve seen it translated both ways depending on who did the work. Ki seems to be the way they translate it in DBZ now. It was chi for a long time.

Where are their parents?

I’m not sure if anyone has actually mentioned the name of the town they are in now. Mike might have said something about it in passing at the start of day 2.

I still don’t get how you can possibly remember such an astounding amount of your dreams. I mean, I -never- recall -anything- in the morning. You, instead, seem to have a cybernetic implant recording everything, implanted somewhere in your brain. That’s just not fair, I’ll tell you >_<

The stuff that comes along with being able to remember dreams really wouldn’t be worth it to most people.

I don’t know why, but some people just have really good dream recall right from the get-go. You can improve your dream recall by keeping a dream journal, and writing down your dreams each night with as much detail as possible. Of course, if you’re not careful, you will get really good at remembering your dreams, and, like my roommate, begin having difficulties separating your dreams from reality.

It’s actually extremely useful to have good dream recall as it makes it easier for you to preserve your stream of consciousness in your dream. This technique, called lucid dreaming, will allow you to take complete control over the fabric of your dreams.

Most people would scoff at this almost mystical information, but it’s actually very well documented and very much worth the effort of achieving.

Or you could be like me. I got dropped headfast onto a hammer as a baby and now I have nothing but lucid dreams. I’m pretty certain the two are related.
But seriously, I don’t know what a ‘normal’ dream is like. Or even a nightmare for that matter. Never had either.

I confirm, it’s all true, nothing mystical, just science. My problem is mainly I already start remembering nothing, so I wouldn’t know what to write even just to begin with.

Once I -did- remember some dreams (I had one with a giant-mecha-Buddha piloted by a blue-skinned Hindu avatara in a red uniform called Krishna Blue, it was AWESOME), but it’s years, I think, I can’t remember anything at all -__-

i for one, think the bookcase is half filled. :D