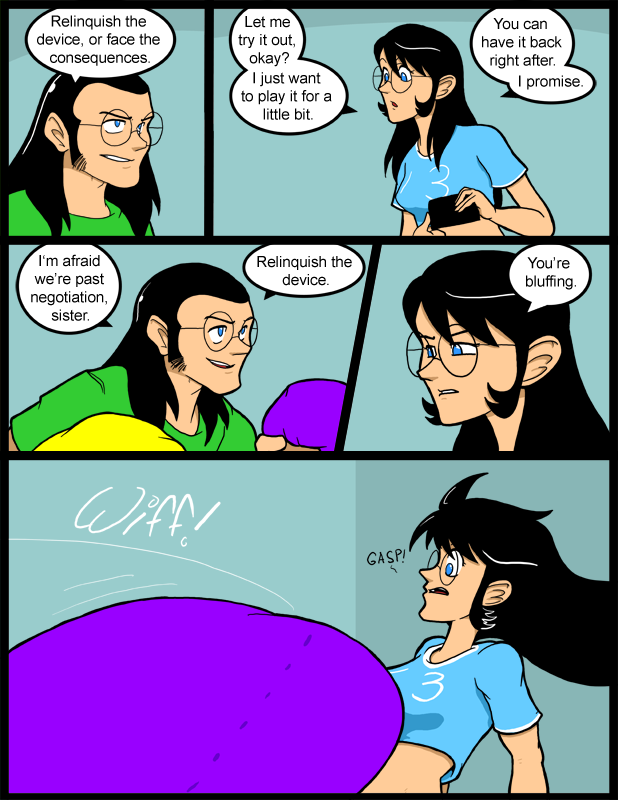 There’s no magical force that makes luck.  Or at least one that science can detect.  It’s just the intersection of decisions you make,the decisions others make, and the motion of the universe.  I mention it because I lucked in to a good advertising deal this weekend.  I can’t claim any special knowledge, or feelings that led to me making the choice.  I just happened to make it and it worked out particularly well.

I’ve been reading Shortpacked! since just before I started this comic.  So…  about 3 years?  4?  Anyway, since I actually know the work I know that a certain portion of its readers are going to like my work.  I made a targeted ad specifically to run on that site.  It will run nowhere else.  (At least no place I know of yet…)  If you haven’t seen it, it’s basically an edited portion of Thomas & Carol talking about Beast Wars.  David Willis blogs about Transformer stuff constantly, and nerds, in general, are drawn to cute redheads.  Nerds seem to fall in love with Jolene once they get here, but Carol has been the best honey for my traps by far.

I set the ad pricing so that when the cost dropped over the weekend I could draw in bored stragglers.  The bored are my safest bet because my comic requires you to read from the start AND remember things about the story.  By chance Willis posted bonus pages all weekend, and my cheaper add ran while other advertisers snoozed.  You can’t plan that kind of thing.  It’s just serendipity.  The kind of thing that Fes is trying to explain in the luck portion of his formula for success in comics on the web.

To say that there’s no such thing as luck is foolish.  Luck exists.  It’s just not a tangible thing like electricity, that can be measured.   You can only perceive luck after the fact, but you can be lucky, and good choices, and educated guesses, can bring more luck to you.

“Relinquish the device”. That sounds… sinister. I like it.

Also, did she gasp, or did she SAY “gasp”? Because she’s exactly th kind of person who would actually say “gasp” in that situation.

In this case she gasped.

Would have been more climactic to see her take a shot to the face.
. . . No pun intended.

Wait… How would that even be a pun?

If you don’t know, you really probably don’t want to know… It’s rather dirty. Or maybe just I am.

Yes, you are Galloway. But that point aside it does get my mind rolling along that particular bridge and I have to say, if I had a twin and we looked that much alike in the face, I wouldn’t being trying to emulate her hair style by growing my hair out. Hidden story concept maybe?

Maybe it’s her emulating him. Or maybe I’m just a one trick pony when it comes to character design. XD

hmmm… nope. Don’t think it’s you Crave. You’re comic is the first one I’ve run across that has a… how did she describe herself…. oh yes, a fairly ample female character that isn’t an animal of some form. John and Thomas are drawn differently, and Mike… well lets just say I could recognize Mike if I ran into him in real life. I’m holding out for the “Oh he’d look cute in this” Halloween story idea. hehe, I just got a really mean image of Brooksie and Nina ‘helping’ Ed with a costume for Brooksie’s movie.

I’m glad to know you don’t think my character design is stale at least. XD

‘Rather’ being an understatement here. It involves projectile fluids.

Maybe it’s not luck and you just deserved the ad. You got a good comic so it deserves more attention.

I don’t know about deserving attention. I’m certainly working for it though. XD

It was because of that Shortpacked! banner that I ended up here…

And I’m still trying to figure out who Ed reminds me of… Every time I see him, I get the niggling suspicion that I know him in some way. Probably going to kick myself heartily when I work it out.

I know the feeling Astragali. I’ve been bashing my brains in to figure out who Carol reminds me of. No luck yet.

Um, Ed usually gets compared to Popeye, Harry Potter, & Lupin III. I kind of have weird little bits of several of manga styles mixed into my work. Maybe it’s one of those.

My take on luck is similar to yours, JT. Essentially, you build your own luck, as you did by knowing what you were doing when puttin’ up the ad. And then yes, of course there’s coincidences which can’t be foreseen, like Willis updating on the weekend too, and that’s probably the truest luck -it just happens. No magic involved, just how complex systems work.

In other news, is there a place where you stash your fanart? ‘Cuz I forgot to comment on Remi’s beautiful rendition of Nina, amongst other things.

I’m actually buying a set of images from Remi, so your wish is my command.

Wheee! ^___^ Hey, one more question if you got the time & inclination -do you have a gallery somewhere? I love your art, I saw the great stuff up there between BOOKS and LINKS but if you’ve drawn more, well, I’m all for it! ^___^

The Deviantart account I use to store extra art is connected to all the other galleries I have. You should be able to use it as a hub if you want to see anything else I’ve drawn. http://crave-the-bullet.deviantart.com/

Oooh! Beg your pardon, I’ll now proceed to drool over the entirety of your gallery, feel free to continue updating in the meantime (also -thanks! ^___^ ).

She got him out of his crappy mood.

Get a wiff of that!

Don’t forget the additional luck that there was a massive argument on the comments section of Shortpacked a while ago about Beast Wars. It was the only reason I clicked.

He also had a meltdown over a snotty fan in the comments that drove some traffic there. I forgot to mention it.

Aaaaaaaaaaand this’ll be the point where it gets broken.

So the comments about the ad at Shortpacked is what made me notice the ad at all. I dug through the archives on Saturday while doing some research. I dig the site. Its a little odd that you’re 650+ comics in and only like 3 days have passed but hell, its your comic.

The time thing isn’t all that odd really. Mot people just don’t make a point of calling attention to it as blatantly as I do. In any case, I’m glad you enjoyed yourself. Thank you for reading.

Ooooh, Boob-shot! Right where it really hurts (at least for teh womenz). I’m excited for this story arc to complete A:) Because I wish to know how this battle will evolve and eventually complete, and B:) Because I want to see more of the dinner/date story line and completion (XD).

On the subject of fan-art, there needs to be moar. UNDERGROUND ARMY OF ZOMBIE ARTISTS, I SUMMON THEE TO MY AID!!!

Well, he didn’t actually hit her… I’m working on the last few pages of the Ed & Jess story even now. It should be over in a couple of weeks.

Also, the dinner “arc” is over. There won’t be any more. If things don’t move along I’ll never get to any of the actual plot points from the early stories. It’s just a short look into an evening with them. They make reference to it later on, but it would take too long to actually show it.

Just found this comic yesterday.
Did the Long March through the archive…
I’ll need another Six Hundred strips for tomorrow.

Sigh, I suppose that’s the way we all feel like when we get to the end of the archive T_T

Yeah, I wish I could draw that fast. Thanks for coming this far at least.

This is all going to end in tears. Ed was very careful with the device as she attacked, but is foolish to assume she would do the same.

He should’ve just told her, ¨You don’t want me to fight the world… but you make me fight you?¨