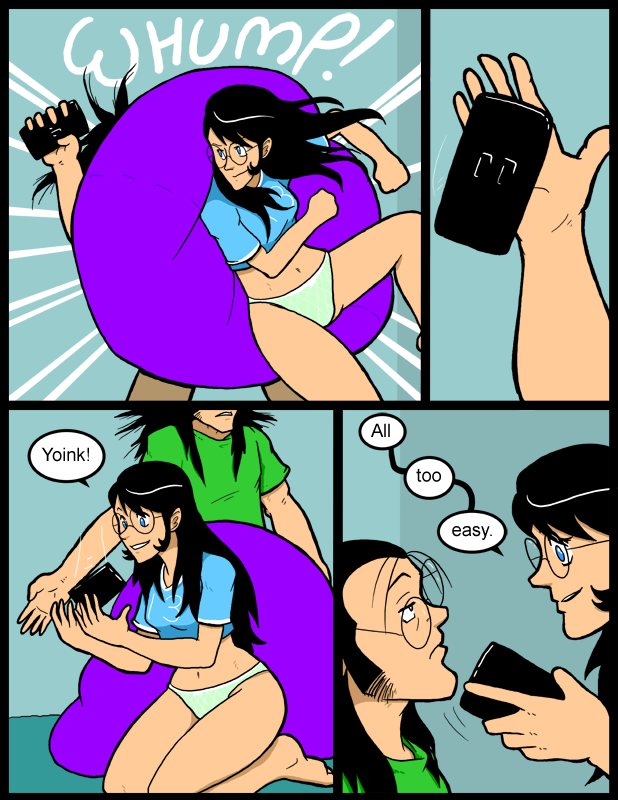 This page is a rarity in that I was editing it right up until I posted it. Usually I let the chips fall where they may, but once in a while I can’t bring myself to overlook certain things. On the whole I’m happier with the page now, but also resigned to accept my shortcomings.

In other news I saw the biggest spider today. It was one of those orb weavers, but it must be a male, or a kind I’m not familiar with because it was longer through the body than the usual ones. It was about 2 and a half inches long, or like, what, 6.5 centimeters? It’s legs were super pointy and skinny. They looked like a fantasy painting. It was as if each leg ended with a long shiny fingernail. I disturbed the web while moving a hose so it was clinging to the remains delicately. I felt kind of bad after because it’s posture was one of fear, rather than aggression, and had I seen it I wouldn’t have broken things on purpose.

The spiders are super big this year. I thought they were big last year, but man… We’re talking the first 30 minutes of Arachnophobia here. Plus they love building above doors. Massive structures dangling right above your unsuspecting head. DX

It is getting toward the end of the year, so I’d expect the spiders to be biggest around now.

Kind of wish I’d had a camera handy now. Maybe you could tell what it is. If I see another I’ll try to get an image.

I’d be willing to give it a try. It’s hard to get too close without a specimen, but I enjoy the process.

I’ve got an orb weaver living in my window I keep meaning to get a picture of, too. I enjoy watching it work on its web.

We don’t have many big spiders here this year. I think it’s because it’s been so cold up until today.

I should probably talk to you about something other than spiders sometime :)

I’m available through email, or comments, or whatever if you have something non spider related you need to tell me.

Literally just got done with an archive binge; I’m loving the chemistry between all the characters. So uh, are you averse to fanart?

In any case, awesome comic, I will be following and reading with interest. P:

Fanart is cheerfully accepted and often posted. Just check the blog under the strip for the old stuff. X3

Thanks for giving it a try. Look forward to seeing you around.

Well, sorry about it being so plain, hope it looks okay though (and not too out of character).

There is no way anyone with a reasonable familiarity with the English language would refer to that as “plain”.

Thank you! That means a lot, especially coming from someone with your skill! Do you have a website or deviantart or something?

Oh you. Haha, I’m a total noob, but thank you for the kind words!

Not much there yet, but my dA is: http://nyonai.deviantart.com

Plain or not plain, that’s one hot Nina. And as a fellow pencil-artist-dude, i can tell you.. that’s awesomely drawn. srsly.

Thanks – it’s actually digital, though I do love pencils (and have better control than when using a tablet).

Clearly the wrong one of us is drawing my comic. XD It’s very lovely. If I had the money I’d commission a whole set from you. Anyway, I’ll post it where everyone will see it tomorrow. Many thanks.

Ridiculous, sir. I’m just a doodler. But you’re welcome, and I’m glad you like it!

If you call that plain, I NEED to see what you call superb.

And she managed to do that while in her undies. That’s impressive.

And so, the epic struggle comes to an end…

Honestly I’m hoping she gives it back and apologizes. I want to like Jess, I really do, but you just don’t mess with a dude’s DS like that. Especially a gift DS he just got… what, the day before yesterday in strip time? Also I would like to see some other characters again!

I totally agree. She doesn’t seem like a dislikable character on the whole, but this whole grabbing her bro’s stuff really just hits me where it hurts. My sister and I were far too seperated in age for this to ever come up between us, but none the less I am very particular about my things, my electronics in particular. Sister or not I would probably beat her senseless with that pillow if not worse.

That aside though, very adorable bottom she has. ^^

And as an aside cause I want to be clear, I don’t have anything against your work at all, it’s just that I get so invovlved with good stories (like this one) that sometimes the actions in the story effect me very personally, and this is one of those times.

This reminds me of how my older sister used to sneak into my room at night to play my N64. It was the first console our parents ever let either one of us have, and even though it was technically mine my parents tended to side with her whenever they stepped in on our arguments over who got to play.

They also sided with her when it came to who got to pick what show to watch on the downstairs television, and when we both wanted to use the computer. To this day, I’m still very defensive about my personal belongings because of this.

My younger sister was always a master of fake crying to get me into trouble — and our parents always took her side over mine. Even when she took my stuff without asking (Or asked, was told “no” and then took it anyway), I’d be told to “let her play with it”.

And that’s not counting the times she got angry with me and tried to break my stuff out of spite — cue a teenage boy being told by his parents “Don’t make a fuss”, which meant “Shut up, you’re wrong, your opinions don’t matter and your personal property is hers to toy with and you have to accept whatever she does to you without complaint.”

I’m glad I moved out. I still mourn the loss of my beloved Animals of Farthing Wood book, which she decimated for a reason I can’t remember. I must have read and re-read that series countless times — except for The Fox Cub Bold. That book was utterly pointless. “You’re wrong!” “I’m leaving!” *adventure* “I’m back, and I’m dying.” “You’re still wrong.” “Why do you think I’m dying? The laws of fiction demand punishment in blood!” *death*

I, too, am very protective of my stuff now as a result. They’re mine, hands off, get your own. Hell, Jess, *buy* your own damn stuff. You’re nothing but a thief. As Chief Inspector Raymond Fowler once put it…

“The artful dodger was a thief. And I don’t think he’d have considered himself quite so “at home” in a juvenile detention center, which is where I’d have put him. Thieving is thieving and no amount of oom-pa-pa or boom-titty-titty will change that.”

Aha! So I’m not the only one who’s noticed how big the spiders are this year!

I, for one, welcome our new giant spider overlords!

They are super big this year, and even more plentiful than last out here.

For some reason, no one ever told me I had to do it, but every time I accidentially break a spider web, I apologize out loud to the spider in question. I’m not even all that sure why it has to be done just that, it has to be done. Tehn I’m left walking away wondering if there’s a point to what I just did.

im sure the spider would forgive you, if you got him lots of flies, and a mate lol

Maybe they can pick up on your tone.

Lol at the last panel i can hear the victory music from MW2 playing as she says”All to easy” and it looks like she knocked him into a wall, ouch!

For the record, I was thinking of Darth Vader when I wrote that. Which is also where the page title comes from. XD

I think we have golden garden spiders here, though I am not positive myself. Those bastards get big too. make huge webs that are at least 8 feet in diameter, for the bigger ones at least.

I am rather afraid of spiders. Strip ones clothes off if I know I have a spider on me, afraid. Swerve in traffic trying to see if the spider on my window is inside or outside, afraid.

I don’t like their closeness nor the chasing some of them do. But I am perfectly content to watch them spin a web. back when I smoked I sat out on the porch and watched one spin its web until I ran out of cigarettes and got depressed that I would never create something so beautiful in my lifetime. the next morning when I woke he had packed up and moved to taunt other people with his web.

I like dem girls that can fight. Strength is sexay.

Plus, she can tackle me without the undies on anytime she wants.

!!! what is with the word “Yoink”? i hear it everywhere, i see it everywhere and even i use it! and i don’t do it on purpose..it just comes out of my mouth. it seriously rolls off the tongue. great comic btw, in my personal top 10 list

Thanks, glad you liked it. As far as yoink goes I don’t know what its deal is. It’s been around for as long as I can recall.

My sources say it’s basically just a verb used in pop culture much like an onomonopia. It means to take, often with an emphasis on theft.

Were it so easy…

I have to say this, do not gloat until you are behind locked door. Especially when you are braless and leaning forward. One pinched/twisted nipple, and you’ll be on the floor in pain.

Hey, this wasn’t in my subscribed feeds.

if it were me i’d have already palmed the cartridge for mario cart. ds is worthless w/o a game and he only has the one