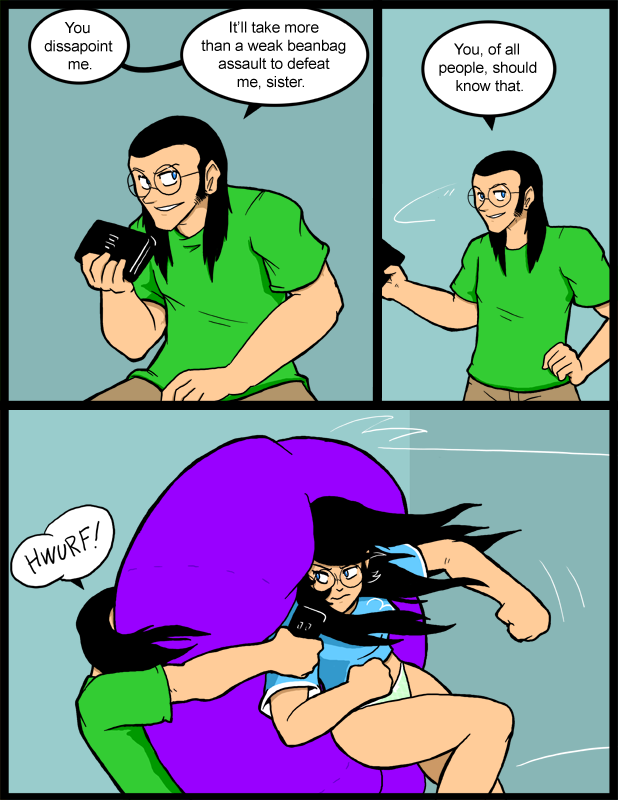 Sorry for not replying directly to the bulk of your soda ring comments. Most of them didn’t require my input, so I left them alone. It’s nice to know that I’m not alone in this habit though.

So, I’ve been getting Urusei Yatsura movies with my Netflix thingy. I can only get 2 a month, but I’ve seen 3 so far. With the exception of #2 I find that the movies are written like fanfiction. Not particularly good fanfiction either. It’s like late 90s Internet fanfiction before you could find a few nuggets of gold hidden in the mines. I actually own Beautiful Dreamer (#2) and I assumed that all the others would be of similar quality. I assumed incorrectly. The others so far haven’t been unwatchable, but I found myself not even bothering to read the subtitles half the time because I wasn’t invested in what was going on.

I usually watch anime subtitled, especially old stuff, because the dubs from back then are fucking terrible. Terrible to a point where you have to wonder how a person allowed them to happen. If the Japanese acting sucks you can remain blissfully unaware while still getting the emotional gist of things. That’s easily the best thing about DVDs. You can choose your poison.

Dubs are better than they used to be on average, but it’s a crap shoot. The stuff that used to end up on Cartoon Network tended to be pretty good. In fact, I prefer the English Big O to the Japanese. I didn’t watch a lot of it but Fullmetal Alchemist was well done. Samurai Champloo, Paranoia Agent, Cowboy Bebop, and FLCL were fairly well done. I liked Cowboy Bebop better subtitled, but I never saw the others on disc so my data is incomplete.

The Disney rereleases of the Ghibli movies are well dubbed too. Which is important since their audience is mostly kids who aren’t going to be strong readers. (The Nausicaa one is leagues better than the old Warriors Of The Wind abortion.) I prefer them all in their native tongue, although I have a special place in my heart for the original dub of Castle Of Cagliostro.

I really don’t like the English cast for Lucky Star. Even though they sort of fit there’s just something grating about all of them. I think there’s some overlap between Lucky Star and The Melancholy of Haruhi Suzumiya, but I’m not sure. The English cast annoys me less, but I prefer the subtitles.

Of course most of this is subjective, and all of it is unimportant, but it’s something to talk about at least. X3

I’m glad that DVD gives us a choice. (Or blue ray or whatever.)

Me and my friend argue weather subs or dubs is better, honestly i agree with you in every way, almost all dubs suck but a few are real gems (FMA, FLCL, Afro samurai) I prefer almost all ghibli films in English, though i do have subs of most, most likely due to the fact I grew up with the English versions, also because they’re generally well done. still though I stand by your side on this.

Glad to have you aboard. Is Afro Samurai worth watching? It looked kind of iffy to me. Is it something I should track down?

It’s kinda stupid. Its like samurai shamploo, and it has good dubbing…Honestly, its worth it but I’m not saying its as godly as FMA, or melancholy of haruhi suzumiya (story wise) Its one of those animes you just have to decide for yourself.

Pull in your arms, Ed! PULL IN YOUR ARMS!

Lol nice, she gave him a full body tackle like The Hulk, and as for sub’d vs dub’d. It doesn’t matter to me

There really is some overlap with the Haruhi cast and the Lucky Star cast. Both shows feature Rie Kugimiya playing the lead in the original Japanese, with Wendee Lee filling both roles for the dub. I’m positive there’s more, though those two are the ones that stand out the most.

Also, I just remembered that Wendee Lee also voiced Faye in the dub of Cowboy Bebop. Maybe you just need to avoid watching any dub where she voices a main character.

I seem to have a memory of not caring for something she did. Maybe it was Bebop.

I’m pretty sure it’s Aya Hirano for lead in both of those (Haruhi and Konata).
I luv Rie Kugimiya though.
But of course, those two animes are made by the same producers, who use the same actors on purpose to do some ironic cross-overs or guest appearances in Lucky Star.

Did anybody else hear “CHOO CHOO” sound in there head when they the last panel?

Ain’t nobody gonna stop that train!

Ha! The coincidences here are crazy.
The only Lum and Co. I own is Beautiful Dreamer (which is fun to watch). The rest were generally lacking.

Dubs generally annoy me, but there are some good ones. In my opinion, it is just so very hard to avoid making the flow of natural speech sound WRONG, when you are working with such strict timing issues and a vastly different language. And that is with the ones where the crew cares and tries hard!

Cagliostro dub also gets a special nod from me. I just love Lupin’s voice in that, and the juuuuuump sound effect STILL makes me smile. :)

I hope you get around to Maison Ikkoku at some point. By far my favourite Takahashi work. Single-handedly kept me a comic book collector for years. I even own a Piyo Piyo t-shirt. :)

I have a few single issues, but never went after collections. I enjoyed what I read. Maybe someday I can get some trades.

Did you know they made a Dragon’s Lair/Space Ace type video game out of Cagliostro? Saw it on some arcade (the uprights) video game competition show way back in the 80’s.

I saw it at some point, bit at the time didn’t know what it was. It’d be cool if they put it on iPod touch like DL/SA.

me and my sister could not stand to watch the re-dub of my neighbor totoro, so much so that we dug up our old vcr and watched the original instead. i dunno if the new one is technically better or anything, but it was pretty much just a crude imitation of one of our fondest childhood memories. the opening song was way better in the old one too.

Wow I had no idea anyone liked the original English dub of Totoro… I found the girls’ voices to be teeth-clenchingly grating. Of course that’s one I prefer the way I originally saw it, in Japanese, anyway.

I like the Disney dubs in general, especially Mononoke, but the dub for Castle in the Sky was also re-scored, and I liked the original score better (it was more spare and less “Hollywood”y) so it bothered me no matter how good the voices were.

And I liked the English dub of Cowboy Bebop a ton better than the Japanese version at first, mainly because the Japanese voice actors were the same voices used for every anime ever, and the English cast was new to me at the time. Of course nowadays, those same English actors have been in everything, so I’m not sure if I would have the same opinion on re-watching it.

I wouldn’t necessarily say I like it, I mean I know it’s terrible, but I’ve been watching it since I was like 2, it’s just ingrained in me. watching the re-dubbed version was like listening to a song that’s off key.

Yeah, when you’re that little it’s like you imprint on it.

A close friend of mine debates subbed vs. dubbed to me all the time. If both options are available, I always choose dubbed, and she always chooses subbed. I get the arguments for subbed, I even agree with most of them. What it comes down to is that, unless the job is so horrendously awful it makes my ears bleed, I’m just too lazy for subs. I don’t want to have to rush to read the dialogue, then look up at what they’re doing while they’re speaking, then look down again because oh wait, they’re still talking.

Sometimes, though, just for fun, I’ll watch something subbed AND dubbed. It’s interesting to see the differences in translation.

You should check out the differences between the hearing impaired subtitles, the dialogue, and the regular subtitles sometimes. Sometimes they are all different.

Me I like it both ways the funniest thing of all is when you watch it in english with the subtitles on then it gets hiliaorus. Even when its not supposed to be. Try ghost stories orginal is a serious paranormal series, english version puts me in the mind of south park as i said funny.

The english cast of Ghost Stories is. from what I remember, a total parody that had my sister and I laughing pretty hard. If you can find a DVD with both tracks that isn’t $24, like they are at my town’s Hastings, and is a reasonable price, I’d recommend picking it up.

I personally prefer subs to dubs. You get a cleaner interpretation most of the time with subs, and you don’t lose so much of the original inflection. You can hear how the original actors actually sounded, and together it’s almost like you’re actually hearing them speak it. At least for me ^.^

Yeah, I feel the same way.

Hmmm. You changed your links page around. The Space Between is no longer listed. Did you get into a fight with the author or something?

Yeah, we faced off in a wheat field, early in the morning. Our blades deflecting the first rays of light as we prepared for the final battle…

Alternately, I deleted a line of code while shifting the others around, then didn’t realize it was gone. I’ll have to fix it at some point when I have a minute. I doubt my link accounts for much of his traffic anyway.

When it comes to Dub vs Sub, I prefer passable dubs to subs. I like to be able to sit back and watch anime without constantly reading, but when I know the dub is terrible I’ll just swap out to sub. As you said even if they’re putting on a bad performance in the sub, I aint gonna frigging know cause I don’t speak Japanese.

Each has their own advantages: subs usually get released quicker and has less goof ups on the translation but dubs (good ones!) allow the transition of the tones/emotion/sarcasm to come through and the user doesn’t have to be aspeed reader to watch them That being said I have a list of 30+ good english anime dubs on my youtube site (same as my sig name) if anyone wants a list

RWBY is in with the anime on Crunchyroll, even though it appears to be of American origin. I wonder if they dub it or subtitle it in Japan.