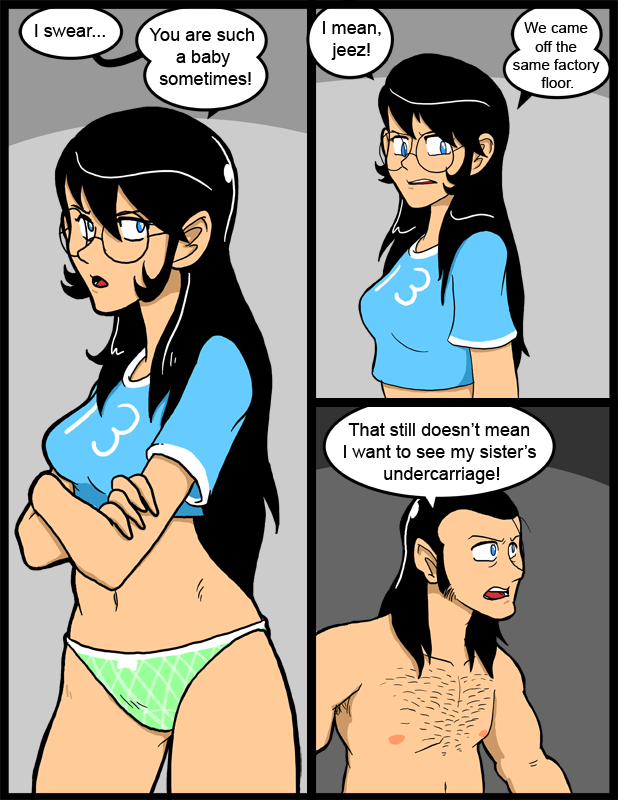 Looks like the weather could potentially throw off comic making again. It’s just that time of year I guess. I need an underground bunker, with its own power supply, where I can cobble together these pages without worrying about the wind blowing. If I was crazy rich i would find a hill above the flood plain, hollow it out, and make a Hobbit hole for myself. I mean it would be on the grid, but there would also be a power supply for just me in case of inclement weather. Around here nature pretty much throws 2 things at you: water and wind. If you plan for those two things you’re pretty safe, but a lot of people still just have houses on low ground, or with no basement. Seriously. I mean, in California they make you enforce your buildings to handle quakes. All structures in tornado alley should have basements at least. I’m sure I’ve said it before.
There’s a weather station some miles from here that’s almost a Hobbit hole. Dirt is all mounded up on it. The thing is that mostly tornadoes leave hills alone. They just kind of walk across them, but don’t fully investigate them. Which makes “Project Hobbit” a genius idea. You can live underground around here because we have only tiny earthquakes. As long as you don’t build in a hole where water can get you it’s perfect. Your power source has to be external though. It its own place so you don’t get fumes, or what have you, killing you like that. Also you have to test for secret gasses that sneak in and kill you, like radon.
I used to live in an apartment in Kansas that was basically a pile of cleverly stacked branches. No basement. So if the winds came, and they did, I just had to stand around waiting to get tornadoed. No shelter was provided. That is total shit. There ought to be a law.
Maybe I can make that my cause. Legislation to make sure everyone has safe harbor from tornadoes. It can be called “Project Hobbit 2: The Hidening”

I totally want to see it, personally.

As a fellow Kansan, I sympathize with you. A lot of residences in my area were built over 100 years ago, so it’s hit or miss if they could afford to build a tornado shelter back then. I know I don’t have a tornado shelter, but my mother who lives caty-corner (or however you spell that) across the street from me does, so as long as it’s not one of those no-warning torndadoes like the one that took out Greensburg, I can get over there okay. If not, I’ve got a closet I go duck into to ride the storm out.

Okay, that out of the way, time for the comic… I guess men are forever destined to make car references to women, even their sisters, but my sisters would be reading me the riot act, not complaining about my desire to have them cover up after seeing them prance around in their underwear if I were in Ed’s shoes. Also, I must ask about the “team bisquick” tag on the comic… I googled it with the safe search off, I couldn’t figure it out, what does it mean?

As far as I know it doesn’t mean anything. I saw some thing about Twilight and I guess there are teams for the main dudes, or something. I was thinking about biscuits, then I remembered a part in The Critic where one of the character’s brother was named Bisquick, then my brain decided to combine all of these things together to make Team Bisquick. After that it was just in my head and I typed it in to the tag field because as far as I can tell no one ever notices the tags. I WAS WRONG! XD

I noticed it during this latest thread, wondering if there were some brother/sister implications since using Bisquick for biscuits is easier than starting from scratch, thereby your sibling is easier than some stranger, or if it was some weird reference about Jessica’s “muffin” that I was missing.

As toward Twilight, I’m “Team Twilight Is Stupid” (as I first saw on the webcomic Joe Loves Crappy Movies), because I first heard about the movies, and they seemed like Forever Knight gets lobotomized and mixed with Dawson’s Creek.

Just realized, someone else who knows about Forever Knight!

Wind and rain… Florida? We got a Tropical Storm barreling down on us hear, so…

You need strong above ground shelters. Too much ground water.

Well as a fellow brother i have to say, that i wouldn’t have a problem looking at my sister, but anything more … *shudder* … were is my rope again?

Where I live in Texas there are barely any basements. I think it’s because the ground shifts too much, they would require a bunch of upkeep.

Well some solution should be found. By science!

this couple is funny but no fun :(

They are a tetchy pair.

I live in southwest Oklahoma so I feel your pain Crave. This time of year is always exciting for us and we dont really have basements here either.

The section of the country affected by that stuff is significant, and no place seems to have any laws about shelters.

Well, I suppose that could be a potential target market for all those land based nuclear missile bases that the government still has up for auction.

I was actually going to mention that. I keep seeing news stories where decommissioned underground missile silos and nuclear bunkers are up for sale. Most are in pretty good shape, nicely-constructed, and some have already even been retro-fitted with residential amenities. Thing is, they’re usually only a little more expensive than a comparably-sized home would be. But you get to live IN A MISSILE SILO. To me, if you’re not one of those sun-worshiper types who needs Vitamin D streaming in the windows constantly, it’s kind of a no-brainer. I’d love to live like that.

A spot of googling turned up a page that lists a site for sale in Oklahoma, with some pictures:

That would be a pretty sweet house…

Too funny, or just funny enough?

I feel your pain too. Rural Florida…wind blows, power goes.

You never hear much about inland Florida.

Probably because we lose electricity the instant there’s so much as a cloud in the sky. FPL sucks. *shrugs* That or it has the lowest literacy rate in the country. Tough for reporters if they can’t read.

You’re not wearing a shirt, stop being a hypocrite!

Anyway, hope the weather picks up for you. Unpleasant weather is unpleasant.

He really does need to cover those sweet tits. It’s scandalous!

I LOVE the punchline. You are on a roll with these last two strips!

Hope I can keep it going. XD

I wouldn’t lose any sleep over it if I were you.

She has impeccable logic.

About your hobbit hole idea, radon, and other gases such as it, are generally heavier than air, else they’d just escape when you opened the door. It’s also why they build up in basements. There are two solutions to this. First is have it all at a very slight decline towards the door. I mean even just a 1 degree should be enough, since it’ll run to the door, and go out when you come in and out. It takes a while to buildup to a dangerous amount, and even if it did, the solution would be to open the door and get fresh air. The second would be to have a vent system below the floor that would allow it to sink under it and have it piped outside that way. To the internal power solution, again vents. Build a decent sized room for them, and give them vents that lead up and way outside of your hill. Their gases are generally lighter than air, so they couldn’t build up that way. A simple attic fan would help too.
Now to address the comic. Either she is way too calm about this, or he is way to freaked out. Either way it’s a bit creepy.

Yes. Creepy is the desired effect.

….I really like panel 2 for some reason. The expression on her face is just great to me. Does that make me a masochist?

sandra bullock for instance. i’m sure her angry face is the same as her sex face. okay i’m like 90% sure… gonna hafta call jesse james on this one…

No, I mean imagine if a girl was dressed like that, giving you that look, then bit you. I think most people would assume it’s foreplay.

Depends on the nature of the bite.

Dude, I can strongly support that project. That is a wrong that needs to be addressed in every single state that gets hit by twisters. Bravo!

Uhhh, that would be most of the states in the Union.

That shouldn’t make it any less important. It’s like having apartment buildings sharing walls all down a strip (as a fire hazard).

Happy to be of service. Thanks for giving it a chance. :]

This seems like the beginning of a Japanese incest manga. Just saying, leave your options open.