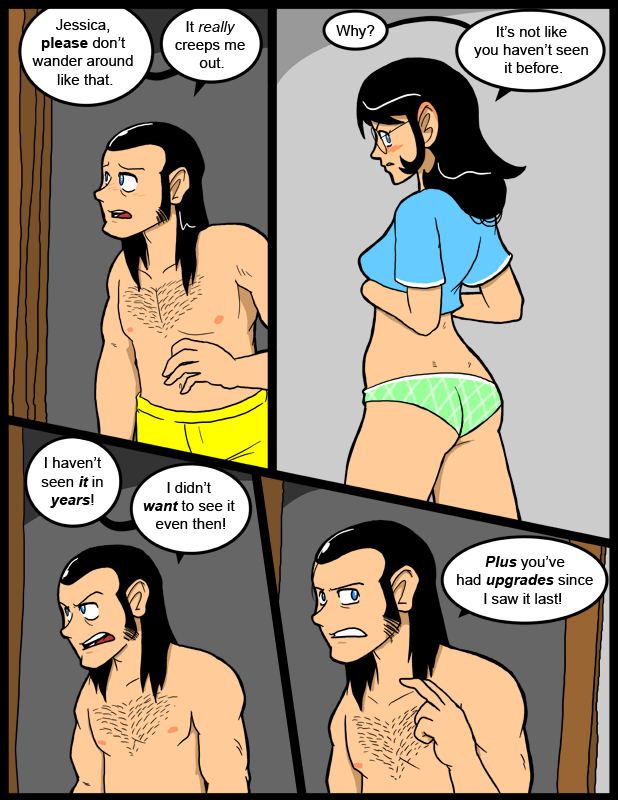 The weather is really upsetting my groove. It’s been lightning storms in the evening for a few days now. Having to wait out the storms cocks everything up. I like to work on comics in long uninterrupted stretches. My PC is on a pretty good backup battery because even when the weather is normal the power grid out here is ultra shitty. Random surges will destroy anything delicate if you don’t put a good protector between it and the wall. I lost a few things to the demon of the grid before I was clued in to its brutal nature.

I decided to switch from Netflixing classic Doctor Who episodes to random anime I haven’t seen. The first thing I got was Urusei Yatsura movie 4: Lum The Forever. After watching it I’m still not sure what the hell was going on. I’ve read some of the comics, and seen some of the TV anime and one other movie, and they made sense, but this one… didn’t quite do that. The descriptions said as much, but I was unprepared for just how little held the “plot” together. At any rate it was neat to look at, even if it was little more that a Japanese acid trip.

I may watch it one more time just to see if the crazy was all on their end or if I was just too tired when I watched it.

Anyway, those of you familiar with Urusei Yatsura will likely notice design elements lifted from that series even in this very page. As I’ve said before, Rumiko Takahashi’s work was an influence on me for a long time.

She was just as embarassed when she realized the situation as he was, i dont get why shes trying to make him the bad guy

I think, based on the character, and the way she looks after Ed tells her that. I think she’s more mad than anything else.

I think it’s just that she’s embarrassed, and she’s deflecting her embarrassment and shock at being seen in such a revealing act and channeling it back to him. Also, it could be that she sees it as him being somewhat prudish, or holding her to a different standard (he’s walking around in his undies too)

There we go. I knew someone would get it eventually.

He is being somewhat prudish but she was doing something embarressing too.

I’m a bit confused. Wouldn’t you call them “them” instead of “it”? o.o
>> II haven’t seen them in years.
>> You’ve had upgrades sine I saw them last!
It sounds weird with “it”

Or is it “it” because of “the dancing” or “wandering around” which is referred to? o.o

I’m fairly sure “it” specifically means “Ed’s sister’s naked body” in this context, not her chest specifically.

You are probably the only person that has ever drawn long hair accurately when a character is in the process of putting on a shirt. Pro.

I notice these things. Nice work.

I kind of did it without putting a lot of thought int to it. XD Her hair is so long it wouldn’t just flop itself out. She’d have to fix it herself.

I am afraid to ask … how many did these upgrades cost?

Those were God’s own work, son.

Am I the only one who thinks she’s rather…disturbed of a person to wander around mostly-naked knowingly in a house that she shares with her brother?

I was suspect earlier in comic, but now it’s even more. I think something might have happened a long time ago. Maybe. Or maybe I’ve reread Jay Naylor’s Better Days one too many times. Or maybe I’m just perverted like that.

I’d go with the latter.

Aww, boobies go away. That’s like the saddest thing in the world. The only thing this strip is missing is a crying puppy.

It is saving kittens though.

I’ve known people who wander around nude at home before, even around family. Apparently Ed didn’t realize he had that kind of family…

You sir are in need of a High-five for that comment!

In the last panel is Ed pulling on a collar of a shirt he is not wearing? Rodney Dangerfield style?

You know he doesn’t get any respect.

He’s doing this hand gesture that I realize I can’t explain in words now… It’s a thing I do to wave something away.

No, go on, please continue to walk around like that.

Did you see this? Is it Carol? http://www.snorgtees.com/someoneisreadingmyshirt-p-984.html

If Carol were a real person, I would send this to her.

The link or the shirt?

Not familiar with her. I assume you mean the model. She’s definitely not Carol. X3 Certainly a similar body type though.

lovely as always mate. you brighten my week every time i come on here. definitely good for a chuckle

I’m just impressed you remember to color the tips of her ears when she’s blushing! That’s awesome. Well done!

Now that I can color faster I have time for more details like that.

Lol yup, love this comic, for the laughs, not the boobies, but they do help :D

As long as they don’t hinder I think we’re good here. X3 Many thanks for reading.

oh one more thing, HAHAHAHAHAHAHAHAHA at the term upgrades, like she was wheeled into a auto garage and given an overhaul like this was GTA LOL funnuh!