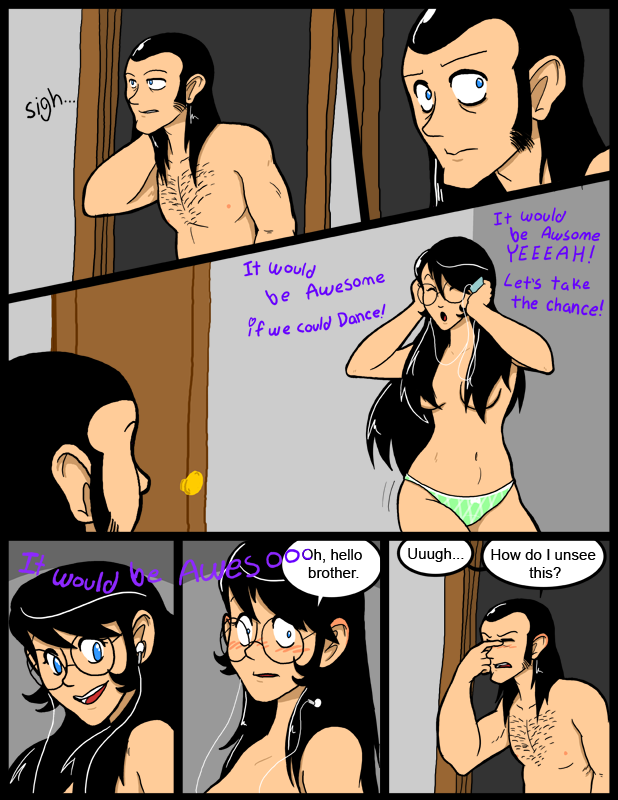 So…  Dragon Quest IX.  Heck of a game.  Has a nice DQ8 feel to it, while being different in good ways.  It has a sort of Monster Hunter style multiplayer thing.  Well, at least in so far as you can go into someone else’s game and help out.  I will likely not be able to ever make use of it, but I bet it would be cool…  T^T

You get to make your characters.  All of them if you want to.  The choices are kind of limited, but I was able to construct a decent Jolene to be my heroin.  When given the chance I added Nina, Carol, and Reggie to the party.  It’s hard to make good male characters.  All the options are super Dragon Ball Z looking.  I mean you can make a fair portion of the cast of DBZ if you were of a mind to.  My cast, not so much.  If you were a big fan of Krillin this is the game for you though.

So far the difficulty curve  is just right.  You need to scrounge for cash from time to time, but don’t have to do it so much that it gets tedious.  In fact, you could play most of the early parts without adding any other party members if you wanted more of a challenge.  Whenever you equip armor or whatever it actually shows on your party.  That’s something I like a lot.  I have this weird desire to play dress up in games.  In fact I’ll sometimes pass up better armor if it looks dumb.  Except for I made Reggie wear a dumb hat for several levels.  XD 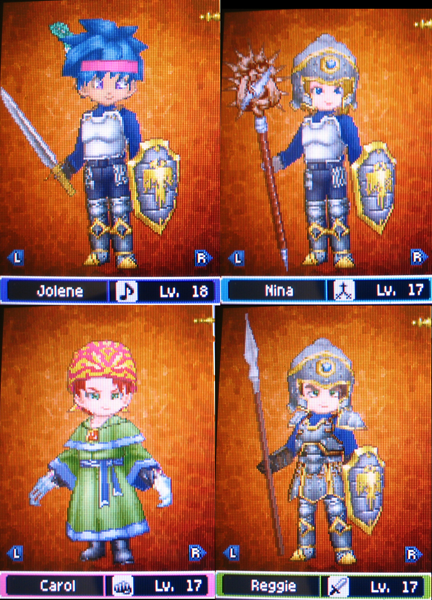 TWO almost boob shots in one chapter so far!? All I have to say is………..
*Puts on shades*
Keep em comin!

I still have to say dude, awesome softcore-ness.

No! Thats not how its done! Here, I’ll show you:
I guess this is the…
*Puts on shades*
Breast strip yet!
YEAAAAAAH!

It’s very simple Ed. You simply place your memories of the even in another’s head, in a process called Transference. I’m pretty sure others wouldn’t mind seeing that.

Also, @Crave: What was with that Thomas/Carol thing? I was thinking either a)rapid, over-night art style change or b) guest comic.

I was leaning more towards b) when I finished my archive binge about 30 minutes ago, but since you just posted this page minutes ago it seems to have confirmed my suspicions.

I honestly have no idea what you’re on about, dude.

If it helps, I don’t know what he’s talking about either.

I think what he’s saying, is that he finished reading it all through 30 mins ago, and thought the last few strips were done by a guest artist, because they looked different.

Those last couple of comics before this one, with Thomas and Carol, had a completely different art style. Was it you just trying out something new or a guest comic (because you mentioned it in one of your blurbs)?

XD Well, to me it looks like what I always draw. If the style is different it’s just natural progression. I try to do better every day. I only ever got one guest comic… which I keep forgetting to run on the underblog. :B

Of all the women in the world to walk in on dancing around in their underwear, one’s sister certainly isn’t at the bottom of the list, but it is definitely in the bottom half.

Using my favorite band to get me to read is a low blow. I’m already checking every update, what more do you want of me?

Eagerly awaiting Zodiac to come out too, one album a year makes Electric Six a work horse of a band.

I want you to go on to random message boards and such to tell people how awesome my comic is. Learning your intimate details is just one part of a much grander plan, and not a coincidence in any way. In fact, if that thought was creeping in to the back of your mind I want you to put it out right this second.

Hahah… How do I UNsee this? Gentle sir, boobs are one of those things that are forever stored in your mind. Forever.

Like if your mother leaves the only bathroom door unlocked and she’s just gotten out of the shower and you just came in from outside and didn’t know she was in there. Yeah, the image just won’t ever GO AWAY. . .

Yes it can. We invented alcohol for that very reason.

That’s what Danimal’s yogurt is for.

This reminds me of a time that I’m glad I didn’t do something. I had intended to stay over at my oldest sister’s house after work since my other sister was in town and staying there. It’s a really, really good thing that I didn’t go. They were drinking and my visiting sister decided it was a good idea to parade around the house naked.

Is it mere luck, or evidence of a divine hand…?

More like a normal hand led by a dirty mind. But hey, you won’t hear me complain!

hmmm… I see there is another Alex here…. no matter.

I can see where I’m half right, and another cheesecake shot what a way to start off the week. Come on Crave, don’t spoil us now… actually… go right on ahead.

You Alexes will have to either fight to the death or find a way to distinguish one from another. I suggest colorful hats.

No, no, no not colorful hats, colorful cats, or perhaps some sort of fancy dress

I’m a lover and not a fighter. So I’ll wear the smoking jacket.

The secret is to beat yourself in the head until you forget why you’re abusing yourself.

worked for me and I’m fine

While not exactly what I was hoping for, this certainly does not disappoint! I mean come on, it had Ed, hilarity, two sets of wild unrestrained hair, AND tits. That’s about as awesome as a Nina-less strip can get.

The real creepy part is that it seems like he stands there and stares while she sings for a while.

Without glasses and in the haze of the morning it takes the brain a few torturous moments to decide if it’s really seeing what is in front of it.

Yeah…. To be fair at least it wasn’t a step parent or something….. *shudders*

Or someone from his family opening the locked bathroom door while you’re in the shower….. That is beyond concerning.

Also they are twins and I bet they’ve shared baths together before. He might just be more disturbed by the music than the naked dancing.

This comments hints a a dark backstory indeed.

Apparantly in our old house my step mother could undo the lock on the bathroom door to retrieve something from there. I was having a shower. It was also one of those cubicle showers with see-through doors. She seemed unconcerned that I was in there. I however freaked out.

Well, that’s not as horrifying as what my brain constructed thankfully.

Glad i could put your mind at ease.

sexxxaayyy. and that’s all i will say.

Your second comment part made the first part a lie. A LIE!!!!

Reggie’s dumb hat, was it the Tree stump thing? or the Slood? is there a dumb hat I missed out on? Dragon Quest IX is awesome. Great comic

He had the stump for a long time. It looks terrible with everything.

Yeah my Warrior got stuck with the stump too. Most of my party was based on friends so my girlfriend was stuck with the Slood for a bit. She was none too happy wearing about the slime on her characters head but at lest I didn’t force the rest of the slime outfit on her.

it’s practically a safety setting, like seeing Medusa in a mirror.

Wow. You’ve been getting good at your anatomy, as we all can see.

WHAT HAS BEEN SEEN, CANNOT BE UNSEEN.

Better at any rate.

You take the spoon.

>use spoon on brain

You can’t use the spoon with that.

>use spoon on eyes

You gouge out your eyes. Yet the images remaaaaaaain..

Been reading this strip for a while, and loving it.
Haven’t commented before because it always seems like someone beats me to what I want to say; but not this time!

I just want to say that your DQ IX Carol is spot on.

Dammit!
You beat me on that

I understand his perspective; but for most of us, I’m sure it’s, “How do I see that again?”

On another note: shirtless Ed is sexy. I am straight, and I am a guy. But I don’t give a damn.

Ugh. Reminds me of my ex-almost-in-laws, where the almost-mother-in-law and almost-sister-in-law both weighed about 450 lbs and walked around naked around the house… dusting and picking up clutter… with excessive bending-over action… *turns green*

Thanks for that mental picture. My *ahem* how-do-you-do, has now become an innie.

HEYYYY You do this all the time XD I mean look at you in your underwear WELL IF YOU CAN GUESS WHAT XP!!!

Lol, love the way the headphone pops out of her ear, also, the boobs

I 2nd the motion

I’m all over that motion.

Hey, just wanted to say I slogged all the way through the archives and I think your comic’s pretty sweet. I liked the “cinematic” panels a few pages ago, and where the characters break out of the panels a few pages before that, and in this chapter where you had different points of view (over the shoulder, etc) Favorite character is Carol, easily!

Thanks for checking it out. I experiment with different stuff from time to time just to see if I can pull it off.

Looks like this chapter is going to be an interesting peek into everyone’s lives outside teh store. I was worried it woudl just be about Carol and Thomas

This chapter isn’t even a cohesive thing. It’s just little bits of story that have no larger framework.

lol poor Ed, lucky us, that can not be unseen im afraid, and i feel his pain. word to the wise, never look at pictures on your sisters pc, NEVER!

XD I would never have thought of that. Good advice.

Lol if its a relative yeah I agree.

Holy mother of god. My reaction to this was like Ed’s a couple strips ago. Are you trying to make my eyes pop out every time I open a new page. Maybe I should be taking your comic in small doses.

On the subject of DQIX, Akira Toriyama actually did the character design for that. So that’s why everybody looks like their DBZ, and why high tension exists.

Ed in the morning makes me think of a dwarf/elf halfbreed and Legolas was the father.

Man Jess is real sexy. Those are some nice boobs and a nice belly.