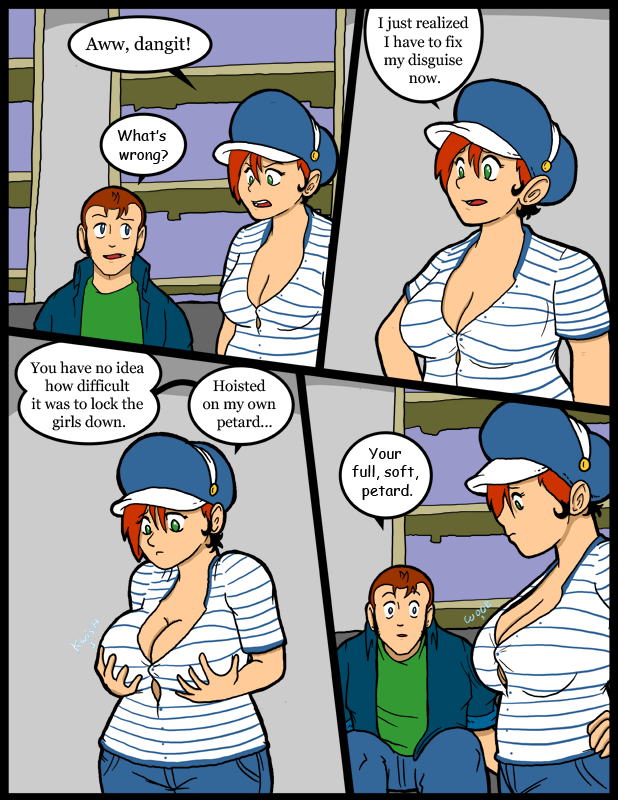 The other night I couldn’t get to sleep so I randomly decided to watch an old Ranma 1/2 DVD I have.  I had some older ones, but they were from back in the days of the VCR, so I don’t really have the equipment around to watch them anymore.  I had forgotten about how much I loved Rumiko Takahashi’s stuff.

My memories of Ranma and Lum are mixed in with a past I’d just as soon forget.  Apparently enough time has passed that I can disconnect them from that time now.  I dug out my old Ranma collections and decided to see if they actually finished their run in America.  It turns out they did back in 2006.  I was only 2 volumes away from the end when I stopped buying them.  XD  They haven’t even increased in value since then.  They’re still $10.  I had some giftcard money left, so I decided it was time to finish things up with that series at long last.  The books should get here tomorrow.

Ranma 1/2 volume 1 was the first manga I ever bought.  There was a mail away form in the only SNES Ranma game they ever released in the U.S.  It was a transformative experience  Reading that book for the first time.  Back then Japanese stuff was still foreign.  The only stuff we got was so mutilated by the time it got here it wasn’t even the same thing anymore.  Ranma 1/2 was pure Japan.  It may as well have come from another planet.  Nudity was treated like something that just happened from time to time, rather than a poison that would blind anyone that saw it.  It was no big deal if Wolverine gutted someone on screen, but God forbid he see a tit…

Even though at the time it seemed like Ranma was so totally different in retrospect I can see similarities.  It’s essentially a superhero comic.  They don’t fight crime or whatever, but the cast has what amounts to superpowers.  They just concern themselves with petty rivalries and matters of the heart.

I could go on and on about this, but I doubt I’ll be saying anything someone else hasn’t said before, and more eloquently.   Manga and Anime are part of our culture too now.  Certainly not as big a part as in their homeland, but we aren’t a world apart anymore.  That’s a good thing.

Transformers do not work that way.

If you’re looking for an actual resolution on Ranma 1/2…. don’t.

It’s one of Takhashi’s worst non-endings. It aggravated the hell out of me.

I don’t think any of her long stuff actually has resolution. In any case I just want the collection finished, and to have that particular sense of closure.

Her long stuff doesn’t ever have a resolution, and her characters’ development tends to stagnate rather quickly compared to the length of each series. Still hasn’t stopped her from becoming the best-selling female graphic novel artist in the world, though.

Yeah, pretty much the only one that I can think of that actually ENDS is Maison Ikkoku. Fan-freakin’-tastic ending on that one, though.

not sure if it’s entirely relivant, but the line is ‘hoist by (one’s) own petard’, not hoisted on.
a petard was a bomb, essentially, used to bring down the walls of castles and such in sieges. to be ‘hoist’ by one’s own petard refers to such a device going off in an unintended fashion, usually prematurely, and taking those tasked with it’s employment with it.

in light of that, being ‘hoisted on’ one sounds more like someone picked one up with a crane while you were sitting on it or something… (also not a particularly good thing, mind you.)

none of which matters terrible much.

on the subject of Ranma 1/2, I’ve only ever encountered it in fanfiction. originally cross over fanfiction. sounds like a terrible way to first encounter something, but with a little luck and skill (ok, substantial amounts of luck and very little skill) it was some of the 10% worth dieing for. (in the context of ‘90% of everything is crap’). been reading anything Good i could get my hands on since, Ranma wise. (one of the better ones I’ve read so far had the spring turn Ranma not into a girl, but a succumbs. a little hate for Genma and love for Shampoo later, it all works out very differently. )

I’ve also noticed that the better Ranma fics tend to sink the Ranma/Akane ship as quickly as possible. that and everything i’ve read about it (combined with the utter insanity of trying to collect manga or anime here, especially non-current stuff) leaves me with the distinct impression that it’s something best enjoyed filtered through the eyes/minds/whatever of people who liked it the first time :D

The phrase hoisted on your own petard is a bastardization of the correct phrase born out of the misconception that a petard is a spear. It comes from an understanding of the meaning of the phrase from the context rather than the actual source. It evolved from the original phrase because in modern English hoisting can be associated with raising an enemy on a spear. The ammended meaning is to have one’s own spear turned on oneself. Conceivably Carol is unaware of the correct phrase having only encountered the incorrect version her whole life. In fact, I’d get used to seeing this version because it’s passing into parlance while the true idiom is fading away.

That is exactly right. In the 34 years I’ve been alive this is the first time I’ve been corrected. I’ve gone all this time knowing only the bastardization. I’ve even read it in dictionaries and books. XD I’ve passed my ignorance on to my characters too. Although, I have to say the incorrect version sounds better to me since that’s how I’ve always heard it.

hey, it’s hoisted with your own petard, not hoisted on. A petard is an explosive device (french), so you can probably see that being hoisted with it is a lot worse then being hoisted on it. Shakespeare’s use of the phrase dropped the d at the end, thus making it a pun on farting.

I found this info on Wikipedia.

Even with boobs smaller than hers it’s hard to bind them down. I tried. It didn’t work as well as I’d hoped.

I suspect my maths concerning binding of the breasts are a tad cartoony. I haven’t had enough hands on experience to achieve the desired level of accuracy.

No… I figure if you lie on your back and pull as tight as you can you should be able to do it. But on your own its a little bit tricky. Kinda like a corset. She may need help doing it again. So your probably close to what happens.

Yeah, this is totally hitting my brain’s nostalgia center. Ranma 1/2 was my first manga too. We had one little music store in town that happened to carry a handful of anime VHS tapes, and I ended up buying the first movie: Big Trouble in Nekonron China. That was a terrible intro to the series, but it was peculiar enough to pique my interest, and I started seeking out more. Eventually I found a random volume of the manga for sale at Media Play and jumped on it. Some of my first serious creative works were Ranma 1/2 fanfictions. *shudders*

Was the double-entendre with the Family Guy episode intentional?

I was aware of the episode, and knew the connection would be made, but it has nothing to do with it per se. It’s just a variation on the same pun.

Transformative…no pun intended right? I never got into the Ranma 1/2 series. I stuck it out with the 160 episodes in Inuyasha. They recently finished the series in 26 episode bit. I liked it.

I’m wondering HOW she got the girls down, with out a bind or even a overbust corset.

Bandages. She was holding them earlier.

I just wish we could see her bosoms free from that restraining clothing.

How’s that old saying go? If wishes were horses beggers wouldn’t have to walk. I’ll tell you this much, my inbox tells me you aren’t alone in that desire…

Well hey, least you know what to do when if the comic ever goes low on viewers…doubt it will, but always a persistent thought, for any that go into creative fields.

There’s also an old saying that says: good things will happen to those who wait…wait my friends, and you too shall witness Carols…tits (I took about 5 minutes trying to find a nicer word that tits, sadly my vocabulary list for tits isn’t at its peak right now…)

Yeah, I know how to pander if things go south. XD

Ok, this is from mid field but, how do you pronounce ‘Wohlenhaus’?

Oh yeah! Also, have you ever considered using a font from Blambot ? They have several nice free ones that could compliment your comic.

Um… http://www.blambot.com/ just look at that since I failed at xhtml…

The American pronunciation is Wool-in-house

First of all, what you mean to say is typeface. Font refers to the size of the text. 15 point happens to be the font I use. XD Although I can hardly claim the moral high ground here since I don’t know how to properly use common idioms…

the typeface thing is one of those “if you tell me I’m doing it wrong I’ll just dig in my heels to spite you” subjects that I mentioned in a previous post. I am unreasonably amused by how much using the default typefaces annoys some people. Schadenfreude is pretty much the only reason I don’t use something else.

I have a similar complex where I use spite in a way to be productive. My excuse is that it motivates me, the truth is that I’m a son of a bitch.

A font is actually a complete set of type using one size and typeface. So your font would often be point15 of whatever standard typeface you use. To be fair, the belief of the majority tends to become what matters(look at the word ‘queer’ for example) and arguing over semantics has no point unless you are unable to understand someone/something.
All the programs I use for works have, what you call typefaces, listed under menus labeled Font.

If you REALLY wanna spite the masses, go back to using comic sans. Though that might cause self injury as well…

I haven’t stopped using it. That’s Thomas’s one. Because people hate it most of all. XD

this comic makes me feel happy inside, for a variety of reasons: it has hilarious situations, it has dynamic characters, it’s nerdy, and it has epic sideburns, plus Carol reminds me of me physically and personality-wise!
thanks for keeping up this awesome comic!

You’re welcome. It’s important that people get a regular dose of sideburn.

Ranma was my gateway drug into Anime. That and bubble gum crisis – both of which they had at the video rental shop when I was in middle school

Been there. Sometimes it’s hard keeping them locked and loaded.

Must be hard to be busty.