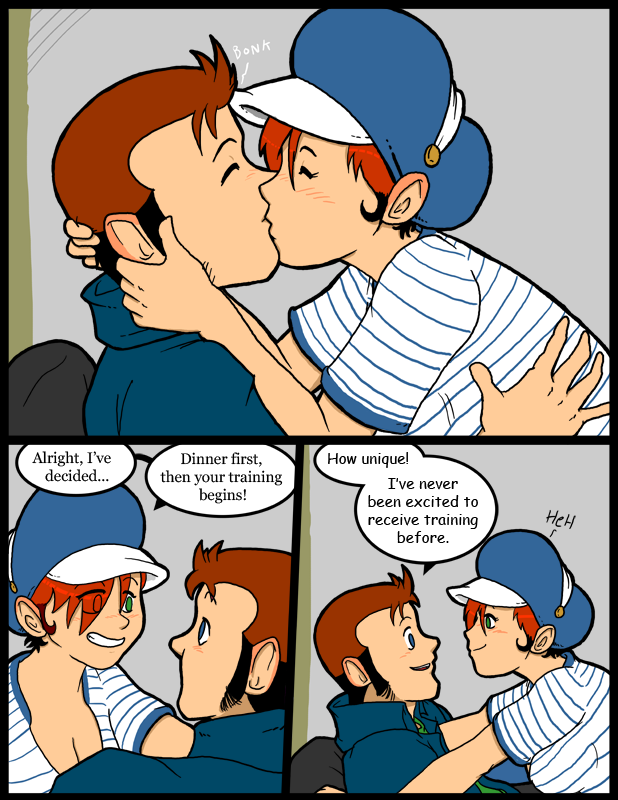 You guys guessed some of the most randoms stuff about what was going to happen next. It’s a shame I do these so far in advance. I could just let you all write the next page for me if I could work that way. XD

So, seemingly as if in response to my cry for Nintendo games to be excited for my latest issue of Nintendo power was an RPGcentric issue. First on my list of games to anticipate: A remake of the second Fire Emblem game. It’s based on the continuing adventures of Marth, which is good cause it will help scrub out the dickhead image he’s gained in other webcomics I’ve read.

In addition to Fire Emblem there’s Dragon Quest 9, which I hope is as fun as 8.  I actually don’t like the old Dragon Quest games.  8 was the one that turned me around.  I never did get the best ending though.  I would have had to grind levels for another few weeks and I was staring this webcomic…  maybe you heard of it?  Anyway the only problem with 9 is that it has a lot of multiplayer functionality that I will not be able to take advantage of.  I don’t think there’s another gamer with my particular tastes within 100 miles of my location.   I’ll just leave the wi-fi thing on when I’m roaming around and hope to pass within download distance of random other players.  T_T  (It worked with The World Ends With You.)

Third, and decidedly last, on my list is Final Fantasy.  4 Heroes Of Light might be the subtitle, but I can’t recall for sure.  It looks to be a sort of retelling of the original without so much direct port action.  If nothing else the games shares my obsession with putting girls in hats.  I’ve cooled somewhat to the Final Fantasy series.  I loved 12, but 13 doesn’t look fun to me at all.  Of course I wasn’t thrilled by 10 either and I eventually came around, so who knows.  The long and the short of it is that I won’t be able to play it for years, so there’s not a lot of point in speculating.  As long as they don’t turn away from handhelds Squenix and I will still have a tryst from time to time.

First reply to your fist!!!

First reply two and a half years late!

First reply a year after the previous one which was two and a half years late.

First reply to your reply five years after the first comment chain which you replyed to.

wow he got to be the luckiest guy alive

He’s had a hard time up till now. He was due.

So will it be like kill bill kind of training, [insert funny joke about training so hard till some wood breaks]?

Or will it be like Pokemon level grinding training?…20 comics later, Thomas is now level 99!!!!

I’m not sure, but I’m predisposed to go with Pokemon.

Kick, Punch, it’s all in the mind!

If you listen to me, I’m sure you’ll find
The things I teach, ya is sure to beat ya
Never the less you get a lesson from teacha!

Will there be a training montage… With cheesy 80s music?

You’re the best AROUND! Nothin’s gonna evah keep ya down!

It’s gonna be typical Rocky like endurance training I think.
She’s gonna train him until every inch of his body hurts =3

That’s a good kind of hurt…

For RPGs… I highly recommend the Gold Sun games for the Gameboy Advance. Older, I know, but amazing story telling and a unique twist to JRPG turnstyle combat. Also, if you have a console, namely a 360, Lost Odessey is AMAZING. I don’t even like JRPGs and I love that game. One of very few I have ever found that REALLY makes you think on a deeper level. Jade Empire was an older Bioware game that came out for the XBox Original that not many people seem to have played. It was really well done too. Actually, I still play that game. It’s completely unique to just about every game I’ve ever played. And I’ve played quite a few…

You know I’m one of the few people that hated Golden Sun. I never made it further than a port town I think. I absolutely failed to engage me. To this day I’m not sure why it didn’t click.

I’ve always though I might go back and play Jade Empire, but it’s hard to give time to a console RPG. It’s easier to play something I can take with me anywhere. It’s the reason I have a stack of incomplete RPGs laying around… T^T

Unfortunately I don’t have a 360. If I did I’d want to play Fable 2 first off though. Even though it’s more action than RPG.

Golden Sun was a morass of text, But Thou Must “choice” plot railroading and honestly not that well implemented gameplay ideas that pretty much sabotages itself constantly. Plus the “Sequel” was a glorified expansion pack where failing to progress in just the right OCD way in the first game would completely screw you over, assuming you didn’t just skip the first one entirely to begin with. Or at least that’s why it didn’t click with me. I probably wouldn’t have even touched the Lost Age had I not bought both games at the same time, and I ended up ditching it anyway after I literally rendered it unwinnable for myself due to a poorly-timed save. The sprites for the djinni were cute, at least.

If you have a decent laptop (I know, not nearly as portable as a DS), you can still play Jade Empire on the road via the PC version – http://en.wikipedia.org/wiki/Jade_Empire

And as a quick addition, I didn’t actually get the X-Box version until after the PS3 had been released, and then only because a roommate gave me his X-Box, and a friend gave me a lot of his XBox games that he wasn’t playing anymore, including Jade Empire SE. I have yet to play as the Spirit Monk from the temple, though.

If I ever see Jade Empire for a couple of buck used someplace I might pick it up. I almost did a few times, but the martial arts theme didn’t manage to win me over. I liked the KOTOR games and it looks similar if a few ways.

Are you kidding? Get Jade Empire for PC. It’s one of the most phenomenal (spelling?) RPGs out there that’s actually an RPG. And it’s only easy if you make it the easiest setting, it’s challenging at normal, and freaking impossible on the hardest setting, if you want a challange. The side quests are great, the mini quests are entertaining, the story is perfect, which isn’t something you see everyday, and all in all the game isn’t really super huge like mass effect or NWN. (get NWN if you haven’t, but i suspect that you’re a connoiseur.). It doesn’t take too long to complete and you get a new game+ mode at the end. It was one of the most captivating games I’ve played since Prototype/Infamous.

and his training will be hard to miss. I heard that she’s gonna take him to the gym to increase his constitution and strength, teach him yoga and meditation for wisdom, and bring him to the library to increase intelligence (rpg reference, in case I wasn’t clear ;) ).

Then they are going to have sex.
And thomas will finish early.
And we will all laugh at your intelligent humor.
..pls?

It’s probably for the best if I just let you imagine that last bit. XD

I take it you left out Charisma because he already has that in spades?
Hmmm… where’d that idiom come from?? To the googlemobile!

Ah, Golden Sun…that brings back some memories. The boss fights threw me for a loop at first. Most of the RPGs I’ve played don’t have bosses that shave off 50-70% of a party member’s hp in a single attack for each boss fight. Then there was the tri-headed dragon…that thing was a league of it’s own that required lots of effort to beat. O_O

….why my comment got added here instead of up by the Golden Sun comment section is beyond me… -_-;

Aww, their ears are red! How cute.