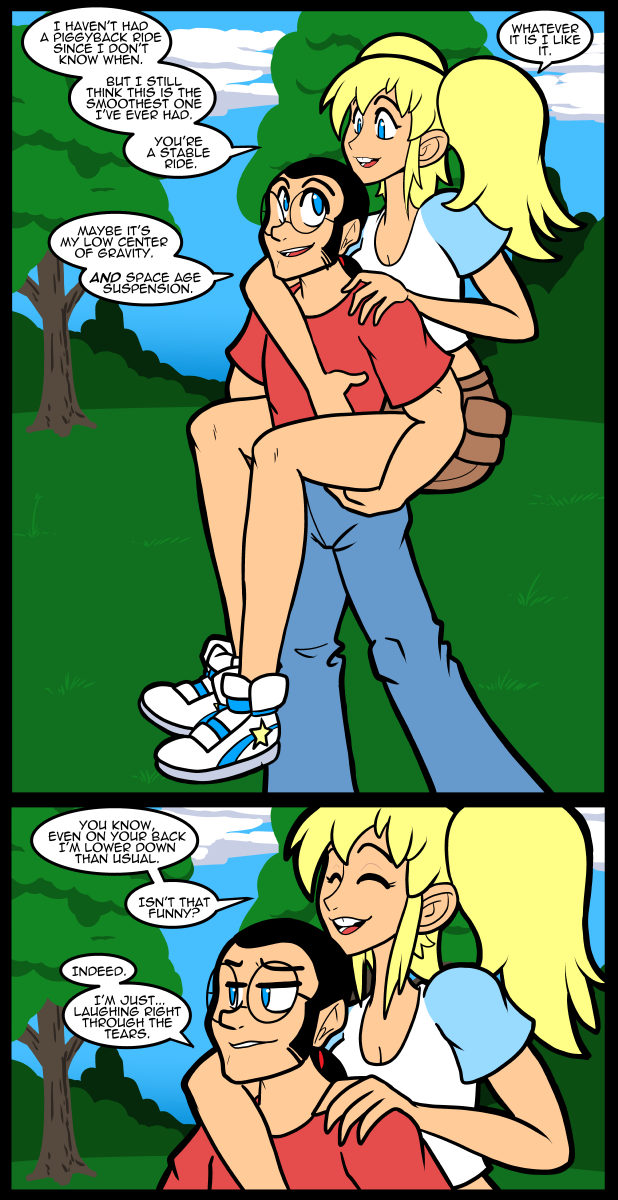 Believe it or not I actually have a height guide for Jess, Nina, and Ed. I had to make it after they had a long scene interacting with each other and was relieved that Ed was normal looking, although short of course, when I was done. In this image his feet are just barely out of the frame. Giving the characters differing heights was one of the most unintentionally difficult things I decided to do when I started this thing. Keeping short and tall people in frame with each other worked out in the end because you can fill the space above the short one with text and pan down a little on the tall one. In everyday like height differences aren’t usually that noticeable unless they are really extreme. At least for me. Plus the women in my family are taller than average so around most people the ones I’m looking at generally even out. I only notice people who are taller than myself usually. They are pretty rare. One of the inspirations for Nina was taller than me, and very striking to look at. It’s not very often I have to look up at a woman so it leaves an impression.

I worked with a guy who was actually a little shorter than Ed. At least I think he was. To even out our heights he had to stand on a chair. Of course he bucked the trend of the napoleon complex by being very secure in himself. In fact he’s one of the most confident, easygoing, and self assured people Ive ever known. I expect it must have been because his dad, who was also very short, had a very forceful personality that made him seem a lot taller, if you know what I mean. So maybe he never saw his height as as much of a deal as other short guys. That said, I know he got shit for it, but he just kind of let it wash over him like it never mattered.

Sends he’s being riden would that make him Mr Ed?

Neigh, he is not hoarse!

Willbur is that you?

I wonder if kids these days even watch shows made before the 80s-90s anymore to even understand these 1950s references.

Do you think Ed will,
“yakkity yak a streak, and waste your time of day”?

As mutch caffeine as he’s on, I’d say it’s a safe bet

This was in response to David browie’s caffeine comment.

tears of joy? I can’t imagine being unhappy in his position

Silly Ed, don’t you dare be short with your lady.

TThat’s true.
Ed should stop being so short.
He should be a stout fellow.

Nina is 6’3″ so you can calculate everything approximately from there.

….I can’t actually recall anyone ever complaining about tall, striking, and assertive from anyone. Although, I’ve heard it can be off-putting from for a few guys?

Either way, judging by Ed’s smug look there I don’t think he falls into that category.

This kind of reminds me of something I saw in a car park where I remember seeing a guy look like giving a girl a piggy back (he was about 6′ tall), her head was over his and he looked a bit pissed, like she was being a pain in the backside.
I thought nothing of it, until I drove past and there were talking to an older couple, she was still in the same position and I was admiring his stamina until I realised that he wasn’t carrying any legs and she was stooping to rest her head on his.

And with this, I’m caught up. Started reading last week, and have nothing left to do. I didn’t realize how old it was until the Steve Irwin joke from 10 or so years ago, I’m glad to see it’s still going!

I’ve often thought of changing that joke to one that wouldn’t be so bound in time.

Sorry Ed, I can’t relate. I’m 6’5″, and most of my family is tall. Not athletic, but in college ended up in the same dorm as a lot of the sports types. Several basketball stars killed my idea of being tall. But really it was my next door roommate, he did shot-put, was build like a linebacker, and was around 6’8″. He didn’t look tall, he looked further away, if that makes sense. I’m not sure, but I like to think he threw the shot-put like a baseball.

Jackie the funny thing about a Napoleon Complex? Napoleon was taller than average for the day at about 5 foot 7 inches vs the average at 5 foot 5 inches. He would have been seen as tall by most at the time

The idea that he was short came from political cartoons of the day, which just goes to show why you shouldn’t fuck with artists.

This really amuses me. Ever since I have attained my adult height of 5’8″, people have always thought of me as taller. It happens almost daily that someone will remark on how they thought I was taller. I guess I have a tall attitude or something.

My dad is a foot or so shorter than me, but people remember him as taller. His presence is imposing.

Years ago, a guy about my own age came to work at the nuke plant as a guard. he was five-foot-two-and-a-quarter. If anyone asked him his height, he’d flash the coin and say, “Remember the quarter!” Dude exuded confidence. He had a long, bushy blonde beard and used to say, “You know, I’m really pissed Tolkien didn’t put me in the books!” Hell, they should have put him in the movies!

My granddad wasn’t very tall, although at 5’7″, he was about average for his times. I don’t know much about my grandmothers, they both died when my parents were 5. My step-grandmother, however, was 6’0″. She was also considerably younger; she was one of his oldest daughter’s schoolmates. They must have been a sight to see together in Akron back in the 1940s.

About fifteen years ago, she came out to visit for the holidays and stayed at my sister’s house. When I went to call, she answered the door, and although I knew there was a step up from the porch, she seemed to tower over me, and I’m also 6′. The lady just had a presence!

Poor Ed. Not the sort of riding he was hoping for…

people generally see me as small, until i stop slouching… also, I am noticeably unnoticeable, for some reason or other.