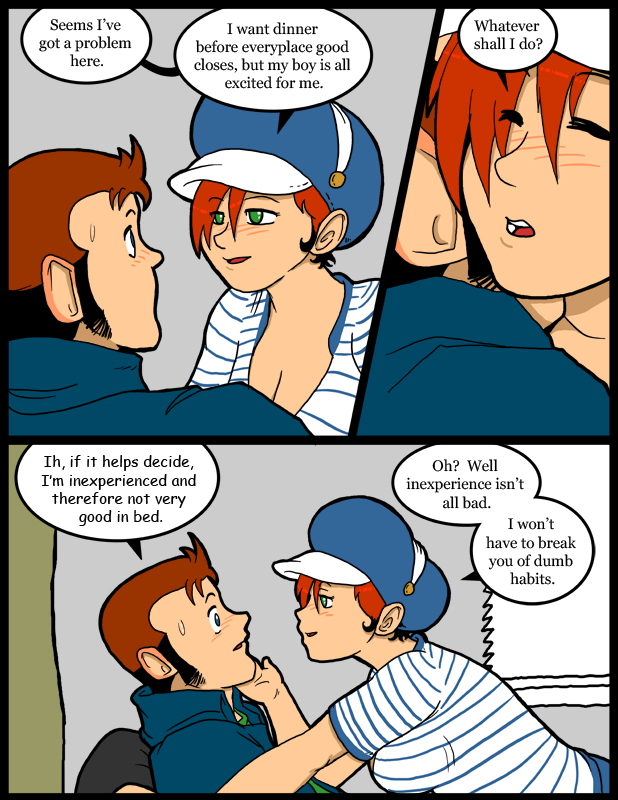 I am only now getting to a point where I have opportunities to talk to other artists about the craft of sequential art.  It’s unique for me because I’ve basically been creating in a vacuum for all these years.  I think the main problem is that everyone is always busy and our schedules rarely sync.  Recently though I’ve had a chance to have many long conversations with someone who supported me from the very beginning and I think the comic is better for it.

I have no use for unsolicited critique.  If you just start telling me what I’m doing wrong I will dig in my heels and many times do it even harder just to spite you.  Only the most arrogant artists are unaware of their failings.  In fact most artists are keenly aware of millions of flaws that the viewer usually doesn’t notice.  That said, I do have a little circle of trusted friends I take my stuff to when I want to be told what I’m missing, or if I’m just imagining problems.  Temepest Lavalle  is often first on my list when I need to be told what’s what.

I bring this up as an excuse to thank her for her help and to make you guys aware of her comic The Girl Next Door .  It’s listed in my links but it’s hard to tell what’s what in there.  TGND is very similar to Between Failures, so there’s a good chance you regulars will enjoy it.  Which is not to say you won’t enjoy other comics I link to, it’s just that they are pretty wide ranging because I’m friends with a diverse crowd.  What I’m trying to say is that TGND is probably the most like Between Failures, which you already like, so if you need more stuff to read that’s a particularly good choice.

Wow, this is something I would of never expected to hear from Carol, ever, even after seeing them get together, I still would never of expected it. Nice job completely proving me wrong! (in a good way of course!) Also on a side note, God Dammit you lucky bastard.

You know…i have a premonition…

Does your premonition consist of something along the lines of “in just a moment she will abruptly switch gears, deliberately leaving him cold just to see the look on his face”?

If so, right there with ya.

Well, my premonition was more of them nearly about to get it on; then either:
A) Thomas gets a call about something important .
B) Someone bursts into the room for some reason and they have to explain.
C) The freaky gothic/snape guy calls Carol and the mood is shattered.

Where were you when i was writing this?! I could have used these ideas…

Having read the following strips, I think what you wrote is better ^^

You gonna get loved tenderly.

If he’s lucky, he might even get some bruises.

Even though she said it was okay why did he tell her he was inexperienced? That seemed like he was pushing more for dinner. Is he just super nervous or something?

I believe his point was that, if she was worried about getting to the restaurant in time, he probably wouldn’t last very long.

It’s a mix of things, but he definitely is nervous.

I love Carol’s comment in the last panel. Utterly priceless!

It’s important to train them early on so you get what you want over time. XD

Is no worry from me JT. Can’t see a good reason for you to obsess over what we won’t notice… I say, as maybe I shouldn’t, given that I like everything so far…

Well i appreciate your support in any case. ^___^

Just wanted to say that. BECAUSE.

I agree, artists, unless unusually extremely arrogant pricks, notice every single missed brush stroke, every color error, everything. I would say even my best work is imperfect, and it would be true. But sometimes it’s the little things, even the errors that make it unique.

I have to say, that if anyone ever asks me what a good webcomic to read is, I list this one right under Dominic Deegan. In a side note I hope this html link works properly. Anyway, It isn’t the artwork that caught my eye, to be quite honest, it’s the writing, which makes me wonder if you have any novels published. The art isn’t exactly “basic”, but more simplistic, to allow for the flow of dialogue that wraps around the reader, and pulls us in quicker than a quagmire, but with less sand in our pants.

In any case, RIDE IT CAROL!

That’s a weird compliment. I’ve known you long enough to know you meant well though. XD

I think it’s a win-win

ok i see what you are doing, i have got my money ready to pay for the next comic :)

Wait, what? If you’re willing to pay up front for this don’t let me stop you. I’m all about the Benjamins, as the young people say.

i was making a joke from what i said a few days ago where i said it might turn x-rated, you said you would charge for it, well…. i got my money ready. lol :)

XD I don’t think I’ll dip my toes in those waters just yet. Not here anyway. Hopefully you’ll be happy with just some free web MA content.

I predict an interrupt.

By the way TGND is pretty darn good.

I’m glad you liked it. Did you say hi from me?

I did. I dropped a comment where I got the link from and agreed that it was a impressively written (and drawn) story.

I also found irony the way both of your strips ended…

“I have no use for unsolicited critique. If you just start telling me what I’m doing wrong I will dig in my heels and many times do it even harder just to spite you.”

Please don’t. If you don’t want to accept somebody’s unsolicited criticism, *please* ignore it. Don’t let it affect you any more than you can help.

Don’t let them influence you unless you want to. If somebody criticised you and said you were boring, you wouldn’t try to be boring to spite them, would you?

I wouldn’t have to be boring to spite them. I can do that just acting regular like. XD

Am I the only person who’s sick of these lovey-dovey, nerdy couples in web comics? It’s inconceivable in reality that such people would exist with such personalities while being attractive.

I disagree. I’ve met tons of hot nerds in my life. I recommend taking an interest in shows with more drama and romance to attract the female though. Or World Of Warcraft… Ladies love WoW

Clearly I need to live where you are.

Actually you’d be better off living where I did 5 years ago… Unless you want to date a cow. I don’t mean that euphemistically. I literally mean there are only cows out here.

Hey, no fair, I’m supposed to get the offers of hot stat sheet lovin’. T_T

Hrm… I’m actually surprised that Thomas mentioned that. To be fair, it seems like he would have quite a bit of experience in the “hot steamy sex” category. Maybe I’m just overplaying his relative level of awe-… No, I will stop there. There cannot be such a thing as too little awesome with this comic!

He’s not a ladies man by any means. It’s not been played up in the comic yet though.

Not so good with criticism myself… I draw often enough to know what I suck at, but not nearly enough to improve much. Anything negative is more discouraging than anything, like an out-of-shape person getting scoffed at on the rare trip to the gym.

Hmmm, I wonder if she wouldn’t mind some home cooking. Then again, that’s rare enough in my house I can understand her conflict. Mmm, food or sex, food or sex…

Also, it can be surprising who has an advantage in bed. Some people… you know, are willing to try harder. Is Thomas a virgin in any sense, I wonder.

I considered having Thomas be a virgin, but it’s a plot that’s been done to death. Inexperience still works with the joke and doesn’t seem like a set up for a sitcom plot. Some people just don’t get any very often and Thomas is one of those people, but he knows enough to admit a shortcoming when it matters. XD

Carol looks so manga in that 2nd panel. :P

I still have that philosophy to this day