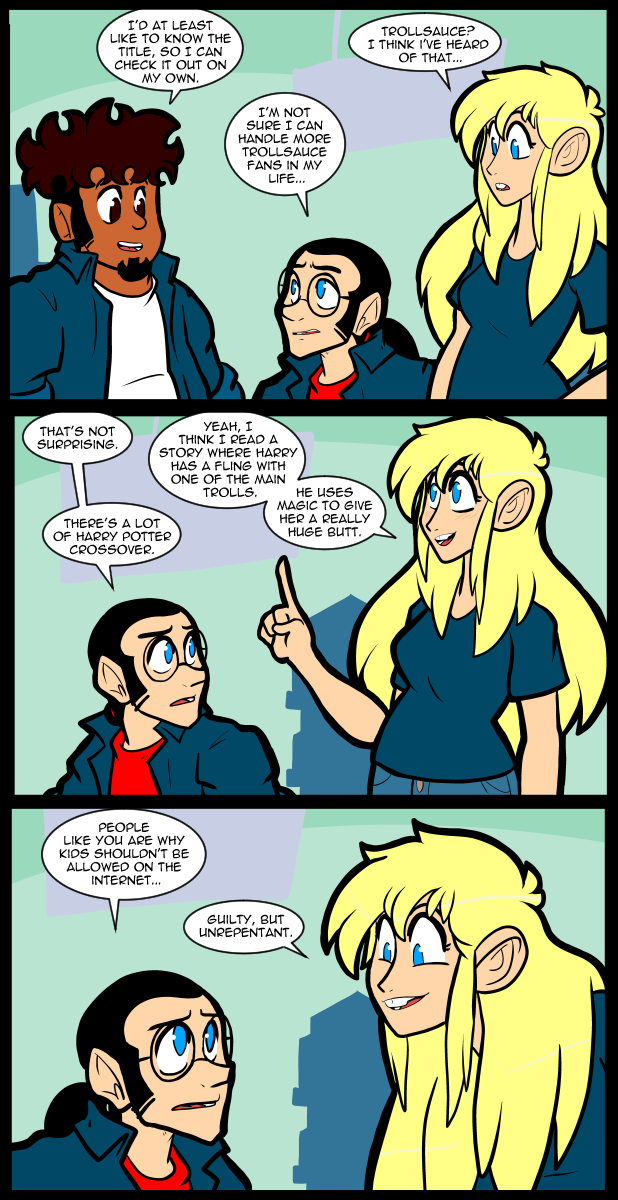 I always try to think of the worst names for fictional replacements in the comic world. Trollsauce sounds awful. I kind of wanted something a little less on the nose, but you can’t spend all your time thinking of names. Sometimes you just have to pull the trigger.

Also Nina originally said ass in the first draft, but I changed it to butt because she doesn’t curse as much as everyone else & she’s weirdly innocent in some ways, while also not being. I almost used rump, or buns, but those both made me cringe, which was a step too far. Perhaps I care too much about such trivial things, but I do.

Nah trollsauce is perfect, it’s a perfect descriptor, and tells you exactly what it’s referencing.

Yea even wo context i knew he was talking about homestuck

Huh i was thinking Oglaf or the Slimy Thief or Blooming Fairies.

Nothing in Homestuck was particularly lewd… But them maybe my 2 decades of wallowing in the decadence of the internet has completely eroded my sensibilities.

I don’t even read “Homestuck” and never did and I still got that reference. I don’t know if that’s a good or a bad thing.

I tried reading homestuck and got bored before I got to a hundred episodes. Does it get better?

If you can’t get into it after that you never will. Some content isn’t for everyone.

The worst names for fictional replacements?
I see. please, let me introduce one of my worst names:

Eww, you mean to say he actually walks with those gangly things sticking off our torsos?

WE PUT OUR FAITH IN BLAST HARDCHEESE

I’ve actually somehow managed to read all of the base material for “trollsauce” and stay sane, it’s actually fairly well written…gotta say tho [S]Cascade is still one of the best parts of it(if your curious copy/paste that title to a certain video viewing site) unfortunately I’ve not been able to keep track of trollsauce^2 as well as I did the original…

Wait, this lewd comic is supposed to be “Homestuck”?

I never got super far into that comic, but I don’t remember anything about trolls or bodily fluids, just a bunch of junior high kids and supernatural stuff.

Oh…. INTERNET trolls. I was thinking of the actual monsters.

Yes and no. There are some internet trolls, but after reading for a long time the author reveals that those are aliens who call their species “troll.” Then there’re a lot of chapters focused on them.

Right, I gleaned as much earlier from an internet search.

Still, it’s obvious that the aliens’ name has more to do with internet trolls than the varieties that live under bridges or have gems in their belly buttons.

If you want a lewd comic which is often full of real trolls, Oglaf is always ready!

As someone who used to be a huge fan of “Trollsauce,” I feel similarly. It used to be one of my favorite webcomics, but after the slow decline of Act 6 and losing more and more interest the more way it decided to continue the story after the “end,” I haven’t even started “Trollsauce”^2 and don’t know if I ever will. [S]Cascade truly was the high point of the series.

Next time I’m at a bar, I’m ordering wings with the trollsauce.

I’ve had it. It starts mild but it then burns like crazy. Turns out it’s made with Carolina reaper peppers.

I’ll be sure to have the fire department on standby.

I think it’s a sign of an excellent author when they write their characters the way that they’d behave, rather than how the writer would have them speak. Kudos.

So it’s a parody of a real comic?

I don’t think I want to know what the real one is called, lest I be tempted to investigate.

Its been mentioned in the comics and you REALLY don’t

@Jackie_Re_”Perhaps I care too much about such trivial things, but I do.”:
=====No apologies, please, just because you have a commitment to quality. That kind of attention to detail is what separates the ‘hack’ from the ‘pro’, & I for one want to be counted among those who say “Kudos, Good Sir”.

Nina says, ‘butt’ and then giggles a little, no doubt about it. Then Evrina says the exact same thing and it sounds like a barmaid on a wharf.

Caring about the trivial things is what makes something great. It isn’t a step too far, it means that you care about the characters and world you’ve created and that’s what makes us care.

Agreed. What Nina would say, in a comfortable work environment, v. in a meeting with Mike’s boss, v. off work with (say) Jess, is part of characterization.

@[J.]:
Exactly So!!!
Why should the reader give-a-hoot about the [story/characters], if the Author can’t be bothered?
While overthinking the details can lead to “Analysis Paralysis”, the opposite extreme risks the sort of “Reader Apathy” that might cause loss of readership. A reasonable balance between the 2 extremes is an ongoing, organic process.

I would have used “badonk”.

Hahahahahaha ah the internet. Its weird its freaky. And so is fanfiction. But the trollsauce and the Harry and a troll thing is a bit too weird for me……..