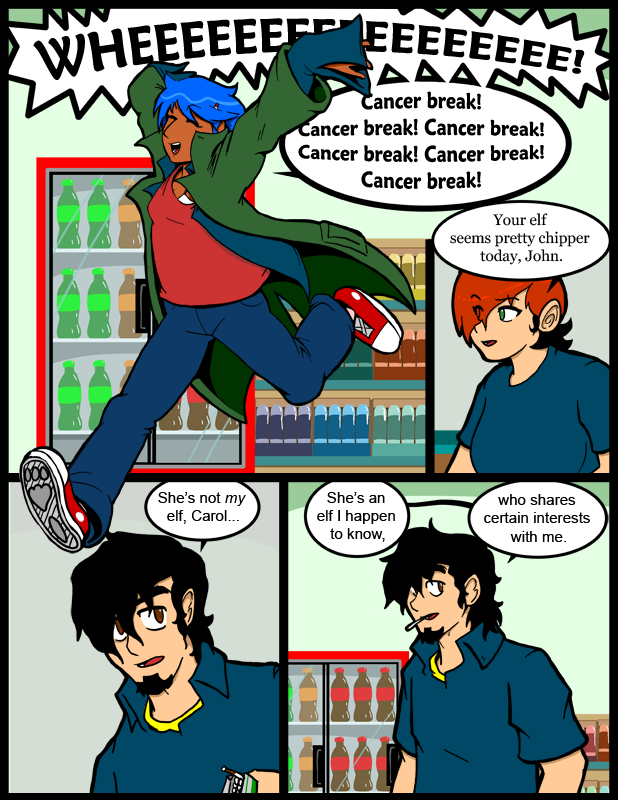 I guess my dream cycle isn’t as over as I thought.  Had a dream where a tornado had destroyed most of the town I used to live in.  Strangely no one was hurt, but the land was nearly wiped clean.  I was visiting after the fact and all the places where there were buildings before had wooden frames instead.  In the context of the dream my parents still lived there and apparently and the family cat was lost.  I think I woke up as he trotted into the incomplete house.

I flew over the town in a helicopter at one point, which is something I would NEVER do in real life.  I’m super ultra acrophobic.

Those shoes. I want them.

And I know a lot of people who are happy about Cancer breaks. Happy like Brooksie

those shoes would leave awesome footprints, want them XD

Yeah, where to get those shoes? They’re even better than the ones that leave Japanese kanji saying “Toto, I don’t think we’re in Kansas anymore.”

Frith-Rah! Protect us from U Hrair! X3

Having a touch of acrophobia myself, a helicopter or small plane is no big deal. You’re buckled into a seat, and once you get high enough, the cars all look like the toys from Mister Roger’s Neighborhood’s intro.

Brooksie makes me wish I smoked. But I have a hacking cough as is.

You have a hacking cough and don’t smoke? That is the definition of ‘teh suck.’ [sic]

those sneakers are pimp. (yes that was intentional)

I would love to see that first panel on a t-shirt. i would wear it every time i smoked.it was be the shit

Seeing anyone take as much joy in life as Brooksie obviously does makes me smile. Bravo for the innocents.

See this? This is why I think John and Brookie are an awesome couple