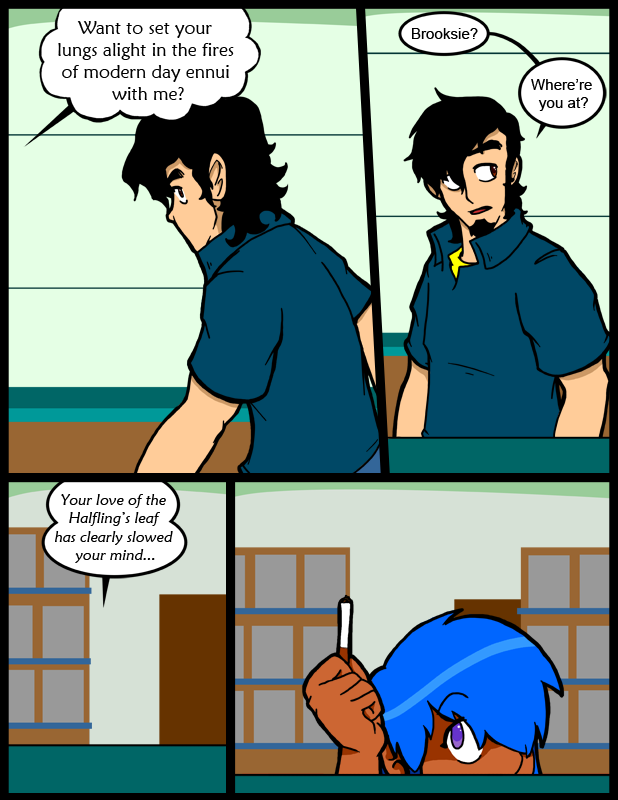 I’m not really sure how many people I actually know still check the comic every update, but I’ll be in Garden on Wednesday the 24th.  Probably will end up at the Gamestop at around 2, your time, and then we’ll have dinner at the usual place around 5-6 ish.  Let me know if you’re going to be around.

I’ve been playing through the Gamecube Fire Emblem.  At first it was a few battles a night, but as they got more complex it’s become more like one, or less than one, a night if I screw up.  I’d be done with it already, but I restarted it about halfway through because I decided I wanted to focus on other characters.  Of course, no matter what you do you can’t see every support conversation without playing a bunch of times.  Unless I’ve done something wrong at least…  I’ve missed out on Ike and Elincia’s ones though because I didn’t think to save any conversation slots for them.  X<  I’m hoping you can save them up on subsequent playthroughs…  I understand if you play the hard mode the ending is different.  These reports are unconfirmed.  I’d like to see whatever ending is the “real” one.

You can transfer information from the Gamecube version to the Wii game.  I didn’t know this before, but now I’m obsessed  with having the best save data ever on my Wii game will be extra cool.  The downside to this obsession is that it’s making my replay things I wouldn’t necessarily.  I mean I already play halfway through and started over.  This can’t end well…

That said, the story is awesome.

I’m wondering how many people are going to understand the connection between the title and what happens on the page.   It reminds me of a guy I worked for once who was really interested in LOTR and knew a lot more about Radagast the Brown that I thought was necessary.

This is because Radagast the Brown is a freaking awesome Wizard.

You know, I always forget if you’re east or west coast. There is a convention called Aki-Con this November in Bellevue WA, would you attend? What if I bought you a 3 day pass? Anything just to meet THE man in person!

I’m not even sure how I found this, but I’ve watched it every day since.

Aw, I love the last panel! Brooksie’s face in that panel is great ^_^ Can’t wait to see more of John as well :)

I just got lectured on the wizards and their colors last weekend…I’d always assumed there was one wizard for every color of the rainbow. Apparently I was wrong…and was told so, and how, in great detail, at much length.

I understood, and I also now want a cigarette, thanks for destroying my health! but let’s face it I would have had one anyways…

@ Rook – I agree, but one should never give up all your knowledge of wizards in a sitting unless asked so to do.

@ Jon – I’m middle actually. And I can’t possibly afford to travel to a convention that is close to me, let alone one that’s far away.

Ah Brooksie, I wish real people who quote movies all the time were this adorbale. And I could really go for some of the halfing’s leaf right now.

@Crave you just wait, I’ll win the lotto (aka unemployment) and I’ll g– wait, your in the middle? like where? OK? TX? KS? Shit, you were probably living driving distance from me and I never realized it! GOD DAMMIT! I COULD HAVE SOOO STALKED YOU!

I try to check the comic as much as I can, it’s one of my top 5 favorites

I also always assumed the whole colors thing about wizards was just a sort of silly nickname with no real meaning. I always imagined Radagast either wore a lot of earth tones, or had really poor hygiene.

I’ve been following you ever since I found you on DrunkDuck, then came to this site for the latest release. Also, if I didn’t have plans for tomorrow, I’d shoot you off an e-mail to meet you in Garden City.

I have also felt the pain of having to start over in a game even after reaching a decent story point… it sucks, but sometimes must be done. I almost always try to have my first playthrough be casual, but I don’t go by the moniker of RPGaholic in certain forums for nothing. Sometimes you just need to powerlevel to get stuff done.

I’m here at the time and place you specified. where are you?

At the time the earlier posts on this page were made , I was still smoking. As of this date, I am over a year clean. Am I still an object of disdain and derision?
I don’t normally rise to the comments of ignorant trolls, however your blanket intolerance and lack of comprehension suggest you don’t belong here.
Perhaps if you had bothered with reading Tolkeins notes, you would know more about the leaf in question and it’s lack of relation to both tobacco and marijuana.

Just before you point out this flaw, yes, I am aware that , in this comic Jo and co are tobacco smokers and are, themselves, miss-referencing the particular herb being smoked.