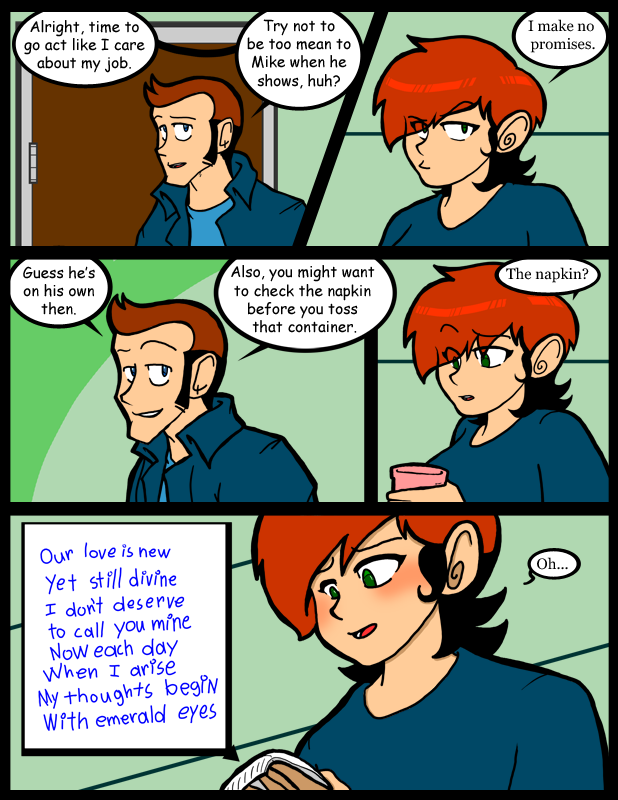 Alright, before I get to the post, I’d like to call your attention to a new poster in the shop for those of you who are fans of Miss Brooks.  I kept getting requests for it, and my friend Rantark finally convinced me to do it.  I’m going to try and get a couple more posters in the shop pretty shortly.  Hopefully tonight if the files don’t struggle with me the way the first one did.  I expect that it will be a little while before the new stuff actually shows up in the store.

Edit: Is anyone interested in signed stuff?  C-Ham suggested it.  I’ll find a way to do it if that’s what people want.

I was never a big fan of Buffy The Vampire Slayer. I watched some as the series drew to a close. My friend Justin was, and probably is still, a fan of the show. The title is a reference to one of the few things I remember about it. The vampire Spike was once called William “The Bloody” because his poetry was bloody awful. Hence the page title.

Incedentally, when James Marsters took on the role of Captain John Hart on Torchwood I was happy to see him again. I am a fan of Torchwood, and the episodes he was in were some of the best from that season.

You should offer to autograph the posters. I have a print signed by Scott Kurtz and I love it.

Oh wow.
Thats… thats so corny! XD Why are we girls such suckers for those sorts of things? :P

Corn is delicious and nutritious!

Signed. Heh, just makes my signed copy of the original sketch of “I win”. a step closer to being worth bank. I may be interested in getting a signed wall poster too. Can’t have too much Between Failures swag. I’m a sucker for swag.

Aww, that was great. Quite touching. It makes me smile.

I’m pretty sure swap means “stuff we all get” so where is my singed original sketch?

Hot Damn! Thomas sure knows how to start off strong! gotta write that one down….

I’m also pretty sure that I can’t type worth crap.

Swap? what the hell is swap?

Swap is swag if it gets moist.

Wait… so this is only the second day?! Anywho, this comic is awesome i started ready yesterday and i was hooked. I’d write a haiku but i think that would just be creepy >_>

Fact: Men are jerks. It’s how we define our pecking order in the wolf pack. The biggest ass is usually the leader.
Fact: Women don’t like jerks, and most of them wish to change the man they’re with.
Fact: Women who feel like a man is changing for them will go weak-kneed and starry-eyed.
Conclusion: Men – be jerks on the outside but develop a rich center of non-bastardry. That way, when you meet a girl who is worth it, you can show that to her and she’ll melt like a fudge bar in Sacramento heat.

Women like a fixer-upper.
Once they’ve actually succeeded at fixing them up though, they lose interest.
That is the nature of the beast.

Some women actually go after what they want instead of a fixer upper. Can’t say we’re all the same animal just because you have bad experiences.

He might just be reflecting on observation of other relationships, rather than his own, such that your conclusion- viz. he’s had “bad experiences” is quite presumptuous… but (seemingly) being of the distaff side it makes sense you’d take that position ;)

I love her expression in the second panel :D
such a sweet poem.. hee

Dammit. I just spent hours throughout yesterday and today at work going from the beginning to end in this….and now I have to wait for new comics???

I enjoy this webcomic immensely.

aws, teh mushies is unbearable

Awwwwwwww <3 Nothing like sweet, cheesy, secret poetry to start your day off right :3. Thomas makes me very happy face.

You have much to teach us Thomas

Bows before the master. You are….the last dragon and I bow to you and your skills at making ladies smile with poetry, no matter how napkiny or sappy.

Swag is indeed available to everyone, and he’s feeling things out to see how many people would be interested in getting signed things. Thus while the signed sketch I have may currently be a rarity, it may in the future be that you would find yourself the owner of a signed poster. Maybe even a sketch if you’re lucky. Trust me. I was VERY lucky. And the poster on my wall of Carol is larger than she would be in real life. It was discussed at some length when Crave saw it.

BTW, Crave, can the internet fairy wave her magic wand and create a forum? Forum discussion of various topics Between Failures related would be teh awesome. Tell the magic internet fairy I’ll owe her. Lots of hugs or something.

Well, since the people have been asking for it I better figure out how to get a forum going… The Web Farie is out of town at the moment, so I’m holding the site together with my willpower, and bits of colorful string.

I’ll add my own willpower to the mix if it helps. Well actually my willpower is currently attempting to summon the internet fairy to make a forum. But hey, I’ll redirect some of that to you to use as you see fit.

Although the Magic Web Fairie is out of town, she is trying to figure out the forum and other stuffs…….soooooon precious peoples, soon……..
Hugs & Kisses,
Magic Web Fairie

Thomas is one suave man!

Dammit… I wish my retail job could be this interesting. And life changing.

Anyway, started reading a while ago, and I love it. Keep up the awesome.

Also, signed stuff is good too.

I suspect the reason that women are such suckers for stuff like that is that the guy demonstrates a confidence and a willingness to expose himself to do such a thing. Doesn’t hurt that it shows he’s put some thought into how to impress her, either. :D

To the above, too true. Ah but once again, being paranoid probably won’t help the guy who will try to impress me with stupid poetry. Nice sentiment I guess, though. He doesn’t have great handwriting, huh?

Look, I love Spike so much I want to have James Marster’s babies, even though I’m a dude. But his poetry really was bloody awful.

As a fella who has written a number of poems for the ladies, and found it a rather effective tactic, no matter how cheezy it is, I must commend this strip. That poem is actually really good. It says it all in very few words. Kudos!

Dude… the cheese and corn are having a party and it got a bit out of hand.

This page really makes me want to give that dude a wedgie.

oh yea hes got her now

You’re even getting angles down well. That lower angle of Carol’s great!

Thomas can’t be called “The Bloody”, because that poem Effing ROCKED! Spike’s… were just f*cking dreadful.

The affected geek-speak I can believe. The affected slacker-hero, even, but not that he’d dot his i’s with circles.

Dah-um. Dude has skillz. Was really not expecting that at all. He’s smoothe.