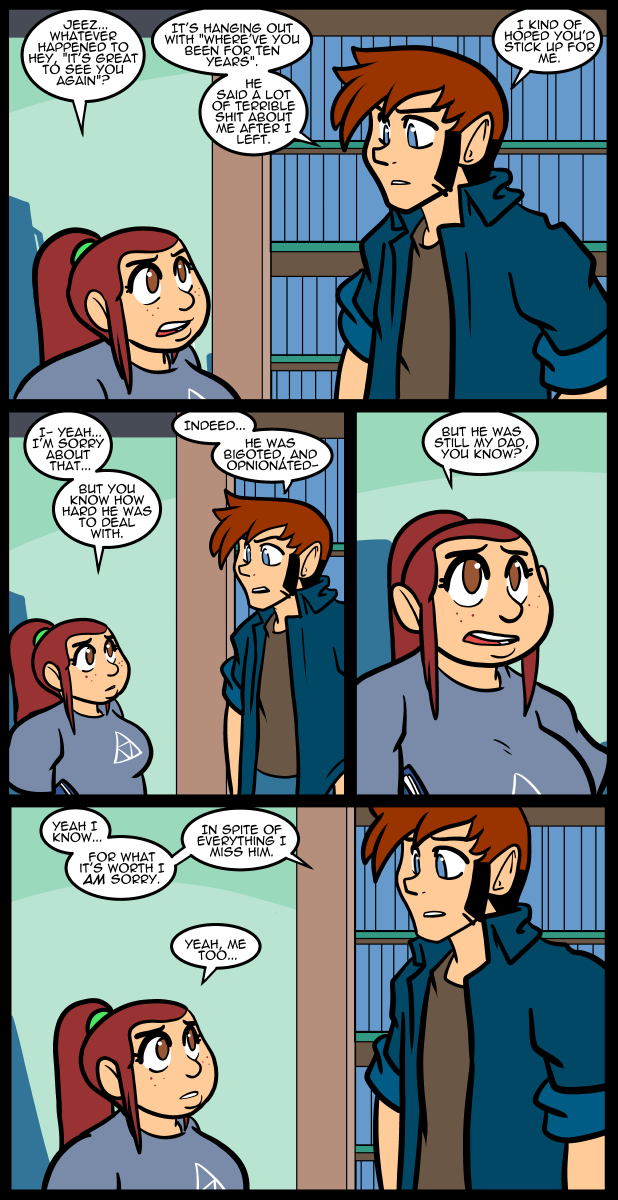 All of the characters have all this backstory I wrote for them that may never come up. Like the stuff with these two was worked out but I hadn’t decided for sure it I was ever going to nail it down and then I decided to introduce Patricia and it all kind of needed to be dealt with. Which is fine. That’s the point of writing stuff you may never need, so you know the motivations of your cast. Nina’s relationship with her brother, Carol’s with her sisters, Ed and his father, etc. etc. They are all in the chamber if ever I want to use them. It would be sad, in a way if I never get a chance to. No one knows what tomorrow will bring. Drawing a story is so much more time consuming that just telling one and telling one can be pretty time consuming too. Minutes turn to hours and you haven’t gotten nearly as far as you thought you could. I shouldn’t be worried about any of that stuff really. I still have initial plot points to work out, but it all needs to be done in its own time and strung together just so.

Sometimes when you’re out driving at night you can see into a house and when I do that I often get this overwhelming sensation of retracing everything that led to the room you can see getting put together the way it is. The tv was set there because of some series of choices, and the nick nacks all have backstories and the pictures and the shelves and everything. Those people have multitudinous stories behind them and I’ll never know what they are. They live, love, lose, win every moment of every day just like I do and that little glimpse into their world, the little square frame, brings my attention to it in a way that doesn’t happen any other time. Then I have to stop myself from thinking about it because my brain starts to swim. Layers and layers of stories everywhere all the time that we shut out because the one we are living is almost too much most of the time.

Roger Zelazny would do the same thing, going so far as to write entire stories for characters that were usually never published. You’re in good company. And your insight and empathy in terms of seeing a whole life from a short glimpse is the same quality that makes your creation worth following for 1700+ pages. Bravo, sir.

Yea! Roger, we miss him, I hope he is a king in his Amber, resting peacefully on the throne– instead of contentiously, like Corwin. I miss his way of describing things and places.

Roger = Random, and that’s all I have to say about that.

Eggs = Benedict? Unless we are going to Bleys new puns. Sorry, just Dworking around, and he’s not Random at all, … I don’t think he is, although he might think he is. Sorry for courting chaos. I’ll stop now.

*Throws peanuts at you*
Damnit, now I want to read the Amber books again

There are a lot worse things to do on a rainy day (evening), than sit down with any book by Roger. ‘Today We Choose’ ‘A Rose For’ ‘Jack of Shadows’. He says he is ‘Lord Of Light’ wearing the ‘Mask of Loki’. But he’s using the ‘Roadmarks’ to open ‘Doorways In The Sand’ for ‘Creatures of light’. We will send him down ‘Damnation Alley’ just before ‘The Last Exit’ to ‘Italbar’
Why?
Because ‘My name is’ ‘Madwand’.

There are ancient Hindu scriptures that tell advancing ascetics not to get caught up in analyzing every action, because every action can be broken down into smaller and smaller parts that can be analyzed, and those parts can be analyzed to see if you are doing life correctly, and it becomes like Zeno’s paradox; where you can never arrive at a place because to get to the store you must get halfway there, and to finish getting there you must cross half of the remaining distance, and half of THAT remaining distance, and Zeno figured that you’d never finish arriving, or something Ike that.
But the advice in the ancient scriptures was to just Be, and Do. And let the joy in your heart steer you in a correct direction, because the intellect can’t deal with dissecting the choices. Just do it, to paraphrase Nike. (Who was the goddess of war, IIRC)
I can SO relate to your looking into a room and there are stories everywhere, and most are unknowable, but for the ones We are living… And are writing.
… Or in my case, Reading. Your web comic I mean. And I love it.

Goddess of Victory, as it happens.

Thanks, you just did it, that’s better now.

Sonder: n. the realization that each random passerby is living a life as vivid and complex as your own—populated with their own ambitions, friends, routines, worries and inherited craziness—an epic story that continues invisibly around you like an anthill sprawling deep underground, with elaborate passageways to thousands of other lives that you’ll never know existed, in which you might appear only once, as an extra sipping coffee in the background, as a blur of traffic passing on the highway, as a lighted window at dusk.

Wait… Nina has a brother?

Yeah, didn’t you know?
Geez, *everybody knows that!

*By “everybody,” I mean “practically no one.”

She only mentioned him once that I can remember.

Missing friends:
This is probably too much info:
A friend of my parents passed on a few years ago.
He was kind of, TOO authoritative, + whenever I saw him, he usually ended up rubbing someone the wrong way.
He was a strict parent, + had a reputation for browbeating young people/people. under 30, for NOT doing what he was doing, such as- being a financial success, + being a big success in his industry.
If you’re wondering…, many times,…he bugged me a lot. Ugh.
Looking back on it, tho, he wasn’t [really] a nasty guy,… other than him doing some fart-cushion types of practical jokes…he wasn’t an EVIL guy…..I think he just had a real bummer of a set of social skills. That’s my view on that, anyway.
Sometimes, when people talk about him,…I really miss him.
That’s my, Ms. Jo type of thought, for the day.

For some reason, I get like that walking down city streets. There’ll be storefronts with apartments over them and I’ll look up at a window and wonder, “Who lives there? What is their life like? What’s it like to live on this busy street where something’s always happening?”

Or I’ll do like you said seeing a light on in a window while driving at night, and wonder the same things…

You are so right, getting caught up in how details came to be is wonderful rabbit to fall through. Some years back I subscribed to the Smithsonian’s monthly magazine. Every month they would pick one item out of their humungous collection and write a whole article on the what, how and cultural why of that object. Great stuff.

If nothing else keep all those notes and background stories written down somewhere.
At some point in the future a Biographer is either going to have a field day or an aneurysm when they sort through and collate everything into a hefty volume similar to the Silmarillion.

More and more, better and better. Your comments on storyline development assure an interesting read for the foreseeable future. Thanks!

Hi Jackie, I like how your comic has girl-characters in it whose figures look different from a 1990s, barbie doll’s figure.
I also like it, that you write these girls with fun personalities. Great job! :)

His character development and depictions are one of the main reasons I love this comic so much. I feel like any of them could be a real person, like I know them. None of them are flat or one dimensional, it’s really amazing

You’re right.
Jackie does very well, in writing for his characters.