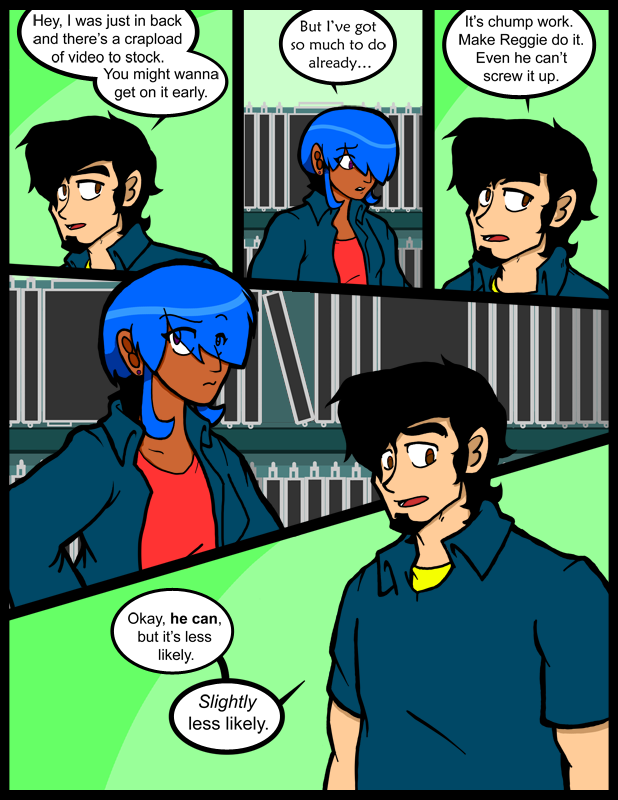 A note about dream analysis:

First of all I think books of dream symbolism are mostly useless.  Different things mean different things to different people.  A friend of mine is afraid of owls, yet I think owls are neat.  An owl appearing in either of our dreams are going to mean something different, if it “means” anything at all.  In my case an owl is probably just an owl.  For him it may be a harbinger of doom.  The thing about interpreting dreams is that you kind of need to know the subject, as their dreams are a reflection of their unique subconscious.  Dream analysis for someone you know nothing about is pretty much the same thing as giving a cold reading.  It’s a parlor trick.  What you end up doing is getting them to tell you what they think their dream means.  That’s not to say that what they find out can’t help them in some way, but it’s not proof of a magic power.

That being said, here’s another one of mine.  It was really entertaining.

So it starts out with this girl trapped in some kind of torture dungeon kind of thing.  She’s being held captive by two villains.  One looks like Johnny Depp (From Hell style) and one looks like Helena Bonham Carter (Harry Potter style).  She escapes, before they can kill her, by swimming to the Statue Of Liberty.  That’s not uncommon.  People are adapted to stay in water much longer in this dream.  Evil Depp & Carter are chasing her, but just as she’s about to get caught an otter shows up and uses crazy water fighting powers to drive them off.  The dream switches to the perspective of the otter at this point.  The fight is kind of like a cross between The Abyss & The Matrix.  Anyway, the otter escorts the girl to the headquarters of his team, which is built under the Statue Of Liberty.  He takes her to meet the head of the family “Fat Tony”, who is a Hutt looking sea cucumber, or something.  Long story short the family vows to protect the girl from Evil Depp & Carter.  Eventually the bad guys come back with their whole team.  Thus begins the most awesome underwater battle ever.  I woke up before the fight was over, but I expect that the good guys would have won.

Well, there’s a definite Tim Burton angle, here…. One question that might change things is how (or if) you know this girl. Also: You watch a lot of movies.

Crave: I did not recognize the girl.

no way!
I had that exact same dream!

Tim Burton rules. I wonder if Reggie’s been beaten up by that woman yet.

bingo, idea for the final battle between Reggie and Brooksie… and… his mum/sister/fellow-evil-doer? :s

That was a very interesting dream. Thanks to you telling your dreams I’ve had some vivid ones too! For instance, I had a dream two nights ago about a Hump Back Whale, jumping from the seas where I was watching on a Ferry, jump onto the boat and kind of crawl with it’s fins to meet me. I was surprised and a little scared, since they are pretty big, but someone told me to not worry as he was just saying ‘hi’. I didn’t know what to do he wanted to follow me and be with me, but he couldn’t be out of the water, so I think I put him in an enormous fish tank, till one day I re-released him back to his own family.

I’ve noticed something, a lot of dreams revolve around water, in some form or another. Tell us O wise dreamer, why may that be?

Crave: Well, humans are over 90% water. Maybe it wants to go back to the source.

You certainly have some interestingly vivid dreams. I have dreams like that, where it seems latent with symbolism or least meassges, yet I can’t exactly interperet them.

We were all at work one night and it was a huge Christmas shipment. One of the newbies gets a box of dvds and starts alphabetizing them IN THE BOX. I’m like, “TODD. Stop that. It’s a waste of time. Just put them in the section and alphabetize them into their section.” “But they’ll already be alpha–” “Just put them in the section!” A few minutes later, I see him doing what I asked — except he’s sitting in a rolling chair going about it at his own pace while the rest of us are steaming around the room like damned motorboats or something and I go, “TODD!!! Do you see anyone else sitting?!? Stand up and work.”
I could be a bitch sometimes but some things just piss me off.

As he stated, most dreams depend on a person’s own interpretation of the symbols seen. Sometimes dreams are nothing at all as well. And while in other facts dreams are just your mind going over something that may be bothering you and your imagination has turned the situation into a strange reality. To put it lightly, I think of dreams like a movie… there’s a plot somewhere in the movie and there is “usually” a point the movie is trying to make. So i feel as your mind puts itself into a movie like imagination while trying to solve a situation that has been bothering you. Unexplainable is the series of dreams that pick up where you left off… Which is something that is quite interesting to me since I have had several of these “Dream series”…

Anyways you have some crazy dreams. But I can’t say mine are much saner to another’s eye.

Okay… how about this:
I’ve been having really vivid dreams recently. In fact, the most current one involved me running away from a psychotic murderer with a chainsaw. The only thing that sets it apart from a stereotypical chase dream is 1) I actually catch the chainsaw with my hand and 2) even if I die, the chase keeps repeating until I die again or the psycho cuts his/her leg off. There were many parts to the dream, but this is the clearest in my head. I still can’t interpret it, though.

As for the author, I can’t help but feeling you might have something you hold close or have had for a long time (the invader zim keychain), and it could be a sign you might lose the thing you hold dear.

Of course, this is really superstitious, so don’t take my opinion too seriously.

Crave: That’s an iteresting theory. I’m not sure how much that keychain means to me, but still…

I wish I could have dreams as awesome as that and remember them… Night might be less boring. Though I can’t tell if you’re being serious or just making this stuff up for our benefit. Either way it’s hilarious. You never can tell with dreams.

Although dream mean different things to different people there are however common themes and universal symbols that appear in dreams. These thing for the most part have common meaning such a water means death, rebirth, eternity and so on.

It could be a nice and useful piece of info. We’re happy you distributed this beneficial information about. You need to stop us educated this way. Thanks for giving.