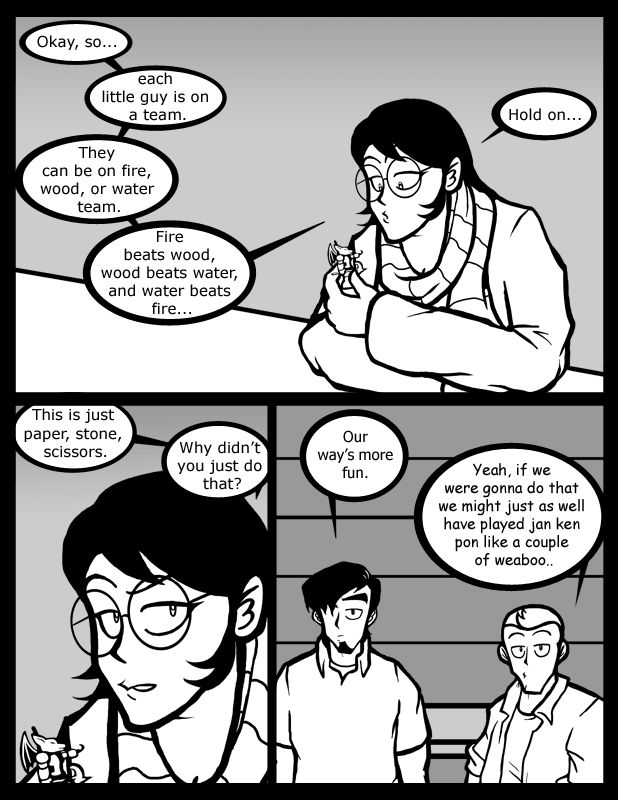 For the record, any of you who might be interested in buying the first volume of the comic might also like to know that it has the original dialogue for this page as of this posting, in which it read anime queers rather than weaboo. Further, I was unable to stop myself from tweaking John’s line and reformatting Jess’s. A minor distinction, but worth mentioning. The volume will be updated at my earliest possible convenience, but I’m not sure when that will be.

Just thought you’d like to know. There’s something of an explanation in the comments if you want to read more about it.

Ooww! Wait give me a secound to recover from that LOW BLOW!

I thought that was called “Ro Sham Bo”? HMMMMM!!!

I’ve been told that it’s not okay to swear; however that in fictional dialogue, it may be required, even of non-swearing actors I would guess he’d have paralleling advice about this retcon from queer to “tools.”

Compared to the unveiling of a certain anime-watching character, when did the retcon occur?

I’m afraid I don’t follow what you’re trying to ask other than the dialog change thing, so I’ll only answer that.

I’ve been thinking about this for a while because in the original draft of the comic script Thomas was WAY angrier with his life and with Thomas anger results in him kicking down. The queer line was going to be the start of an arc concerning the evolution of pejoratives and stuff like that. This specific instance was just going to a setup to establish this flaw in Thomas, but I made him mellow too fast and Reggie kind of took on the role of the person who needed the most teaching. Except I hadn’t ever done enough to establish the flaw in him, and by the time I realized it it was too late to get there with Thomas too. I’m not convinced that the idea is scrapped forever, but It’s going to have to be someone other than Thomas who starts it. The Reggie version might be salvageable, but in some ways he’s noble about weird things and I’m not sure I want to pin this on him. One of the 3 unnamed kids might work, or maybe even a new character, but I’m not sure. I may just forget it altogether. The knee jerk reactions to stuff like this are too hard to deal with since my storytelling style is so plodding. It might be better to just leave all the biting social commentary to David Willis because for the most part I just can’t stand to deal with it.

For my part I don’t use that kind of language anymore. Although I’ve only come to that after being out of Kansas for so many years. Back then it was so common to just whip out queer in conversation and think nothing of it. Even though none of us had a problem with homosexuality our language had not evolved past using queer as a pejorative and nothing came along to replace it. In the three or so years before I moved away my group of friends started really swearing constantly. To the point that it began to lose all meaning or impact. Plus, I was angry. Angry at everything. All the time. I sure didn’t care about how my language made other people felt. In fact I reveled in the harm I did. Hurting people seemed to make me hurt less, so I lashed out all the time. Trying to make the anger subside, but it just didn’t. Everything always sucked. Once I escaped, and was away from the influence of people in general, the better side of my nature began to wrest control away from the negative. I began dealing with my shit and stopped blaming everyone else for it. I started working it out through this comic. This little gem was a relic of that version of me. A version that, at this point, I’m not convinced I want to revisit anymore.

I finally made the choice to change the dialogue yesterday. After having thought about it for literally years now. But I didn’t want to make a big deal about it. It’s already in the few printed copies of the book I have sold, so I can’t ever erase them, but from here on out it’ll be this way. I don’t think the change detracts from anything, plus it stands out as out of character for Thomas at this point. I waited to long to get back to this thread so better to just tie it up so the sweater doesn’t unravel.

I did it without having even looked at the comments, for what it’s worth. I wouldn’t even be replying to this one if I hadn’t noticed it in the feed while updating another page. By happenstance alone do you get a reply.

Now that I think about it anime tools doesn’t really get across who exactly I’m trying to target here. I hate to use otakus because I’m not sure most people know what that means. I may yet edit this a further time if I can think of a more specific way to describe irritating anime fans. Maybe weaboos? Yeah, actually that would probably work even better. Except maybe it’s too obscure too… Although I’ve heard weaboo bandied about a lot more recently than otaku by far…

I’ll have to think this over a bit more. Hope that answered some of your question anyway.

Wow, when you explain something you do so in detail. Understandable, makes so people don’t misunderstand you.

You may be a different person now, but if you’re going back to change things you earnestly did in the past, trying to cover up perceived errors…. well, you ain’t owning your mistakes.

didn’t seem to be a cover up, more of a well-considered correction, imho

anyway, I abhor the concept that everyone “must pay” eternally for all mistakes regardless of scale or originating reason (or lack thereof) so personally I would have been fine with just the correction without comment, though I find the explanation interesting and a bit gratifying

I also like the fact that the correction is character-driven, rather than just random political correctness

for myself and my daughter, who is heavily involved in that corner of the human rights movement, I appreciate the correction, pejoratives may have no directed meaning to the ones using it, but there is potential affect on those who hear it without the internal mental context of the speaker