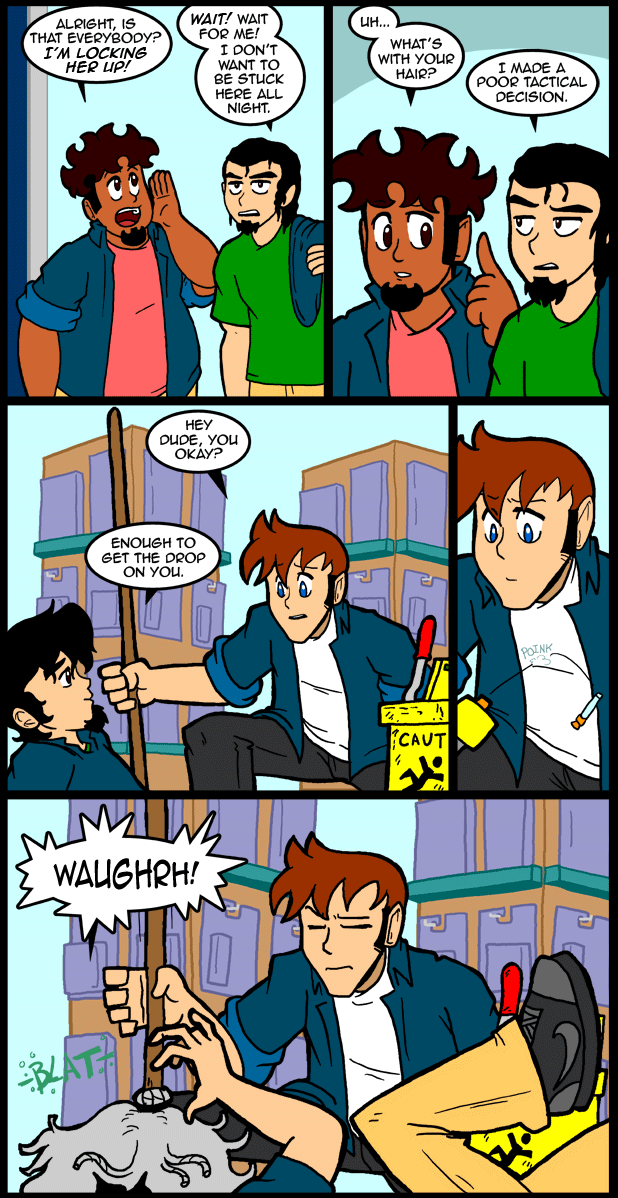 This page was going to have a 6th panel at one point, but I just dropped it because I felt like the two jokes were competing with each other. I kind of wanted a panel to transition from John’s memory back to the present though. I may yet add one in, but I’m not sure. The flow to the next page isn’t bad, but I don’t know… I’ll worry about it later.

I beat New Super Mario Brothers 2 the other day. I didn’t think it was really going to be the end because it was kind of short. After I beat Bowser I kept expecting him to make a path to the next area for the real last levels, but the credits started rolling… Huh, okay… I didn’t get all the special coins, or find all the hidden areas, so I still have that to do. I’ve 100% completed every Mario game since New Super Mario Brothers, so I may as well complete this one too. It’s not like it feels like a chore either.

I enjoy these games. That said, I think it would be more appropriate to say I enjoy this game. The New Super Mario series is not so much a series as it is all one long game. Don’t missunderstand me, I’m glad they are doing this. I like that they keep every good thing from a game and switch up the power up items. It seems like the design overall is starting to suffer for it though. I didn’t feel like this going from 1 to Wii. Maybe it was because the control scheme was slightly changed, or the levels felt less claustraphobic, I’m not sure. The fact reamins that NSMB2 feels off while somehow not being off. It’s hard to explain in words. I really like that the coins actually matter in some way. Even though they don’t have any in game function beyond gaining lives it’s still cool that there’s a reason to care about them. I’ve gone through the other recent Mario games without really even paying attention to coin placement because who cares? I don’t die enough for it to matter. That counter at the bottom of the level changed the way I played; going out of my way for even a single coin. That felt good. On the other hand the levels themselves seemed less innovative than the ones in 1 and Wii.

How should I explain it… In NSMB the levels were very… stable. They had a solidity to them. It felt like you could stick your landings. It’s a vague feeling, but it’s there. There in a way that you don’t notice it. In NSMB Wii the levels were clearly designed for speed runs. More often than not they were long, but you could traverse many of them with out leting your feet touch the ground for more than a few seconds. You COULD slow down and look for stuff if you wanted to, but if you just wanted to get to the end all you needed to do was run like hell and jump like a champ. On the surface that seems like it would suck, but it doesn’t. It’s crazy fun to try and make it through a level without ever stopping. At the same time the multiplayer works within that framework somehow. NSMB Wii is strange because it’s a great single player game that seamlessly becomes a party game. I think people gloss over that, but it’s pretty neat.

In NSMB 2 the ground feels trecherous. Most levels feel like they are designed to slow you down; to make you stop and look around, and it feels wrong. Also, the flight powers of the racoon tail make the levels seem cramped. A lot of the time, even if you can get a run up to fly, there’s nowhere to go. You leave the edge of the screen and lose sight of yourself till you drop. Some levels have sections where you can explore vertically, but there doesn’t seem to be much reason for it. It’s more like a gimick than an actual part of those levels. It’s like they said “This level is horizontal, why don’t we hide some random vertical bits so it takes longer to find the star coins?” sticking those parts on after the level was essentially complete. You have an item that allows you to fly, but there’s nowhere to fly TO. Most of the time the only thing you’ll use the tail for is controlling your falls and occasionally whacking slow enemies. The power ups don’t fit the level design. It would almost have worked better if they traded out the flight one for another fireball style one. Ice flowers, or the hammer brothers suit maybe. Then you wouldn’t feel like you were shackled to the ground the whoe time. It wouldn’t be an option so you wouldn’t notice the restraint.

There’s also a lot of water levels. I doubt more than normal, but I just noticed them more because they were abnormally annoying. Several are designed around water flow that forces you to travel a certain way. It makes it fel like underwater Sonic the Hedgehog. You can go fast, but only one way. I feel like if they threw in some frog suits that allowed you to swim faster, and agains the currents, it would have helped those levels be less tedious.

As long as I’m at it I may as well talk about the digital download versis the physical release. They cost the same. That’s dumb. Why should digital downloaders pay for packaging? Some of that cost HAS to be for packaging. If there’s not packaging why the same price? I’ll tell you why. They are training people to accept the original price WITHOUT expecting to get the stuff that causes it. In addition to this there isn’t an instruction booklet in the case for NSMB 2. There is a single sheet of folded paper. It gives a simple explanation of the controls. It takes less than 3 quadrants of the front side for the instructions. The back is covered in the legal stuff. That’s all there is in the box apart from an advertisement for other games and the code slip for Club Nintendo. Where is that reduced cost going? Not to my pocket, and that bugs me.

I haven’t looked in an instruction booklet for a Mario game because I needed to in years, but it’s the principle of the thing. I used to get this item included with the purchase I made at a given price. If it’s not there I don’t want to pay for it. What would I be wiling to trade for it? A digital download of the soundtrack. I don’t think that’s too much to ask for. The digital copy should absolutely come with the soundtrack if we’re not getting a physical copy of anything. This reduction of value is caused by the poor economy, but ALSO companies not being sure what they can get away with. They are testing the consumer to see where the boundaries are. We need to let them know what will, or won’t, fly. I’m probably the only person that noticed the instruction booklet thing, but make no mistake, it IS telling us something.

I am happy people enjoy digital downloads, but I have been against them so far for this very reason. I do my best to keep buying physical, so that I actually get what I pay for.

I like having boxes on a shelf. I enjoy flipping through new game manuals, if only to see any small art. If I get a game digital, it will damn well only be at a great sale price.

If I have to pay for a box anyway I damn sure better be getting a box.

One thing that that costs for digital d/l that don’t for brick and mortar stores is the datacenter space and the 24 hr service to make those games available for d/l.

It has to take less people to run a datacenter than to organize distribution and shipping. No matter how you do the math.

Yah .. we hashed that out over Kindle books awhile back. No inventory, no inventory CONTROL, no printing, no shipping, no warehouse. And the space to actually hold the books is teensy. You can’t count Simon and Shuster or Amazon’s entire data center structure in totting up the cost of Kindle books. Or software downloads.

Hahaha, Thomas’ face! He looks like Brock from Pokemon!!

Also, clever of them to stay late and “close the store” wish I could pull something like that…

It’s all about taking precautions and managing risk.

Chalk to the shirt = mop to the head, seems the natural order of things.

Much better than a boot to the head.

I noticed that Thomas: looks like Lupin the 3rd.
Just an observation.

That’s so weird. I can’t belive no one has ever noticed that before… I’m a little freaked out now.

I’m having a hard time trying to figure out if this is sarcastic or not.

You, sir, are great inspiration.

*goes searching for a mop and a coworker*

Ah, good point. Hadn’t thought of the digital download thing. Never bothered to look into it ’cause I like having the box and a shelf to show me how crazy I am as a collector *ahem* but beyond that, it’s just nice to see what you’ve got.

Didn’t even know the digital stuff was the same price. I mean, look at the price of games when they switched from cartridges to CDs – it went WAY lower. I found this old Toys R Us catalog that my young self kept around to point at (“look, I want this!”) and the Super Nintendo games ranged from 60 to 80. That must have taken TREMENDOUS effort to convince a parent to drop that much back then!

Anyway, the point is that different materials equaled different price. Now that the materials are absent entirely…well, just as you said: why are we not seeing a difference? There’s something in the video game business that has changed drastically over the years, but I can’t put my finger on it completely. They’ve been watching…is the best I can say. Back in the day it seemed more like they were at our fickle mercy, but now it’s the other way around.

Ayn Rand’s “The Fountainhead”, published in 1994, is Kindle priced at $12.99 and is more expensive than even the hardcover edition. Kindle pricing has gone through the roof .. we’ll be back to buying paperbacks soon.

And that’s why I get all my ebooks from Project Gutenberg.

I like it the way it is, as current.
It’s perfect with the cartoony -.- *mop to face* thing ending it off. We know this was a backtrack and ending it off with the mop-to-face just completes the image.