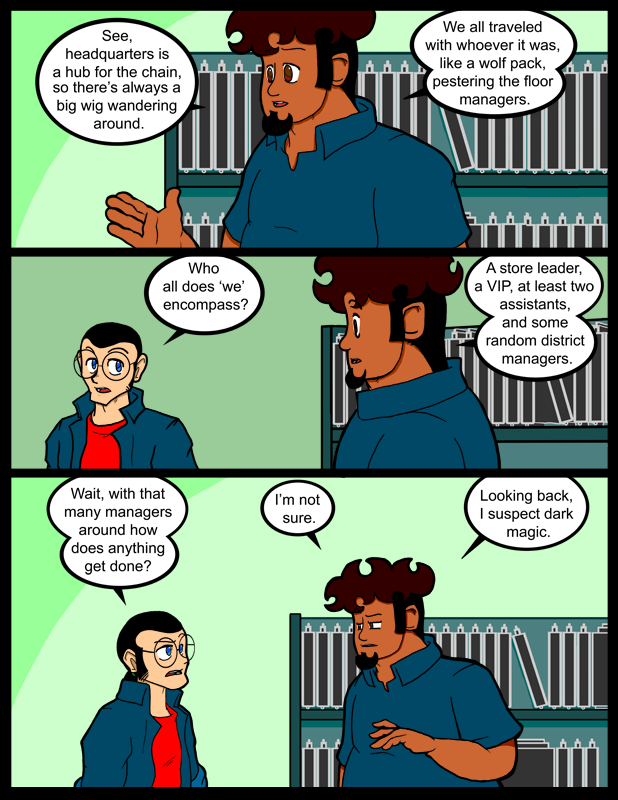 I finished Super Princess Peach the other night.  (Sunday the 12th)  I got to the last level years ago, but the game demands that you save every toad before it unlocks the final boss.  The last 4 toads remained in captivity this whole time mainly because of how annoying it was to track them down.  After you finally beat Bowser there’s virtually no ending.  I’ve all but forgotten what the story was with her magic, talking, umbrella.  Honestly, they could have just given her the umbrella and told the audience nothing, for all the difference it seems to make.  It’s not a bad game by any means.  I enjoyed playing it, but it lacks something.  This may not make sense, but it’s not quite Nintendo enough.  It comes across like a game made by someone desperately trying to be like Nintendo, but falling just shy of the mark.  With a little tweaking it could have been spectacular, like the first real Wario game was.  That said, if they made another one I’d want to play it.

I saw that there’s gonna be a New Super Mario Brothers for the Wii.  If it’s as good as the DS one it’ll be a total hit.  One of those games that kids who own PS3s and 360s will come in asking for, and clerks will have to explain that they don’t make it for rival companies.  And those kids won’t understand, and their parents will come in and yell at the clerks for being difficult, because the apple doesn’t fall far from the tree.

I remember back when the Dreamcast was still kicking and kids used to do that with the Sonic games.  People would tell them “Sonic The Hedgehog will NEVER be on a Nintendo system.”  Now the little bastard is ubiquitous.  Not that saying something similar about Mario is unreasonable, I’m just saying.

Read even more of my ramblings by following this link!

And what if I own no new game system? Huh, what then? Just got an XBOX down stairs and that’s it! I remember the Wario game, I loved it. I beat it so many times, it was just a good repeatable game. My friend got a Wii as a gift, but after about two months of playing we soon got tired of it and it has collected dust up until three weeks ago where we pawned it at a local Vintage Stock. Ah well, it’s not for everyone, however, I wonder how The Conduit is holding up in reviews…

So I have to get all of the toads first, well thats gonna suck. My friend has a Wii and i’mn over there most of the time (I spend almost no time at home) my dreamcast and SNES are over at his house, all I have at home is my 360.

DARK MAGIC… YES THAT COULD VERY WELLL BE THE KEY TO THE AIR FORCE GETTING ANYTHING DONE AS WELL….

Oh, Sega, why did you quit making consoles?! And how did Sonic games end up getting so lame? *cries*
Good thing I got SSBB, for a lil’ Sonic fightin’ action! ;) But now you got me wanting to dig out my Dreamcast and fire it up…or maybe even my Genesis…

It was promoted to me that there would be rambling, instead you mostly just answered the questions. I call foul! Where’s my rambling?

I wanted to buy that peach game, but I was afraid that my friends would mock me because of it. Also the fact that she gets powered up when you touch emoticons, thus meaning that her emotions give her super powers somehow, and that was just to ridiculous for me.

btw, i probably would never find out that you have to find all the toads first, because i’m a completionist and would have done it way before the last level. (not bragging, i just waste LOTS of time trying to unlock every thing first. I still haven’t beaten twilight princess cuz I’m trying to get every heart piece. T_T

COkane, that’s just the same exact thing I do with Final Fantasy games. That’s the reason every now and again I forget what my obejectives are and have to start talking to everyone to get a clue…

I whish they had a Quest menu (they had one in FFX-2, but that game was… I’d rather not say)

Am I the only person in the whole wide world that enjoyed FFX-2?
Maybe I am just the only one that will admit it.

I know nothing about the Peach game and probably never will except what I have learned here; this day. Peach and I have a long running rivalry. There are emotional scars and everything.

Damn you black magic, and your seamless induction into the retail sector! Damn you to hell!!!

Three assistant managers, and it took two to follow a big wig around? Unless the big wig appearances were a lot less common than Mike indicated, I can’t imagine how that scheduling worked. Or are these stores that were only open 8 hours a day or less, so there wasn’t any shift work?