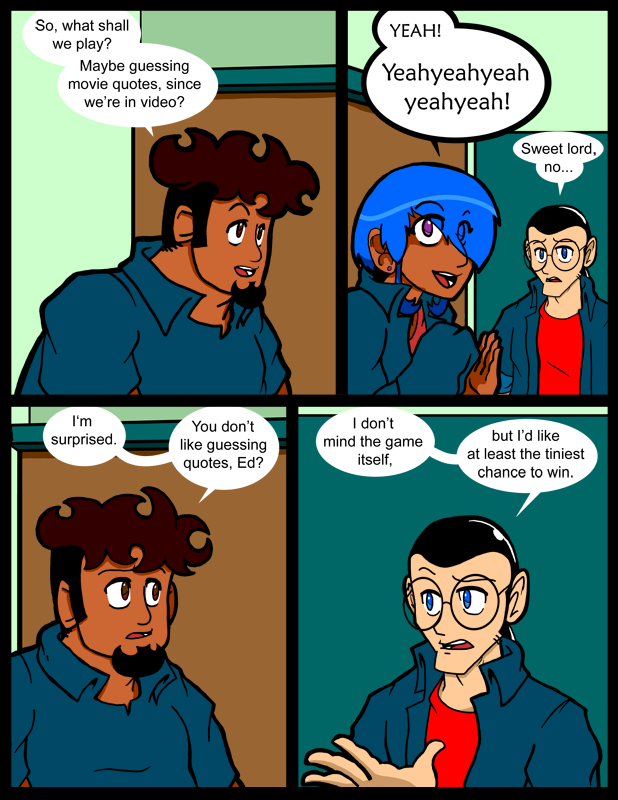 What the heck was I going to talk about?  Where is my note?  Why are things so disorganized lately?!    Guh…  Well, let’s just wing it again.

My Pokemon team was able to defeat the elite four, barely.  I managed to “complete” the pokedex soon after that.  Now I’m breeding new Pokemon for battle frontier teams, and to truly complete the national pokedex.

It set me to thinking about the nature of the pokedex.  How is it, if it doesn’t already have the data, that it instantly knows the name of a pokemon the first time you see it?  I mean you need to suspend your disbelief to accept a lot about Pokemon to begin with, so something like the reverse nature of Pokemon research shouldn’t pose a problem.

I’ve been sitting on gift cards since Christmas but I finally nearly used them up.  A lot of the older CN Adult Swim series have dropped dramatically in price.  I ordered Harvey Birdman S2, Sealab 2021 S2, and Frisky Dingo S1 last night.  I expect that they will not appear until Monday.  After Harry Goz (Captain Murphy) died Sealab lost much of it’s appeal.  I’m only going as far along as the seasons he’s in.

I hope they do another season of Metalokalypse.  I thought that show would suck at first but I ended up liking it a lot after I gave it a chance.  Another Lucy, Daughter Of The Devil would be agreeable too, but it doesn’t look good for that series.  All I know is that I need more Todd Barry in my empty life.  I got a little from Jonathan Katz’s podcast, but it was insufficient.

If Mitch Hedberg hadn’t have died I think he Todd Barry, and H. John Benjamin could have done some really great shows as a team.  Maybe even some movies.  The stuff done by the remaining members have been very good, but I get the feeling that D.J. Jesus was a part written for Hedberg.

I think the holiday will spoil your Adult Swim watching…Federal Holiday, homie.

Hello, there! Glad to meet you! Welcome to the world of Pokémon! My name is OAK. People affectionately refer to me as the POKéMON PROFESSOR.

Wait, my bad. I’ve just playing for a long time. Here’s the Twitter mentioned thesis on the topic. It’s a lot of speculation and stream of thought since I haven’t actually sat down and written academic papers on the subject. Yet.

It’s not too weird for the Pokédex to be able to recognize 90% of Pokémon on sight. Even setting aside technological differences between the Pokémon World and here. Think about it, Oak had been researching Pokémon and developing this device for years. The creatures themselves are established parts of life. Aside from legendaries or created ones (like Mewtwo), the Pokémon League itself would likely have pictures and some data on each species. Hell, Oak had three Pokémon in his lab (he was too lazy to add their data for you?). I mean, in Kanto for example, Pidgeys are everywhere, so it’s not like the character is discovering them for the first time.

So some better working recognition software would account for identifying these species. Now, the more curious question is how, just by catching one, you get in depth information about the animal’s behavior. Since there’s a Pokémon retrieval system in place so you’re not carrying over 6, maybe the Pokédex accesses a Pokémon League Wifi network. The ‘dex itself is suppose to be an encyclopedia of this data. Perhaps the act of catching one will retrieve and organize the known information. (This adds further to Oak’s laziness then because he could just as easily collect this information from the league and organize it himself.)

All this, of course, is Kanto region Red/Blue/Green. Continuity wise, the first games take place at the same time as Ruby/Sapphire. So the Hoenn Dex being empty is just because it’s developed at the same time.

Diamond/Pearl/Platinum take place at the same time as Gold/Silver, which is about three years later. So here’s the big question. When Oak “upgrades” the Pokédex, why not include the already collected data from the other regions? That’s the mildly confusing part. Is he really THAT lazy? Alternatively, since he (or the other Professor with random connection to Oak) apparently only hands Pokédex to certain trainers, it may be kind of an aide to motivate greatness in encourages the capture of multiple types of Pokémon. This is where the speculation really gets out of hand…

This has been your unnecessary Pokémon Lecture.

As for beating the Elite Four, very nice. What’s your current team consist of? I’m prepping mine for another go through the Elite Four, so I’m doing leveling while collecting for my National Dex. (This being in Platinum since I have the dex full in Pearl.) Platinum National Dex for me is around 3/4 (over 300) seen, about 1/2 (around 250) owned. I’m trying to get as many as I can without just a bunch of trading over.

I’d like to add real quick, Oak’s speech at the beginning of that? I looked it up. I’m not THAT insane to have it memorized.

Aaand there goes the reassurance of my sanity.
Oh well. Sanity’s overrated anyway – er, I mean, SANITY IS FOR THE WWEEAK!!! BLOOD FOR THE BLOOD GOD! Skulls for the Skull Thone! *ahem* That’s better.

I always thought to Pokedex was meant to gather further data about known species, it isn’t explored much in the game but I bet a better way to look at it is that seeing a Pokemon unlocks the entry for it to encourage you to see more. Every time you see a Pokemon the Pokedex scans it and sees if theres anything unusual about it (shiny, different unown, etc) and adds it to its memory.

Or you can all jsut accept that the pokemon and therefor the pokedex is all evil witchcraft!
Metalocolypse is a way better way to waste time! “we are here to make coffee METAAAAL!
x

:D I like Ed’s reaction. ^^ Mike must not come out in the store much…

Venture Bros and Frisky Dingo have always been my favorites. BOOSH!

Win? When you play movie quotes, everyone wins!

I can’t believe Frisky Dingo left us with a cliffhanger.

J.T. – They better bring that show back or… or… I will likely cry softly into my pillow for many nights.

True. And how about this:

Wailord: over 40 feet tall, longer than it is tall. It and every other pokemon fits in a ball the size of an apple.

Shaymin/Giratina: by contact with substances, their anatomical structure is rearranged.

Fainting: Shouldn’t being hit by lightning, blowtorched, etc. kill it?

Oh, and if you have no qualms on cheating, buy an Action Replay and download Pokesav, which is open source.

Another pro wrestling link in the title?

I’m just breakin’ it down :P

I just pictured Brooksie waddling around like Vince McMahon with his theme music playing XD Oh Lord, it doesn’t get much funnier than that… Unless she had a penguin on her head… A Purple Penguin, wow, that’s a pretty random thought, but whatever it OWNS!

“You either need more medication or less; I’m not sure which.”
Quote notwithstanding, you win and I desire caffeine in chewable form.