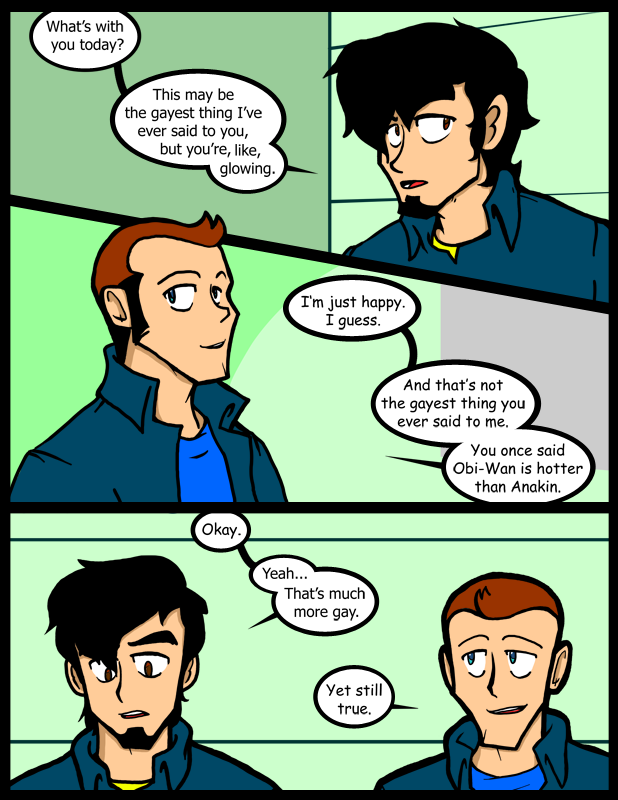 By the time this page is posted the new Star Wars cartoon will be showing, and there’s a pretty fair chance I won’t have seen it.  The internet, however, will be saturated with the bloated, gassy, opinions of every Star Wars nerd with a blog and some spare time.  I expect that it will be hated, as much pre-classic cannnon is hated.  All I’ve been exposed to is the soundtrack, and it didn’t move me.  That may not mean anything though.  I disliked the Battle Of The Heroes theme when I first heard it.  Now it’s one of my favorite themes.

I used to be a really obssessive Star Wars fan.  Action figures were like nerd meth.  It was really funny though, one day they increased the price enough to make me see reason.  Then it was all over.  I was done.  Once in a great while they make a new figure I just have to have but, for the most part, my collecting ended one fine day in a Target store in western Kansas.

yays! first again. good comic btw. i have not seen that movie yet, but i dont care how many “fans” of starwars say the movie sucks because i believe that everyone has their own opinion of things. just like my opinion that people who are against what i just said and dont give a rat’s ass about others are fags and should do the world a favor and just die! this message was brought to you on a psp. bloody torture

Wow….I can’t help but wonder what got them into THAT kind of conversation in the past. o.o

Man I read that, thought about it, and totally agreed. The Anakin Obi Wan thing I mean. As for Star Wars, I just really don’t care. The original were good, the new ones not so much. Everything that can be said has been. I just look forward to the day I show them to my grandchildren and watch their confused faces.

Does anyone else think George Lucas should move on instead of milking star wars?

“Pre-classic cannon”? Didn’t they use that in the 1812 Overture?

The new movie animation style makes me want to literally vomit. I loved Clone Wars the tv series. The new animation is just really stilted. Yuck. It nauseates me, as much 3D stuff does. There’s something wrong with my eyes. ^^

Obi-wan’s beard is just too damn sexy. I wish I had one just like it.

I just laughed so hard my sides hurt.

Yeah, I remember my first Star Wars toy. I saw the new Clone Wars movie and i gotta say, I hope it’s a better show than it is a movie, and I also wish that they had just kept the design from the other cartoon which was much better.

I’m proud to say I ruined the fantasies of a large group of nerds at once, By totally trashing the third movie in the theatre. Normally, I’d be classified as a loud mouthed asshole… but Episode III deserved that, and so much more.

Many a fine dream end in western kansas. Trust me, I know, I live there. I think the only star wars toy I really ever wanted was a jawa, just a little army of jawas and maybe a mandalorian or two. Now I must go imagine Sir Alex Guinnes in a thong, enjoy that thought. Peace.

OH YES XD!! This is AWESOME!

Hell yes Obi-Wan is hotter than Anakin could ever aspire to be. Even when he was on Tatooine, really. But then, whiny boys always make me cranky.

I still remember this moment from the first time I saw Episode One (feh): as Obi-Wan bent over the dying Qui Gon I thought, “Holy heck, he’s going to kiss him!” Didn’t happen, but it certainly colored my perception of the movie. Frankly it would have been much better if he had kissed him.

To everyone who pointed out that “canon” should contain one N and not two: now many of you noticed it was in this case actually spelled with three? :P

Aaaaaaaaand the high ground is lost by mis-spelling “how.” Dammit! Guess it’s time to lose a few limbs.

Hahaha, but I agree. Obi-Wan is way hotter, no matter how gay it sounds

To be fair, Obi-Wan didn’t go through an Emo phase.

Obi-Wan is hotter without the beard. Anakin is cute though.

Qui-Gon was hotter than both :p But I so want a flashback of that situation. XD

I realize I’m late to the conversation, but I decided to do a re-read and had to drop in. That being said, technically speaking, by the end of RotS, Anakin definitively hotter than Obi-Wan. I’m he was in fact, literally on fire and all. :P