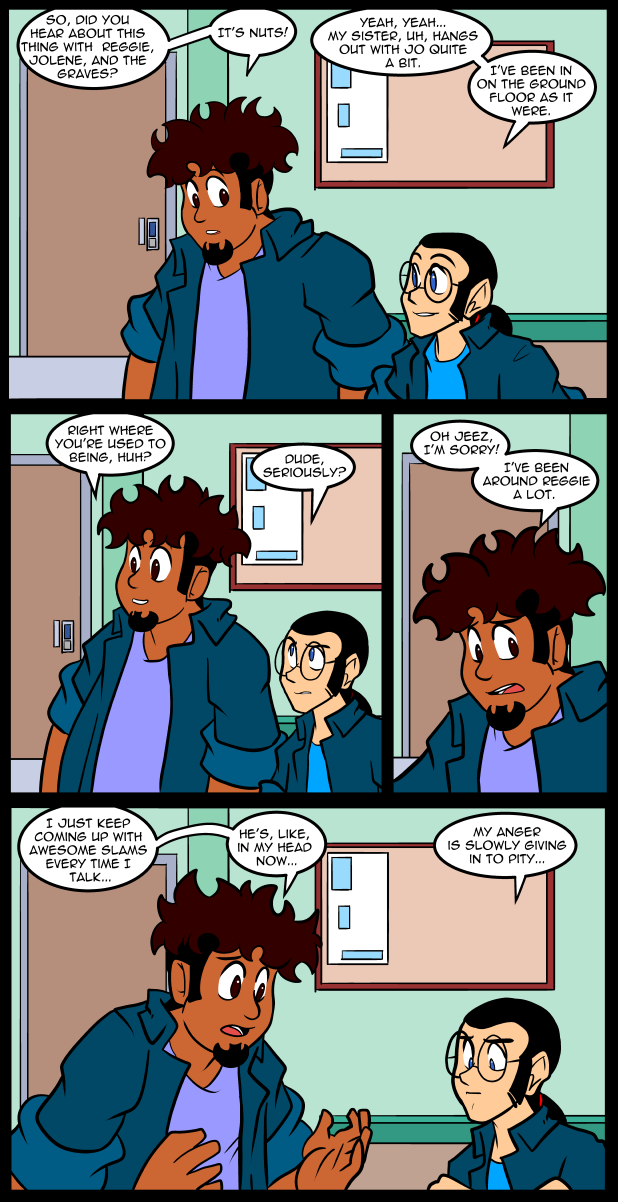 Mike is having a problem that I saw a lot with young. single, managers. It’s really hard to make friends once you’re just out in the world. People tend to default to whoever they work with if they end up in a new place, but sometimes that doesn’t work out. I’ve seen lonliness do a number on a few managers. It led to failure in cases where they had to endure the new environment for longer than a few months. Sometimes to the point of total breakdown. Living like a work hermit is only for the most stoic of humans.

I just realized my count is off for my days. I never made Friday’s page because I was sick, but in my haze I thought I had. Oh well, I guess I’ll finish it tonight and hopefully get back on schedule by the end of the week. I was up working early today anyway so the page is partially done because I thought it was for Monday and I was trying to get ahead. My sleep schedule is trying to shift back to being awake in the morning, which is good because I can be awake for appointments and work when I don’t have any.

Tomorrow I have to get some blood tests done, which is irritating. I really need some time to focus on work, but shit just keeps happening. Maybe it will be good news this time and I won’t have to go back over and over again. My insurance will reset at the start of the year and if anything happens I’ll be back to paying for everything again…

At this point it looks like the company that “handles” my c-pap fucked around for so long that I won’t be able to get any supplies with the aid of insurance. Everything will have to come out of pocket. The long and short of that means that I basically won’t have new supplies on a recommended schedule. I’m not sure what the actual health risks are as far as that goes, but I’ll just have to get what I can when I can and hope I don’t end up with a lung infection, or some shit. The hoses aren’t too expensive, but masks and things I’m not sure about. I’m not really sure what my options are, but maybe I can find some place where I can buy supplies myself and still use my insurance. I’m not sure exactly how all of this is set up, but based on my experience so far I think I may as well get the lube ready for the deep, deep, dicking I’m going to get.

It was really nice today while I was thinking I was back on schedule for a little while. I had almost forgotten what that felt like. It was a real bummer when I checked my archive and realized I was off. I spent most of the day feeling like I had some time for a change. The days when I had my shit together seem so far away now. I thought I was always scrambling for time then, but it doesn’t even compare to now. In retrospect it was like this glorious time of having a two week buffer and time to plan my actions. I could stop and fuck around with shading and stuff. What a luxury…

Maybe someday I can have that again.

I got a stack of Lego to enjoy for Christmas. It’s very calming to just follow the instructions and make something. For a few minutes it’s like turning part of my brain off and not feeling like everything is falling apart. After that it’s nice to look over a completed thing and see if I can improve it with parts I already have. I got the Mystery machine from The Teen. We are both fans of Scooby Doo, so she lives her childish desire for toys through me, while not having to clean up, or store them when she’s done being nostalgic. I stripped out the inside and added more storage for tools. Scooby can sit in his spot and a human can use the computers behind him. Two figures can sit up front. I haven’t figured out a way to get three across yet. I did ad an extra layer of seat to the cab so that Daphne doesn’t lose her hair on the back shelf when she sits. I also added some flair to the roof of the van so it looks a bit more cohesive, design wise. I would have loved this when I was little, except I was really pedantic about accuracy, so the lego figures would have probably annoyed me by not looking exactly right. Then again, who knows? I liked transformers even though they barely looked like what they were supposed to. Star wars toys too. Looking back now the original ones were garbage. my memory of them is way more movie accurate than they actually were. not like now where they really do look exactly like they should.

I remember the xmas after Jedi came out. I got the ewok village and the emperors shuttle. I played with those things constantly. They weren’t always star wars stories either. that shuttle was a downed base for battle beasts and all kinds of things. I sold the village when we moved, but I kept the shuttle. it’s still in the basement. It took all my willpower not to buy a new one when they rereleased them. It was lucky that I ended up with the shuttle because I didn’t have an emotional attatchment to it. if I had gotten the falcon it wouldn’t have been as able to paste my own stories over it. Too much happens in it. the empoerors shuttle is just a gnereic craft, so not being special made it so it could be anything in my very ordered kid mind.

“Living like a work hermit is only for the most stoic of humans.”

It doesn’t require stoicism, but it does have a definitive cycle. There are long stretches where I’ll only ever leave my apartment for work or to scavenge up some supplies, and this can last anywhere from 4 weeks to 3 months. Eventually, I’ll start to get a bit lonely, and wonder aloud why I shun all human contact, because I honestly can’t remember why I’ve been living like a hermit.

Then, I’ll attempt human contact for 5 minutes, and I’ll go: “I REMEMBER NOW.”

It doesn’t require stoicism. It just requires one to be a bitter, jaded, hateful, antisocial misanthrope.

It takes a certain amount of stoicism to maintain the will to live when you wear the jade glasses, though.

The one size fits all management style doesn’t work for Mike.

Yeah, he really shouldn’t be so small minded …

Exactly! Mike + Eddie need to stop being so short with people.

Right! And anyway, cutting people down is a really bad hobbit.

Heh, I never had a manager like that. All the ones from my retail job made friends with all the employees. I really do mean friends because the store was small we only had like 5 people max. I remember some days going into work and just playing video games in the back; swapping turns every other customer. Oh man, the hours of WoW mining that occurred.

Now I work for a much larger company but my boss is still friendly and mingles with all his underlings. He is probably one of the last few that defends and protects his underlings. I’ve even played card and board games with him on breaks.

You should check out cpap.com, it’s got lots of mask and accessory options, and if you get your doctor to fax a prescription or you scan one into the computer they will bill the insurance.

The downside is that you can’t try things on before you buy them, though, so be sure to read the return policy.

You might also check this place- http://www.exmed.net/c-54-respiratory-care.aspx I have no idea how their cpap prices compare, but they appear to be much cheaper on some other things that I’ve bought elsewhere. Also, what do you think of this image? (Scooby, Velma, and the van.) http://comicsalliance.com/halloween-comes-for-zombie-hunter-scooby-doo-and-skeleton-linus/ I hope this link works right.

Request: Pics of the van rebuild?

Need to be Reggie cleansed

I was picturing more of an exorcism.

I think you can clean him off with a heavy duty, cleaning spray.
I think it’s a brand called: Reggie-cide.

Excellent suggestion! I think I’ve heard of that brand — isn’t their slogan something like “For when you really need to get rid of a royal pain in the ass.”?

Legos are cathartic. It’s like being a kid again where your only real responsibility is finding the next piece. Damn expensive, though…