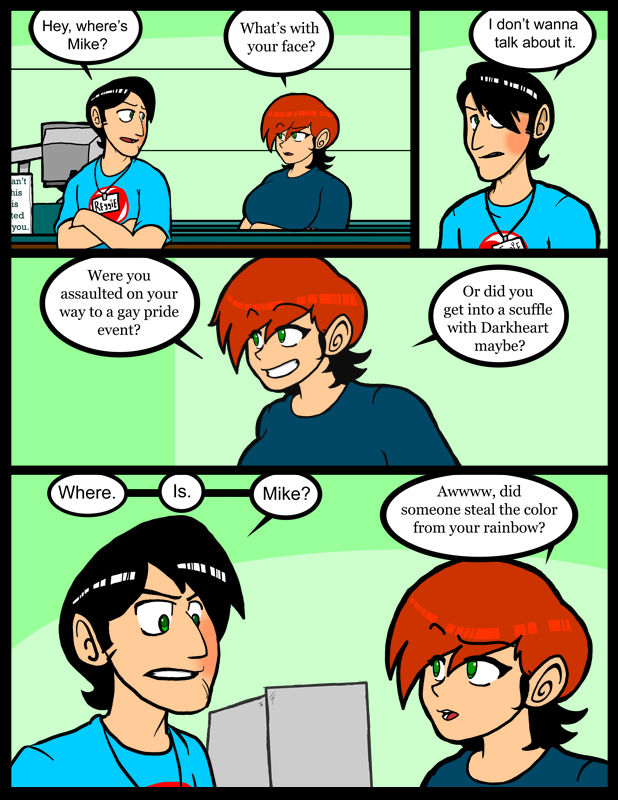 Had a two dream night last night.  In the first dream I was hunting down a brutal killer with C-Hutch.  We were driving, at killface speeds, the mean streets of some fictional Kansas town.  (Killface is now an adjective too.)  I was driving some kind of pickup.  It cornered well, so I was able to keep up with the faster vehicles when they tore down back alleys.  C-Hutch had some kind of sports car.  Might have been a Dodge Charger.  He had to catch up in the straights, since it didn’t corner very well.  The killer switched cars from time to time.  The last thing he drove was a big semi.  The best part about that was when C-hutch and I jumped our vehicles, simultaneously, through the trailer, going opposite directions.  Quite possibly the most pointless, action star, moment in any dream I’ve ever had.  In the end we tricked him into crashing his truck into a wall.  He died in the crash, and the world breathed a sigh of relief…  except for our police chief!  Bu du dun dow!

In the second dream I was helping my dad clean up random trash at his work.  It wasn’t the real place, but a combination of similar locations I’ve seen before.  One of dad’s workers had been killed in a freak accident, but he wouldn’t tell me about it.  It clearly bothered him, but he never said anything about the incident.  I came into the dream already knowing it had happened.  Anyway, the setting was built funny.  There were hills, and little walls set up in strange places.  They were waist high at their tallest points, but didn’t look like they could keep anything in, or out.  Just before I woke up dad was showing me evidence that a homeless guy had taken up residence nearby, and was fiddling with equipment.

Haven’t seen Carol in a while but I’ll forgive you.

Nice to see she’s her usual charming self. I was wondering how these two would interact, and now I know.

I’m stupid. That was care bears.

J.T. – I think similar things happened in Rainbow Brite too. I’m going to allow it.

MY favorite transformer was Inferno (from Beast Wars).
“Ahahahaha! FOOL! Pain is my friend–allow me to introduce you to him!”
“You’re no match for me! Burn, traitor, burn!”

I love that crazy maniac.

I don’t get Care Bear references because I haven’t seen that show. However, Carol is hilariously vicious in her grilling of that douche Reggie, and I can totally respect that. That evil grin in the third panel is perfection.

JEEZ dude you have some crazy dreams, why are so many of them about murder?………yay it’s Carol!

Sheesh. I thought he had seen the limits of everyone’s dislike of Reggie, and then Carol not only raises the bar, but moves things to an entirely different league! It looks like Carol is actually trying to pick a fight with Reggie, but knows that Reggie isn’t going to take the bait. She’s enjoying watching him squirm like a worm on a hook.

Not that he doesn’t deserve it…

I love Carol’s grin in the second panel. ^^

Reggie is learning an important lesson: actions have consequences, sometimes far-reaching. No doubt he has goaded Carol before, and is now reaping those seeds. :)

No not so much stole at as dumped it on his shirt. Like how the heart is right under his nametag, reminds me of how the wizard of Oz cured Tinman of lacking one.

quick question. as the strip goes on, do the gay jokes and ableist jokes (using the word “retard”, making short bus jokes, etc) ease up or stop? i love the strip so far, but those are some pretty big sticking points. i’ve had some rough experiences dealing with the “haha ur gay” and “wow r u retarded” crowd, to say nothing of my friends who’ve had it worse.

Sometimes characters who are especially mean spirited use hurtful language because it is more realistic than other choices. Those moments are chosen for a reason. They are rare because most of the main cast are relatively good people. If I think the character warrants that kind of talk for a given situation to feel plasible I will use it. As I said though, it is rare.