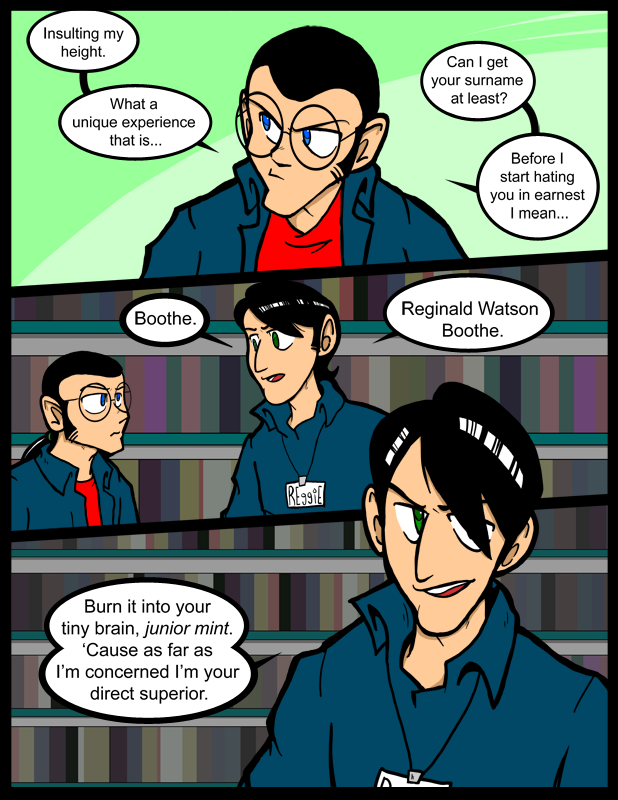 I didn’t have to be on the jury, which is probably good for all parties involved.

Okay, so you know how when you were in school these was always that one guy who had the big sideburns and wore the paperboy hat,  or the guy that always came to school in a suit and tie, even though there wasn’t a dress code?  I wasn’t either of those guys, but I knew them.  I hung around with them.  I’m sure that if a person went to a larger school there would be more than one of these guys wandering around.  Honestly, they’re douchebags.  Maybe it’s easier to see that in retrospect, or maybe it’s easier to remember them since they had a uniform to accompany their douchiness.  (For the record, I was the nondescript fat guy.  Not to be confused with the popular fat guy, like your Chris Farley types)  I’m not sure, but I know these archetypes still exist.  I see them wandering around.  The funny thing is that their parents don’t seem to be the earlier generation’s hat guy, or suit guy.  They simply take up the mantle spontaneously.  Like they get possessed by some shared memory.  Usually they grow out of those tendencies, but it seems like they are forever marked.  The suit guy ends up liking expensive coffee and wearing corduroy jackets, and the hat guy eventually starts selling weed and gets all political.  Strangely, they both have a predilection for wispy beards…

Why do I bring any of this up?  I had a dream where I was the suit kid.  I wasn’t myself, but I was playing the part of the young debate enthusiast.  I was hanging out with a group of teenage stereotypes, one of which was hat kid, and ended up getting soda spilt on my pants.  Of course I had a spare set of clothes in my briefcase, along with my debate notes, so I went to the unisex restroom to change.  I’ve never heard of a school with unisex restrooms, but whatever.  It was a dream and it seemed logical at the time.  Anyway, I changed my pants and was checking my hair when someone started yelling through the door.

It was a fat girl named Natasha.  I have no idea why I remember that.  She wanted to know how long I was going to take, and I said that the door wasn’t locked (It didn’t have a lock on it.) and she could come in and do whatever she needed to.  So she did, and I went out.

That was the whole dream.  Completely pointless as far as I can tell.  Got me thinking about those teen stereotypes though.

I can tell something’s going to happen between the two, including Ed coming out on top

Student archetypes dont really exist anymore. With everything being so pc and watered down, there’s no room for any kind of status quo (hope I spelled that right) which I am very dissapointed in. I really wanted to see just a littel bit of a cliche high school, but I’m a seinor now and I have yet to be fulfilled. As for the suit thing, I do know a guy who wears suits every once in a while, but I think maybe he’s just trying to stand out or make up for some type of insicurity. Or who knows, maybe he likes it.
I can’t wait to see what happens next in your comic.

Phantasim, In my high school there was a status quo and there was only 900 students. There wasn’t a suit guy, unless you count the sport teams dressing up before games, but there was the emos, the skaters, the jocks((multiple cliches, because each sport had one)), the stoners, the nerds, the anime kids, the rebels, the artists, the preps and then you had me, who has a been of every cliche in him :D

Also I wish I could have a cool suit.

Just pointing out that a cliche and a clique are two different things.

A clique might be formed around a cliche. Or the clique itself might be cliche. But clique and cliche aren’t interchangeable.

Speaking of cliches, how bout that Lincoln-Boothe rivalry setup? Of course, in this case, “Boothe” is also the enemy of everyone else in the store, possibly in the world… Nonetheless, I saw this coming from the first time I read the cast page.

Lincoln and Boothe… you sir are hilarious. *applaudes*

Heh, that’s pretty amusing, especially since one of my best friends is acctually related to Booth. Love this comic, can’t wait for the next page. ^_^

I love the faces in this one. Ed’s first panel face is fantastic. ^^
There were no suit people at our school. We had a dress code. Yup.

I’m SO glad I didn’t go to a “cliche” high school. There were groups of people who usually hung out, and the kids that usu. played hacky-sac (sp?) during lunch, but the Vanguard program (which I was in) was laid back enough that there were no real cliques. If most of your usu. lunch friends weren’t there for the day, you could go sit with some other group, and they didn’t look at you like you were crazy.

There was no “suit guy” or “hat guy”, but there were these tall twins with thick-rimmed glasses (think Verizon wireless guy) with long hair pulled back into ponytails, long nails, and enough facial hair to be mistaken for old men. Seriously. They had mustaches and beards that I think grew to a few solid inches below their chins. And they loved anime. One of them stopped coming to school, but I hung out with the other during class and our anime club.

Let me know what you think about it. That’s on my roommate’s list of games for Christmas.

I guess that’s that. I assume that some sort of joke will be made about Boothe shooting Lincoln, etc. It WAS Boothe that did that… right? And now I see somebody else already brought this up. Hurray for 2nd place!

Last day of Senior Year, I held a spontaneous lecture in front of the entire class about High School cliques. I noticed my English teacher taking notes on it.

Reggie seems hard to draw face-on. It may have something to do with his abnormally large ego.

I know the suit guy, he’s in advertising…
and I’m the hat guy, haha

I stumbled in here today and have just finished reading all of your comic in about 2 hours i am truly a new fan of yours i love this book!!!! genius man pure genius, reminds me of when i worked retail except not so quick with the come backs LOL!

I LOVE Ed’s face in the first panel X3.

And that is a really interesting dream. I especially find it interesting since I am a rather…big boned gal named Tasha… 0.o

Yea it was John Wilkes Booth that shot Lincoln.

Haha.. this amuses me

It’s like seeing a train wreck in slow motion!

At my high school, it was half kicker (as in sh*t-kicker, FFA’s) and half freak (as in Fabulous Furry Freak Brothers). You might be able to estimate my age from those characterizations. Oh, yeah, I forgot the third half, the ones who were just trying to get through the institution with the least possible damage.

See, my high school was odd. The Nerd Herd ( as we saw fit to call ourselves) had representatives in all of the other social cliques. And we were the “popular kids” because we knew everyone and everyone knew us. It was a unique experience to say the least. Also, nondescript fat guys are the win! I belong to such a club and I must say, it’s rather enjoyable.

Lincoln and Boothe???
Did you do that on purpose?

I do everything on purpose, except the stuff I don’t.