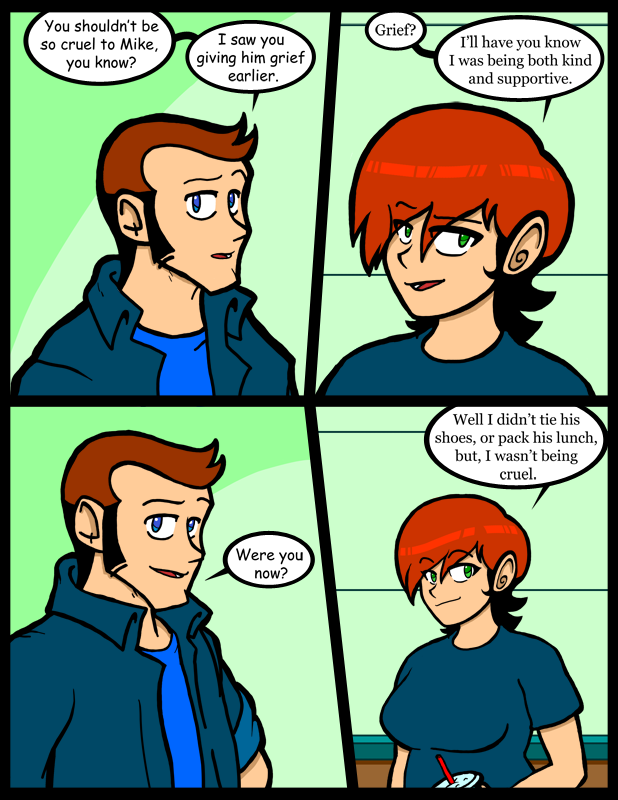 I had this dream where two friends and I were out doing stuff, and then ended up auditing classes at a college.  One of the guys was Rantark, but I don’t know if the other guy was someone I used to know or just a figment of my mind.  We decided to audit these classes after the figment guy got beaten up by an old dude, who was driving a golf cart, for picking up a collector coin the old dude had dropped in a convenience store.  We really weren’t auditing the classes what actually was happening was we were just saying we had permission to be there and the instructors just took our confidence as truth.  The figment guy wandered off to some random room and I went to a class about law.  I got bored after a bit and just as I was about to leave Rantark came in and got me.  He explained to the teacher that I was needed elsewhere then apologized and dragged me out of the room.  Once we were outside he told me I had to check out this class he was in.

The guy teaching the class looked a lot like that guy who sells oxi-clean, and it was apparently about forensic science.  It was dark and the instructor was showing slides about how he’d modified a human spinal chord into a fly fishing pole.  The spine-pole used the nervous system to zap small fish with bio-electricity.  It had a little red button on the handle that you pressed when you wanted to tase a fish that was on the line.  It would also shock nearby fish, and you could scoop them out with a net.  The vertebrae that made up the spine-pole were ground down like a length of PVC pipe and covered in vinyl so you couldn’t tell outwardly that the device was made of human parts.

I thought the class was gross and was going to go do something else but several people were trying to convince me to stay.  I asked why the class was called The Book Of Red and a girl told me it was because it was part of the criminal justice course.  That made sense to her but I didn’t see what that had to do with anything.  Then she told me that all the criminal justice students just called it C.A.D. for short.  When I asked why she said it was because those were the first letters of each of the words that made up Book Of Red.  I was like “shouldn’t it be B.O.R.?” and she looked at me like I was crazy.

The teacher was still talking about using spare human parts to make random devices, but he didn’t seem to care that we were all talking amongst ourselves.  Just before I woke up, I ended up talking to a girl who had been flirting with me.  She looked like a regular girl except she had green skin, dark green hair, and her clothes were all either purple or white.  While mulling over the dream I realized that the girl looked like she had been painted with the color palette they use for She-Hulk.

Wow I had some major part in your really freaky dream, now if i dream of it im going to haunt you for the rest of my life

She-Hulk is like *RAWR* so flirting with somebody painted using that palette is cool!

My dreams never have structure, just random colors, shapes, and sounds, they are never based in reality, even that bizzare dream reality. I wish that had that dream recorder thingy from Final Fantasy Spirits Within.

On the rare occasion I remember a dream, it’s usually one that incoherently changes settings at randome. I usually wake up when something imprtant or interesting is about to happen.

Been sick, needed to catch up a tad.

I wish I had your dreams.