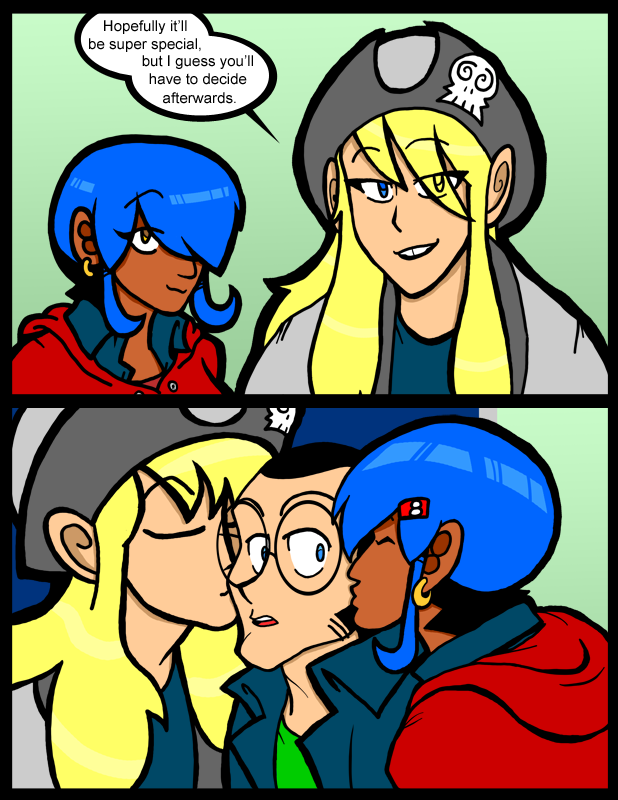 I’ve had some quality time with Mario Kart Wii, so I have findings to share with the general public. First of all, I’ve tried out all the available control methods. To that end, I have decided that the Wiimote and nunchuck are the winning team for me.  Waggleing the wand about when I want to trick boost works for me.  I don’t have to search for a button that way.  The Wiiwheel is a cute gimmick, but I can’t find a place for all of my digits. Maybe it’s just me. I just can’t seem to find a comfortable way to hold the wheel while still being able to make sweet love to the various buttons. The classic controller feels very natural, except for the trick button(s?). The Gamecube controller is, essentially, the same thing in an old package.The gameplay itself is pretty similar to the DS title, which I like. The new drift boost system is much less annoying though. I never liked the constant control masturbation that MKDS encouraged. I like the trick boosts too, even though the old tracks have so few places to use it.The thing that pisses me off about MK Wii is how overpowered the items seem. In MKDS you could get nailed by a blue shell and still pull off a win. I’ve been inches from the line several times on the Wii only to be buried by some random item. Once you take a hit your driver spends several agonizing moments screaming, and crying, like a little bitch. As the outside observer you are then forced to watch the entire field zoom past you. Even with a commanding lead you can go from 1st to 12th in a matter of seconds. It is… frustrating.

The new items are fine, for the most part. It’s not fun to be on the receiving end of a mega mushroom, but crushing your enemies with one is wildly entertaining. The one item I don’t like is the transfer cloud. Item boxes used to be filled with hope, but now the grim spectre of getting dicked over looms in their happy shadow. I understand that the weapon system is an integral part of the Mario Kart games, but would it be too much to ask for a no items mode? Even as an unlock after you’ve suffered through getting star rankings in all the grand prix races? I’d just like to see what it’s like to just get on the track and race. No bullshit. Just racing.

Anyway, Mario Kart Wii isn’t perfect but, as we all know, perfection is a myth. The game is still the most fun I’ve had with my Wii so far. That’s really saying something, considering it had to out fun Brawl. Maybe it would be in second place if my friends were around to play Brawl. I don’t know. All I know is that playing Smash Brothers online is a very pure form of suck, but that’s another post entirely.

Of course, zoomed out, it must look funny as hell, considering how short both Ed and Jolene are, and then are FREAKIN TALL Nina is, lol.

Hey, this is more a reply to the Mario Kart comment than the comic itself (newish reader, went through the archives the other day, and liked it). But yeah, I don’t know about the single player, but on VS mode you can click settings, and there are, I think, 3 settings for the weapons, 1 might turn them off, I’m not sure what all the settings are as my Wii is in another room though.

Ok….i agree with your comments about mario kart wii, but i’d have to say the most fun i’ve had on my wii is super mario galaxy. I completely beat it a couple of weeks ago, and now i’ve been working on metriod prime 3: corruption, and boom blox, which are both pretty fun. But mario galaxy ftw.

Donkey Kong got his own racing game. And it sucked hard core. And in my opinion, that makes Donkey Kong a dick head too. The only reason he gets invited to ANY mario events, is because him and Mario had it out for each other way back when. There’s no reason he has to invite his nephew or any of his retarded friends.

Oh my God! Too much to read!!! Plus the most advanced Nintendo system I personally own is the original NES.

I love Mario Kart Wii. But I do sympathize with the random item taking a win away from you. Basically me and my roommate called this “getting screwed”.

Anyways, love the comic. Just reading through archives at work while I should be working. Not even sure if you’re still writing on the thing. Or even if my comment will be read. So it goes..

Oh, man, Ed! He does not deserve to be that lucky. Why does everyone always love the hobbits? Is it the Harry Potter look, cuz I can go buy some dorky glasses if thats all it takes…

Ed’s got character, too. Any man with strength of character can become legend.

Haha, I’m pretty sure that’ll make him remember his the first day for the rest of his life, as Nina hoped. Lucky bastard, haha

lucky dude grats to him i bow to you

This is where Ed would like to say, “That was nice ladies. Now one more time, and much lower.”

and i’m with two women, make you take a second look

His life in comprised, almost entirely, of awesome.

Yep sideburns are definetely back. Here they be the female magnet of choice

So glad I have sideburns.

I went with fullblown mutton chops. They seem to work almost as well as sideburns…

What you mean “almost as well”?
The mutton is undefeatable.
It doubles as ID for purposes of proving adulthood.