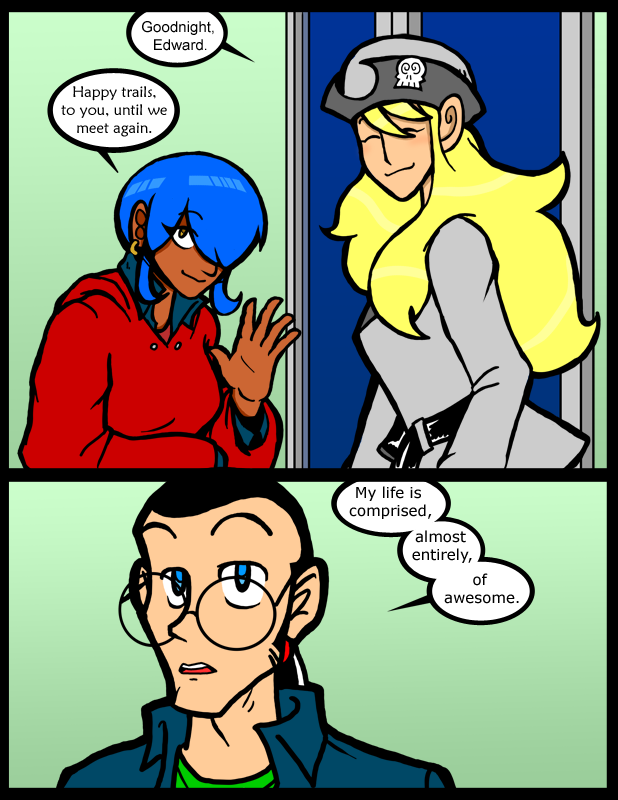 When I finally managed to get into a town that had Mario Kart Wii on the shelves I also decided to get a new DS game, to tide me over until the new Final Fantasy Tactics comes out. I almost got The World Ends With You, but decided against it because it’s probably really good, and far too engrossing. With my time at a premium right now I can’t afford to get sucked into a game that will keep me from wanting to complete comic pages. I had read a little bit about Pokemon Mystery Dungeon, and decided that it would be an acceptable alternative. Not too involved, yet interesting enough to keep me from worrying about my life in my free moments.Pokemon: MD is pretty simple. In fact, it’s the perfect amount of simple to suit my needs. You, and a pokemon friend, go into randomly generated dungeons and beat up other pokemon, which is a reward in, and of, itself. So far none of the dungeons have been unduly long, so you can pick it up and put it down whenever a free moment comes up. As previously stated, all the dungeons are generated randomly, every time you step inside, so it’s never the same crawl twice. There is a quick save in the dungeons, which is fine. I prefer a real save, but I understand that choice. The thing I find most interesting is the combat system. You can link moves together after a while and make some pretty strong combos. It kind of encourages you to try incorporating those moves you would never use in a regular pokemon game. Like you can string together a couple of attack moves, then end with a dodge move so that on the next turn the enemy has a lower chance at retaliating. Pete uses a focus move at the start of his move string to increase the likelihood of a critical hit, but there are lots of ways to combine moves. You can also recruit pokemon for some of the missions and train them in similar ways. I tend to over prepare for possible challenges, so every enemy I have faced has seemed pretty pathetic. I expect that if a person was charging through the story they would find themselves suitably challenged at every turn. Your character growth seems to match up with the pace of the game pretty well. Still, there have been a few moments when I faced an opponent with an unexpectedly hard strike. You lose your money and most of your items if you fail in a dungeon, so when things start to turn against you it gets a little tense. Of course, if you save often, you don’t have very far to backtrack if you decide to reset, rather than save, after a defeat.

A lot has been made of the Pokemon personality test at the start of the game. I have a feeling that a lot of people are going to end up as Chimchar though. I did the test several times, just to see how much your answers affect the choice, and ended up as Chimchar more often than anything else. Apparently, in my heart of hearts, I am a flaming monkey. I manipulated the test until I got to be a Squirtle though. Don’t get me wrong, I like flaming monkeys, but I wanted to play the game as a water type, and I like Squirtle best.

Anyway, Pokemon MD is a cheery distraction. If you’re a fan of all things Pokemon you probably won’t be disappointed with it.

That’s really one of those moments that you just…. savor!

I played the first rescue and … uh… what happened? Something… Oh.
My first pokemon was Squirtle. I was like, “Awesome!!!! :D” cuz I love Squirtle. But, I wanted to see what else I could be and I ended up a mudkip. Not knowing what the hell a mudkip was, I tried to get other things and succeeded in being some pink kitty thing and some more mudkips several times. Never again was there a Squirtle. I decided to leave well enough alone and be an evee when one came up.

no kidding about moments you savor, Taigan. Good lord. I remember my first double kiss, but it was uh … a little different *cough* NOTE TO TROLLS: no, it was not with men. Yes, they were both women.

My first and thus far only turned out to be a decoy so they could empty a tube of glitter in my face. Adding insult to injury, they then called me Cullen.

Best…day…ever! Although I have to say Ed had a great response to that.

Hahaha, his face is awesome, and the skewed glasses make a great affect. love the seperate speech bubbles too, gives you an exact sence of how he said that..

Oh man. My friends at work were telling me about this comic online, saying that it was eerily too much like our work. Oddly enough I agree with them. Every single employee at my work is someone in this comic (yay, I got to be Nina – down to the gap between my front teeth, to working in books, to trying to hook up employees). Funny stuff. Kudos!

P.S. We even have Happy Trails as our closing song haha