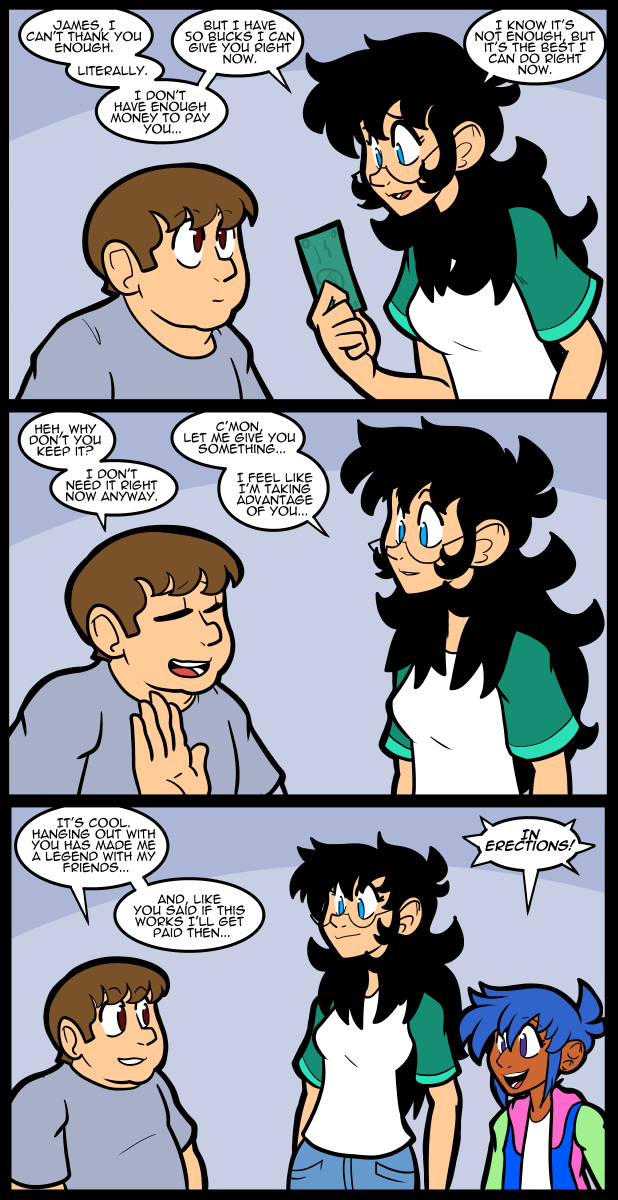 Every so often I get shit for Jess being a trope. (Pro tip: They all are.) She’s the hypersexual flirty bisexual girl. The thing is that in order to draw people in over time you paint in broad strokes at first, then start adding detail once people are paying attention. Which is why it is shown, several times over the course of the narrative, that she acts the way she does as a manipulation tactic. Which is probably the same reason the kind of people that caused the trope to come into being did as well. Maybe they wanted attention, maybe they wanted to feel special, or maybe they genuinely like being promiscuous. It doesn’t really matter. What matters is that there’s a code for storytelling almost hardwired into all humans. Which is why, in spite of vast cultural differences, a lot of stuff translates straight across. With Jess there’s also a layer of… I’m not even sure what to call it. Maybe hyperawareness because she can sort of be seen as a representative of an entire group of people with similar sexual proclivities. I’ve tried to make her a fully realized character, with more than one side to her personality. My favorite example of this is when she interacts with her professor. She’s very frank in her appraisal of her place in the world and doesn’t pretend not to understand what he’s saying the way she would with someone she doesn’t know very well. She knows that he knows she’s smarter than the average bear, so there’s no point in pretending. She’s worried about being who she is because she knows how people react to people who are very intelligent, so she coats herself in an armor of flippancy. People who’ve been here a long time will know that this is a theme that runs through the entire story. To one degree or another all the characters have different masks for different situations and they switch them as situations dictate.
To people who don’t know you you are a trope. You’re the girl with pink hair who probably has daddy issues, or is desperate for attention, or is a lesbian. You’re the Chad who gets all the pussy without any effort. You’re the fat dude who probably never tries to lose weight… the possibilities are legion, but they are always the first step to knowing who someone really is.

Someone once said to me: “So…, in high school- you were in the plays, and you were in some choir clubs, and you did some sports…..sounds like, you were one of the POPULAR kids!!”

If you had more than one relationship in high school you did better than me!

It’s all relative. I’ve found that you just need to be happy doing whatever you love in high school and you’ve done better than most people.

Heh. Yeah, I didn’t really have a big romance, back in high school.
To tell a tale, that was asked for by no-one:
In [one year?] in my 20s, there was a girl, who kept asking me to be her boyfriend.
I didn’t really want a girlfriend, right then.
But, she hung out with me and my friends, anyway.
After she + I had talked about [what she liked], for some weeks or months- she figured out: that she’d [rather do things that made her feel good], and hang out with friends, rather than have a boyfriend.
Wow. I’m [such] a heartthrob! :)

If you had ANY relationships in High School, you did better than me.

Thats…not really accurate. you had relationships. They just weren’t romantic in nature/friendly. Relationships aren’t always positive. I mean at the very least just by being a student you had a relationship with your teacher. Just saying, relationships are really broad things

It was weird for me because I once had a guy tell me I’m the oddity in my class at high school.

I played sports. Thus I fit into the “Jock” stereotype.

I was in concert band and choir. Thus I fit into the “Music Geek” stereotype.

I was one of the top 3 students in my class. Thus I fit into the “Brainiac” stereotype.

I was also in shop class and helping my dad on the farm. Thus I fit into the “Farmboy” stereotype.

And finally I played chess and talked about video games (mostly Atari and Intellivision games). Thus I fit into the “Nerd” stereotype.

So the … clique police, I guess … sent him to ask me what stereotype was I supposed to be, since I was spread out among too many stereotypes. Since I often fought back for nerds and music geeks while having a good time being part of a team and being top of my class, I told him plainly:

“Put me in the Go F**k Yourself group, because this is the dumbest conversation I’ve ever had.”

(Although later I thought about it, and realized it made me actually think about how people were treated because of the stupid cliques in my high school)

In high school, I was president of the student council because I didn’t say,” Not it!” fast enough. It was of course in name only, for the yearbook. They wanted me to attend homecoming-I “lettered” in quizbowl.(There wasn’t a chess club.)

I mean, I’d take that bribe!

At risk of rubbing you the wrong way, I’d say it was more rising to the bait than taking a bribe …

But it is hard to resist such a talented master baiter.

Talking to rowdy people, like Jess, can make me feel nervous.
Bribes like that, can leave me feeling stiff. :)

Tyer, you don’t want to rub him any way. That might a mess of this situation.

I think that Jess, can build a modest tower for Ja…[I can’t finish that pun!] XD

Saw a guy who built metal granaries who had an ad on his truck that said,”A perfect erection every time!” Told him he should put it on some of those floating key fobs that looked like a big blue pill.

Sometimes, you see car washing [shops] that are mostly- wash cars by hand…they put in their ads: “Come to Joe’s Car Wash, for the best handjobs in town”.
Good grief.

The classical term is “a bribe of the flesh.” ;)

An erection isn’t a payment, it’s more of a promise.

its kind of weird seeing that word come out of brooksies mouth, i kind of picture her as being a bit innocent but maybe thats her cute disguise at work, fooling me..

She has a history of saying dirty things people don’t expect her to.

That she does but wouldn’t this be just as, if not more than, unexpected yet apropos?

have you forgotten she is rather active sexually? Poly for sure. Being innocent doesn’t mean lacking in sexuality, people forget this.

I certainly wouldn’t count her as innocent in that case. Perhaps ‘naive’ though?

Kinda shitty that Brooksie just went along with Jo’s stringing along of the guy.

I thought so at first as well. I believe that Brooksie came to the realization that equitable payment would eventually reach James. So I think she might be fully on board now.

I have always maintained that expecting everyone you come across to be original by your own reckoning and experience is ludicrous. That worldview leads to toxic nostalgia, where you only care about the things that were new to YOU, and refuse to accept that anything that comes after could be better. It’s a viewpoint that refuses to let itself be challenged, that closes the mind.

I feel that if you’re going to judge creativity and originality, you need to judge it based on what the creator has done, instead, or what you’ve seen from them. Sure, what they made may have been made many times before… but that doesn’t mean it isn’t THEIR first time. For me, it encourages me to take a deeper look, and search for ways that deviate from the tropes.

In the case of Between Failures, what draws me in is the sense of awareness a lot of the characters have. Not just of themselves, but of what many of them represent and how they use these traits and the expectations they bring to their advantage or disadvantage. It may just be my impressions, but there’s a great deal of self-analysis at play that I can deeply respect. That’s why I’m still around after six years.

“Hypersexual” is something I don’t think is fair to say about Jess. She’s had a sexual relationship with exactly one person that we know of during the entire run so far: Jo. Is she flirty? Certainly, she flirts with everyone, but I’ve run into many girls who are like that, and at least as many guys. Things become tropes mostly because they’re true, or we perceive them as true, not because they’re cliche.

I think it’s kind of weird that “tropes” has filled in for the word “stereotype.” Considering how trope means the metaphorical of something (“this is like that”), and stereotype means the widely held but oversimplified image of a person or thing (“this is that”).

Typically, we stereotype everyone we meet, because it’s how we try to relate to them. Jock? Cheerleader? Nerd? Most people react differently to each of those stereotypes, and eventually as you get to know people at their center, your view of them changes (and thus you drop stereotypes and accept people for who they truly are).

One of the life lessons I’ve been taught over the years was: Never refuse money.

My family taught me to never take money from people if you didn’t earn it, which took years to get over because I always feel like I didn’t really earn it.

I would hate to only accept what I’m worth. I’d starve!

My family taught me to accept money if it’s offered which is a much more valuable lesson.

My people are a proud people.

So are we. We’re just also Scottish.

I would accept that in the sense of being willing to accept gratuity and gifts when they are given truly as a willing gift.
Often times people offer money when you did something out of your own generosity, and they do this because they are struggeling with receiving the gift of your time you gave, in these times I usually decline the offer.

Balance is important, being able to give as well as receive is something I struggle with. I find it easier to give, but feel awkward when I am receiving, but it is important to be willing to accept the giving of others, without guilt or feeling the need to repay a gift. If you have to repay a gift then it was not a gift.

I wonder if Jess would be offering him the cash if her an Joe didn’t have their talk before hand?

She’s actually offered to pay him part of what she owes more than once, so it’s hard to know for sure.