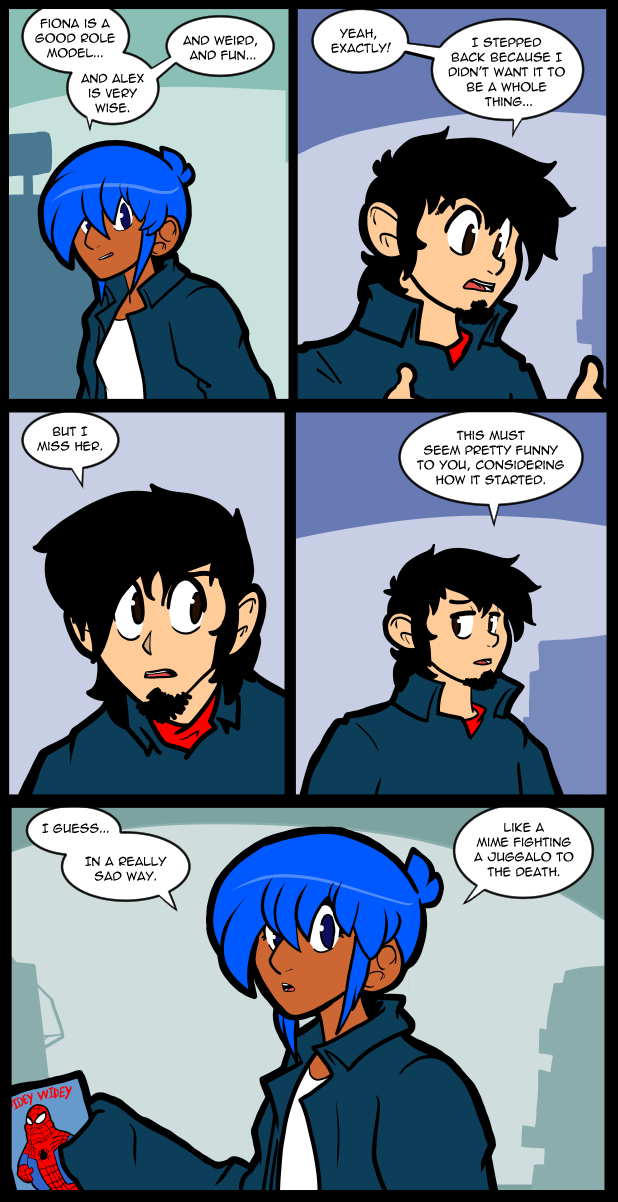 I remember when ICP started gaining popularity back in the 90s. It’s not the kind of thing I generally enjoy, but my views about them have softened over the years as their fans have become sort of a cultural meme. I sold many and Insane Clown Posse CD back in my retail days, but never met a juggalo in actual paint. Past me would have been immensely amused by it though. I’m pretty easily amused by the concept itself now, as evidenced by the punchline. It kind of makes me happy when people do cringey things in their sincere love of a hobby. People happily doing what they like, even when I’m not a part of it, makes me feel better about things.

You know the old saying, John; when one door closes, another one opens.

Well, for Alex, one certainly did.
Sometimes, when a door closes, you‘re just left standing in the hallway without underpants, having locked yourself out.

Under no circumstances should John be allowed to see Alex cosplaying Princess Dream Sweet. He’d be kicking himself over it even more.

A mime fighting a Juggalo to the death.

You can call him Spidey Widey all you want, but all I can think of thanks to that box art is Spider-Chungus.

“Spidey-Widey Versus the Wrath of the Big Chungus”.

That’s better than pretty much anything Marvel has released in the last, oh, ten years or so.

It’s probably better than anything they have planned for the next ten years.

If the mime and the juggalo were supporters of ideologies that I despise I hope they both have an unfavourable (Canadian spelling) outcome.

I also think that, all mimes want to-
if they can- find the jobs that they desire, + that they are able to become happy people in our community.

As the colleges have said on this subject:

“A mime is a terrible thing to waste”.

In the thread of mime vs Juggalo:

For those dudes who are under 18, who might get onto this site:

In my opinion- the linked goes to a music video, + some people might call the [fictional] fighting + bloodshed in the video- R-rated fighting + gore type stuff.

Just in case your parents don’t want you watching stuff like that.