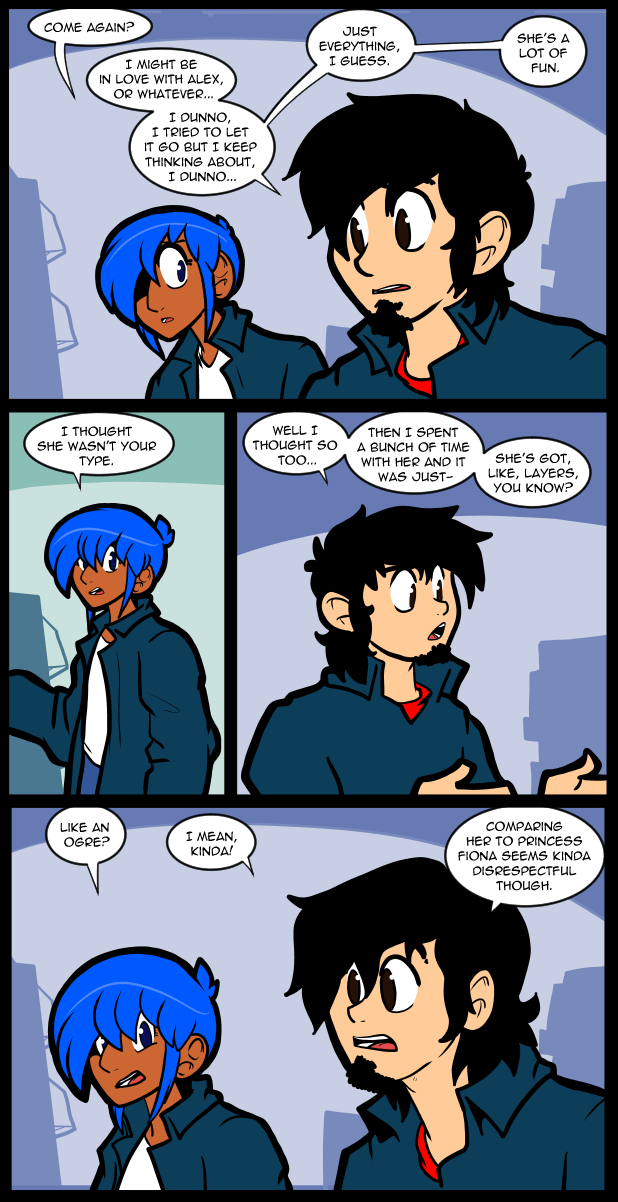 Honestly, Fiona has a lot of fans as an ogre. Maybe she’s not to everyone’s tastes, but she’s certainly a good match for Shrek. Things wouldn’t work very well if we all lied the same things anyway.

I’m glad some people like the same things though, like my comic, which you can support on Patreon or subscribestar. Sometimes, when the weight of the entire world isn’t riding on me, I even manage to update them with bonus content. Enticing, I know.

Did you mean:…if we all [liked] the same things?

It may have been a typo,but it’s true things wouldn’t work very well if we all lied the same. Mass delusion would result.

Uh oh.
I wonder if John + Reggie are gonna fight over Alex.

Ugh. Not gonna lie about this one. I hate love triangles. With a passion. An outdated trope from a bygone era of story-telling. I hate them because someone always gets hurt in these situations. I hope this doesn’t go beyond what’s been hinted here but that’s not up to me. If John tries eventually he can let go of what he feels as it’s not impossible. It’ll just take some effort is all.

They probably will, or Alex could date both of them. ?

I feel like John has already largely accepted that Reggie and Alex are a “couple” and that he has missed his chance with her. I think this conversation is mostly how “fun activity with friends” has turned into this whole ~thing~ with the others finding the body and the whole mystery about the hidden rooms, which he doesn’t really seem into as much as the whole “ghost story” stuff. Based on the conversation they were having before he also doesn’t seem like the type to try and “fight” for someone like that, especially if he thinks that person has already “chosen” someone else, doubly so if that may cause some kind of drama at work when he has finally gotten the promotion he has been wanting.

Tangent: I was already well into adulthood when Beauty and the Beast came out. I saw no particular added appeal in the lead male character’s appearance when he changed back into a human. As a beast I thought him more attractive.

I’m a straight male who considers himself a one on the Kinsey scale.

I agree. It’s a problem I have with most Disney princes: they look cardboard-made. The Beast may have improved in appearance (from a human point of view) when turned back to prince, but lost some of his personality in the process.

Still better than Sleeping Beauty’s prince, though. Besides being flat, he literally couldn’t go ten yards forward without the fairies help.

I’m trying to remember which of the Disney princes (up until ~1960) were rotoscoped. That really makes things weird with a rotoscoped human next to, say, the seven dwarfs, each of whom was animated to a fare-thee-well of effort.

(And it’s not just Disney back then. Fleischer’s Gulliver’s Travels is afflicted with the same issue.)

I don’t recall any of Disney’s animations being rotoscoped before Song of the South. Certainly not Snow White and the SevenDrwarves.

In fairness to Prince Philip, he was up against Maleficent. I would think ANYONE would need help against her.

Yeah.
There were a lot of doll collectors, + kids who buy dolls, who didn’t like what Disney did, with the dolls of Princess Merida.

Princess Merida is the red-haired hero, of the film, Brave.
In the film, Merida looks like, what most people call, an average woman, or at least, she has a body that looks like the body of- a lot of women in the US + the West.

As in- she’s not rail-thin like: snow white, Sleeping Beauty, Ariel, Jasmine, + the other, usual “Disney princesses”.

So, Merida looked like an everyday/usual woman, + not a woman who runs track for 4 hours a day, or a person who looks like a very thin, fashion model.

BUT…after the film comes out- [instead] of giving the Merida dolls the figure she had in the film, they just give her- the rail thin body of all the other “Disney princesses” dolls.

Come on, Disney- you could have made [the Merida dolls] look like a realistic person.

The Disney company really missed the boat on that one.

Not to mention her hair-a mess of red curls-which IIRC were made somewhat more Breck girl-ish for the doll.

John falling for Alex, not gonna lie did not see that one coming.

I love how Jo goes straight to Ogres instead of onions or cake.

That being said, I think John is infatuated with the idea that women are more than their looks, well some women. To quote Pulp Fiction, “Personality goes a long way.”

So Brook was oblivious to John’s feelings for her roommate? That’s why she encouraged Reggie to pursue Alex and Vice versa?

Well, John himself was largely oblivious to those feelings till it was to late – can’t blame Jo for not picking up on them

Yeah, I wouldn’t see a relationship working either if we lied the same things. It’s only a matter of time before your partner will see through your lies. :P

I’m not an ogrelover but I know a bunch of dudes who are hella fond of Fiona, so you’re not off

Believe me, I know all about the Fiona contingent.

I agree with John in the last panel.