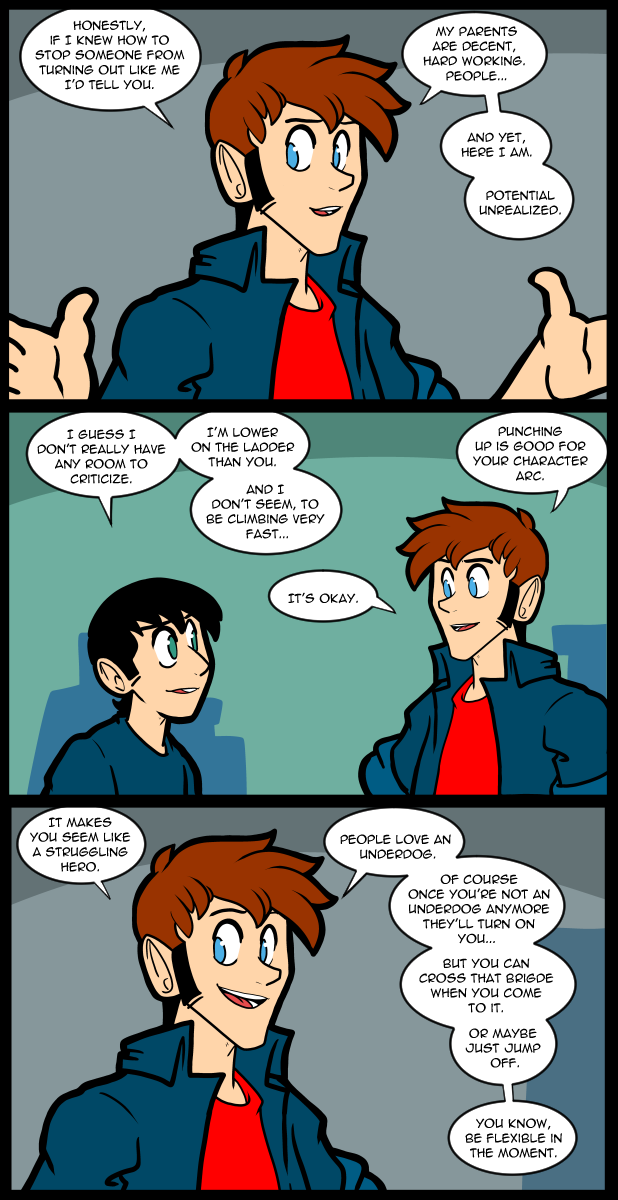 I’m going to type my blog inside the place where the links usually go. That way people will notice them instead of zoning them out. Here we have the patreon link. It’s for becoming a patron.
Patreon
And here we have the subscribestar link. It’s patreon for people who have ethical concerns about patreon. Fun!
Subscribestar
Topwebcomics is where you can vote for the comic to get it to appear higher in the rankings on that list site. I’m not sure how many people use these kinds of sites anymore, but the people who run it were nice enough to give me control of my account awhile back since it was abandoned by whoever actually made it originally.
Comic Vote
Reddit… I’m not sure what to say about reddit. It seems like a dangerous place to me. I just use it to look at porn and the subreddit that someone made for the comic. I’m not an active redditor.
Reddit
The wiki that got made at some point. I don’t think anything has been updated in a long time. I never made an account because the last thing I need to do it to catalog my own work rather than just making more of it.
Wiki
And there is the amazon wishlist I made for when people wanted to get me presents for the holiday times. Now I just leave it because I feel like after a decade and a half if someone wants to give me a random present at any time I’ve earned it. Some people disagree and hate that I might be shown appreciation very much. I don’t invite them to parties.
Presents List

Well, that was fun. I wonder if more people will notice those links today who never did before. On some level the construction of a website is an experiment in psychological manipulation. The best website designs don’t point it out, they just guide you to do what they want, like twitter, or even youtube. This site is pretty simple as it was designed by a simple man mostly. There are worse things in life than stating your goals in a straightforward manner though. My goal is to entertain and hopefully be rewarded for doing a good job. I think I’m doing okay in that regard. Always room for improvement, but things could be a lot worse. So, positive message overall.

Its good to see Reggie getting advice from Thomas. It makes you realize how far Reggie has come, from total antagonist to hero.

Every villain is the hero in their own story and every hero is the villain in somebody’s story. It’s a matter of perspective.

That being said, Reggie was never evil per say…

Well I tried the ‘LEGO Creator Expert Bookshop’ but I couldn’t figure out how to send it as a gift so an alternate option was picked.

I only put stuff on this list that it doesn’t matter if I get more than one of. That’s why it’s mostly LEGO sets. If something gets on that a person wouldn’t have need for two of then it’s usually just a mistake from accidentally hitting the add to list button while browsing.

“Potential Unrealized” is going to be the title of my book about living with ADHD before diagnoses were common.

He’s still young. Many people don’t “realize their potential” until later, when most of the competition has gone the way of all things.

Every report card ever. Not living up to potential. in my 40s a diagnosis for adhd. I may try to achieve something with all that potential. There’s still time right?

Alan Rickman took his first major acting gig when he was 40. Went on to be one of the most beloved actors of our age. I mean cancer got him, but he certainly had his moment to burn bright & that’s more than most get.

Wow, you complain as much everywhere. I’m surprised people are paying for that on Patreon.

They do, and it just burns you up doesn’t it? I can bitch and moan as much as I like and people empathize and commiserate.

Don’t listen to them. Some just can’t handle anyone else trying to live their best life, or being honest about their pain. We still like you. Thanks for your work.

I’m just on Patreon to pay fair compensation for a service that you’re providing. I don’t actually read your rants for the most part. ;)

I need access back into the discord. How do?

Contact me on twitter, patreon, Discord, or email. You have 24 hours from the time I see the message to use the link, or it expires. New members are no longer allowed in because people can’t get along anymore.

To show you the power of Flex Tape, I SAWED THIS BOAT IN HALF!!!