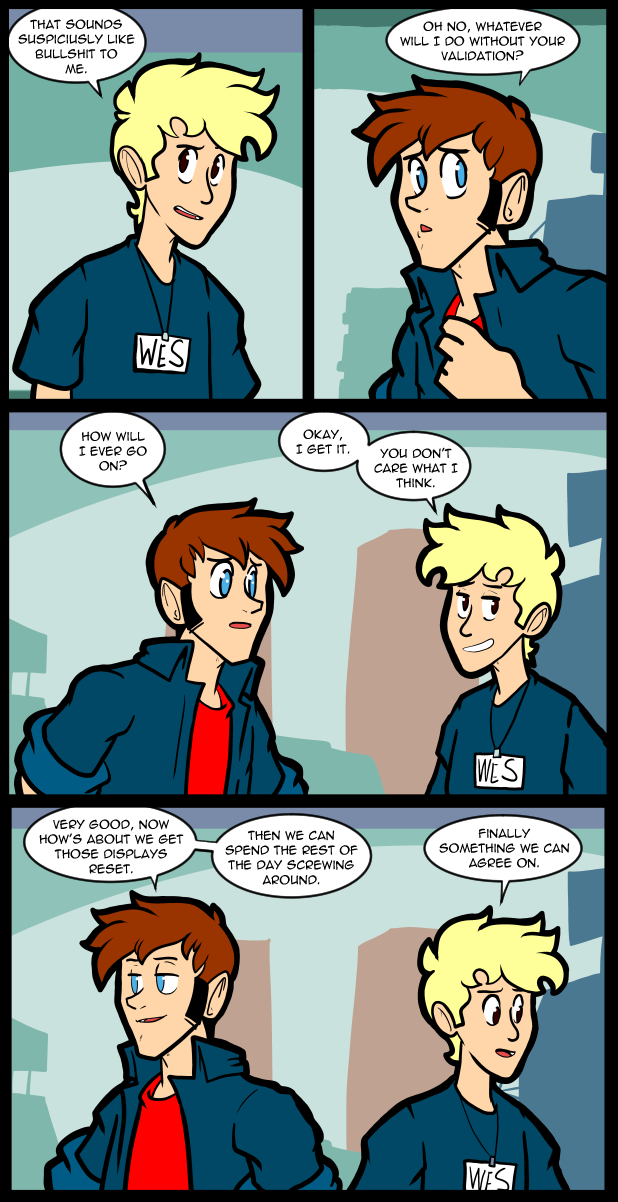 I may switch to doing some filler pages for a while after this page. I haven’t been able to keep up with things nearly as well as I had hoped. Grandpa has been in my care on and off since the funeral. Mom has had him part of the time at his house in kind of a week on week off basis, but she’s also trying to work out the paperwork for his extended care situation & it’s a big governmental clusterfuck, like everything to do with things they involve themselves in. I’ve had a couple of days where I couldn’t get to sleep at all & got dizzy to the point I was almost nonfunctional. Grandpa has this weird ability to sense when I fall asleep and he comes and pounds on my door like he’s dying. It’s fucking insane. He’ll sleep in his chair, or graze on the snacks I have for him all by himself, but as soon as I actually fall asleep for a second he dashes down the hall to wake me up. It startles me awake too, so it shoots my anxiety levels to the max level which I have trouble shutting down.
He’s also started wandering around a bit, so I need to remember to lock the doors and gates. It’s a new thing I’ve never seen him do before, which worries me. He was asking for his keys so he could drive home, which is also new. It would be a disaster if he decided to wander out of the gate. Not only would he get lost, but so would our dogs.
Anyway I’m having a really abnormally hard time focusing on things I need to do. What is it the kids call it now? Executive disfunction? I actually had to write this page 10 times, which is extremely abnormal for me. I can usually decide on something in two or three passes, even if I’m having trouble, but this just fell apart in my head over and over & I couldn’t get a handle on it. I’m not even thrilled with what I landed on, but at least I didn’t break a leg when I did.
Anyway, Patreon, subscribestar, paypal, are things to remind you about.

Wes actually realised he brought a knife to a gun fight. Does this mean I have to stop hating him?

Don’t Worry. There are plenty of other reasons to hate him.

Really, I think if you didn’t say that there will be filler pages, most people wouldn’t even notice. It’s a delight one way or another!

Am I wrong in wanting the filler pages with more sexy Nina action?

Because there’s also Jo and Jessica ;>

Please, dudes. let’s not quibble.
…There’s no reason we can’t have ALL THREE!

And if you just want the sexy, go find an uncensored version of World’s End Harem.

Your Grandpa has what’s called “Sundowner Syndrome”. My Dad had Vascular Dementia and it’s similar. They lose short term memory and begin remembering the past like it’s the present. Dad would say he was going to Tennessee to see his dad and brothers (long passed). We finally had to get a lockdown facility and take the keys as he could drive but would be lost and not know where he went and no money, place to stay etc would be dangerous. You need to engage help- call local Alzheimer’s group and get him assessed before you lose your life! Caregiver burnout is real. Too many die before the patient due to stress.

I get the feeling that Wes knows that the two are dating, and he is going to either use that info to attempt to blackmail Tom or just bypass that and try to get him and Carol fired. At least that’s how I’ve read this, like he’s fishing for info with Tom.

“Let’s reset these displays, so we can spend the rest of the day screwing around.”

Yep. That sounds like the retail stores that [ I ] worked in!
:D