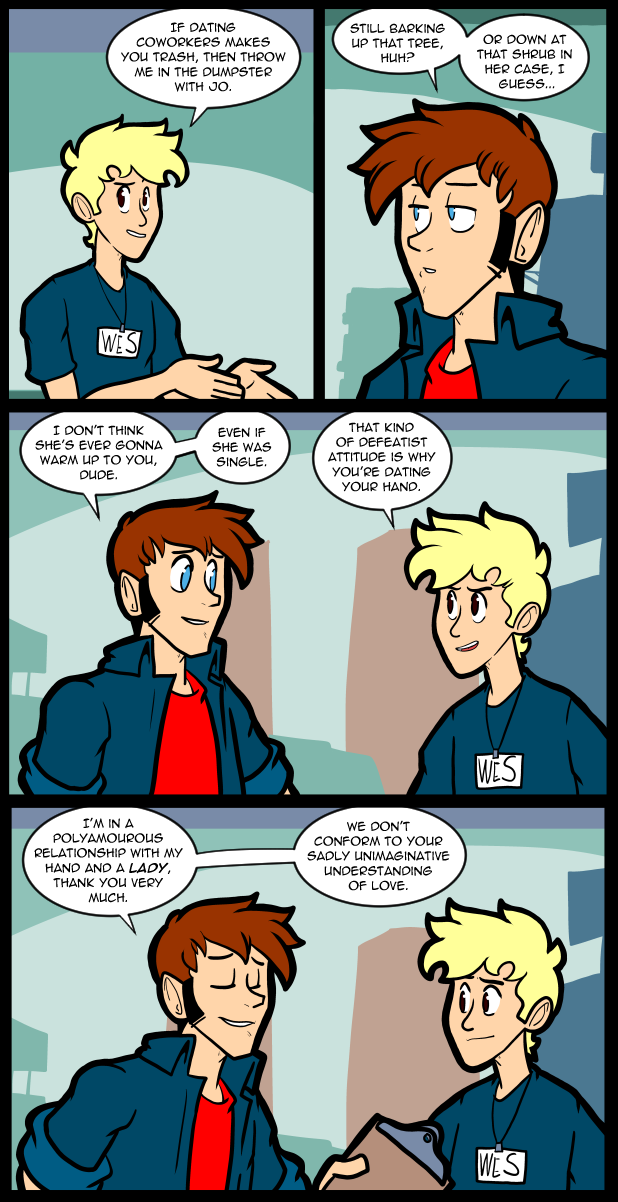 No need to read this. It’s not comic related. Patreon is, however, related if you’d like to support the comic. Links, as always, above.

Don’t say I didn’t warn you.

My internal chronometer is so ruined right now that I’m just kinda sleeping whenever I can and working when I’m not sleeping. Which is why this page is going up at just shy of 6 AM on Friday. I keep letting out little bits of extreme grief to, I guess, process this new version of reality. It’s not all that different than when either of my uncles passed. The repetitious stages of grief.
Watching my grandmother’s possessions get slowly carted away, knowing the house will be sold & that part of my life is over too is just a lot to deal with. Over the years I’ve tried to learn not to be sentimental about things. When I was little I couldn’t let go of birthday cards and stuff because I knew someday my grandparents would be gone & I would want something to have. A physical reminder of things. I didn’t throw away those cards until I was in my 20s & now I’m feeling like I made a terrible mistake. Then again, when I’m gone they’ll just be bits of paper, that no one else will have any connection to, that will just get thrown away anyway.
My grandparents lived in that house for all of my almost 46 years. I remember what it used to look like. Sleeping in the tiny room that used to be half of the living room on Christmas. How weird it was when they took out the wall and made the two rooms into one, but left part of the wall running across the room. Grandpa’s room used to be Jason’s bedroom, the upstairs used to be Mom & Jon’s rooms. I guess maybe Jon shared the bedroom with Jack. I was, like birth to 3 or so, so these memories are fuzzy.
The last time I saw Jon alive he was in the kitchen talking to mom. Trying to explain that he didn’t know how to get control of his life, except not being able to say it how he wanted, so he just rambled…
Christmases when it was Sara & I, then Alisha, Crissy, Lorena, Michael, Jake, Morgan, Jessica…
The bells that let us know it was officially Christmas.
Years without Jason, without Jon…
Fraggle Rock on the gigantic monolith of a television.
Staying an extra day because I cried so much Grandma & mom couldn’t bear to make me leave.
Tears upon tears.

No Thomas no! Don’t feed Wes’ trolling! Only bad can come of this.

This just reinforced my reaction to Wednesday’s comic, which was basically, “Seriously, Thomas, are you just trying to get fired?”

Take care of yourself, Jackie.

Thomas seems like the kind of guy who can pull off the (justifiably) smug smile and (not literal) pat on the head of Wes here.

I know all too well how unfair life is. The best you can do sometimes is to take care of yourself.

I miss the past as well. My grandparents have all been gone for a while, and now my parents are at that age where my sisters and I have to be ready to implement the “Plan” should something happen to one of them. It’s scary – I don’t know how I’ll deal with my mom passing. It’s a real fear my heart will break into pieces.

Sorry to hear what you’re going through, mate. Everyone above me in my family is dead, and those below ( except my immediate household-family ) or sideways live over in Europe. I have to be the rock holding everything together at all times, never letting on that sometimes I’d like to have someone above that I can vent or open up to. Gone are the mass family events that seemed so normal and eternal when I was a kid. You’ll get over this eventually, everyone has to take their turn at being the highest point in a family, even if they never feel up to it or it’s way too early. All the best.

While houses tend to be longer lived than people they too are ephemeral. The house I lived in until we moved when I was seventeen still stands. The house dates back to the 1890s and my family lived there from the 1950’s into the late 1970’s. The family still owns the land where it sits. I can walk into the house and point to the places where I slept and played but the emotional connection isn’t strong. After we moved the house was remodeled a couple of times and has set empty for about fifteen years. It has reached a point of stage four dilapidation and bears very little resemblance to my childhood memories. The two acres of trees behind the house died off a decade ago and most of the outbuildings are gone. The landmarks are long gone but hopefully the good memories last for as long as out minds hold out.

Ironically it’s the tears nów (sometimes many mány years later), that reminds us that it is (still) all worth remembering fondly. …Doesn’t make it ány easier though unfortunately. I wish you all the strength in the world Jackie, keep heart.

“…when I’m gone they’ll just be bits of paper, that no one else will have any connection to, that will just get thrown away anyway.”

But until then, they have value. Don’t denigrate that value: it would be a denigration of your self.

I’m going to share a story. Some may consider it disrespectful; move on if so, it’s a personal story and everybody handles things differently.

My grandmother was never a huge part of my life. She was, after all, the mother of my own mother, whom my father had divorced before I was old enough to really remember anything. Mostly I spent weekends over there while visiting my half brother, who was raised by my mother while I was raised by my father. My main memories were of her screaming about the messes we made and, at one point, threatening me with an X-Acto knife because I dared to wrinkle her bedspread while petting her cat.

Anyway, I didn’t spend any significant time with her until, I want to say 2009, when circumstances with the friends I’d been living with deteriorated and I needed a place to stay. I ended up helping take care of Grandma during the last stages of her life; she left us around 2011-12, I forget exactly when because my ability to store long term memory is sadly lacking due to brain stuff. Anywho, something that became a regularity was that I liked to deep fry stuff on the stove, and every time I did, Grandma would wander in and ask me to make some of whatever I was making for her, too. It became a routine.

When she passed, I was largely ambivalent. My mother and brother were inconsolable, so I ended up being the anchor for a while. I was never close to my grandma, as said, so it was fairly easy for me to compartmentalize the whole thing. It wasn’t that I didn’t care, but I’d never been attached to her.

So, about a month after her passing, life is finally getting back to a degree of normal. I just got a brand new deep fryer and I’m testing it out on some chicken strips. By instinct, I turn toward Grandma’s and begin to call out to ask if she wants any… and I stop myself. Right then and there, I started to cry, and I didn’t stop for a couple of hours.

All of this is to say that everyone grieves differently, and that it’s of the utmost importance to allow yourself to do so. Don’t feel like you shouldn’t, or that it’s bad for you to interrupt your routine to do so; you have to let it out, because one way or another it will come out on its own.

Its that kinda talk that caused the dating ban.
That and restraining orders between employees and accusations of….

I totally get the attachment to places. My paternal grandmother died in 1975, when I was 14, and her house was sold off. But till this day I will unfailably go and look at it, whenever I visit the town where she lived, and I’m sure I could still describe it in detail, with my grandmother’s furniture, although I haven’t seen it in almost 50 years.
A suggestion you might be able to use: My parents sold my childhood home some 10 years ago, as it had gotten too much to keep up with. But as they were talking about it for a couple of years before taking the plunge, I had plenty of time to photograph every corner of the house and the garden. Maybe you still have time to do that with your grandmother’s house (even if I understand that much of furnishments have already been removed).

I like the last panel.
Wes seems to be half-amused by What Tom is saying, + Wes has a, “Yeah…uh…whatever”…kind of look, on his face.

…is Jo even into men? I have it in my head she is, but I also recall she was estranged from her parents for being, her word, gay.

On one hand, Thomas is undoubtedly smarter than Wes and good at talking his way out of potential jams. On the other, Thomas is also fully aware of how smart he is and because of that, arrogant. Many a slip up (especially of the sitcom cliche variety) happen because of someone’s hubris.

Moving past that, make sure you take care of yourself, Jackie.