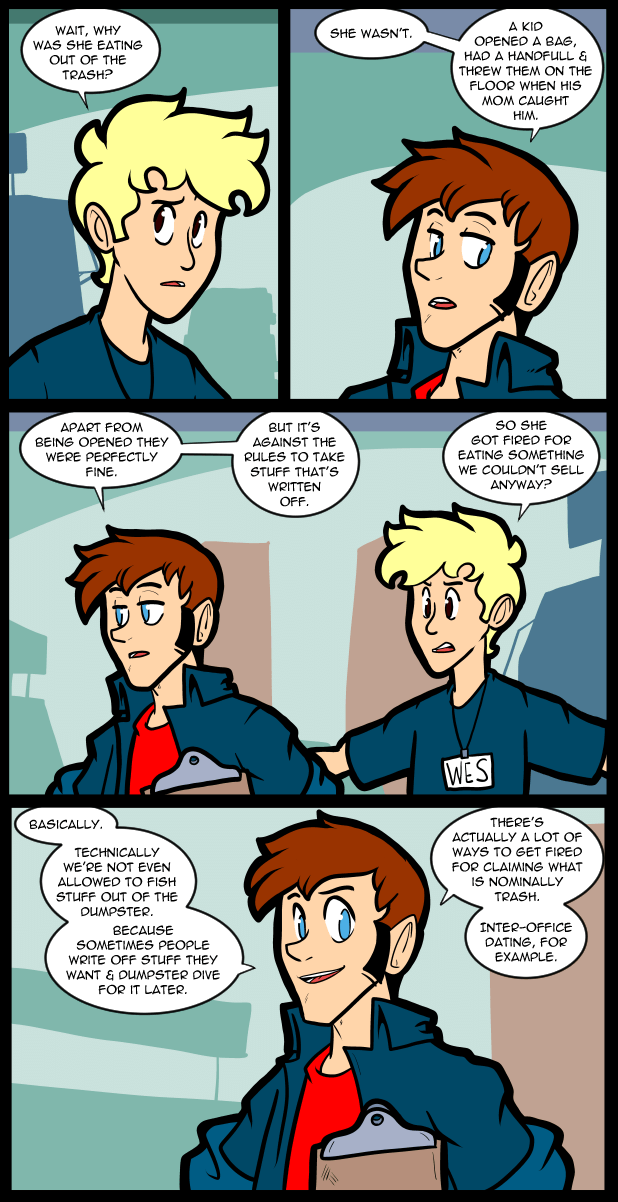 These rules exist for a reason. As Thomas mentions, if you structure things so that people are allowed to have damaged product people will often engineer situations that will allow then to benefit from “accidents”. The bulk of money lost from theft, or what they call shrinkage, in the biz, comes from employees. Loss prevention often starts by preventing loss internally. In every place I ever worked the biggest losses always came from staff. Unfortunately when you try to control loss from a great distance the methods tend to become more and more draconian because you can’t micromanage every situation. Big companies don’t trust their management all the way down to store level, and that’s probably wise. The store I worked for actually had two instances where almost the entire crew were working to steal thousands of dollars of merchandise as a team. I came in after that point and while I worked that never happened in no small part because, in spite of hating the company, I would still rat on anyone I caught acting shady to preserve my own job. I was certainly duped on more than one occasion, but no cabals of theft began while I was on the team. Only little parties. Anyway, the distrust between owners and staff has become a vicious cycle that I expect will never be repaired. If you don’t treat your staff well it makes them disloyal & management barely even thinks of employees as human these days.

On a more personal note, a few things from my life I want to make note of so they hopefully won’t be lost to me over time.

My grandfather’s last words to my grandmother were “Goodbye beautiful.”

Grandma fell onto a metal magazine rack on her way back to bed. Her legs had been giving out randomly & she refused to use a walker or a cane. The magazine rack was one she inherited from her mother. It ruptured a kidney, causing internal bleeding. In spite of the fact that her entire house was wired with cameras so we could keep an eye on her the camera that would have caught the actual moment of the accident shut off. The fall broke her collarbone and two ribs as well. She wasn’t wearing an alert necklace so she dragged herself to her chair before grandpa heard her. No one is sure who called 911.

Her bloodtype was O so they took several bags of blood with her to Wichita, but she didn’t lose much blood on the way. In surgery she did however. They didn’t sew her closed because they needed to go back in the next day to see if anything else was damaged that they missed. When they went back in 90% of both intestines had already died. At this point there was no saving her. Grandma was still aware, but could no longer speak. Those of us who couldn’t be there were all called to say our final goodbyes while she could still hear us and communicate via hand squeezes and eyebrow code. Which she had practiced from her time coming in and out of a coma. I’ve already related the story of my goodbye to grandma. After that the family members who were on hand settled in for the last ride. She was essentially being kept alive by medication to keep her blood pressure stable. She has always had a problem with maintaining her blood pressure in surgery and whatnot so once they drugs wore off it should have taken an estimated 6 minutes for her to die. She held on for a little over 30. She departed from this world on her own terms, which were the only ones she was ever willing to accept.

Each and every one of us has so many stories we could tell about her. My first memory as a sentient being is of being on the floorboard of her car, playing with a wind up crab toy. She’s not even in the memory, I just know she was driving. She took care of me while my mother finished high school. I wish I had taken the time to write down the stories she told me about the time before I was born because my memory isn’t as clear trying to retell it.
She was still quite young when I was going to be born and the idea that she could be a grandmother at that age was driving her nuts. She was a bit vain and I was kind of a symbol of the fact that she was, in fact, also aging. She stared having terrible headaches to the point that she went to the doctor over them. He told her that they were from the stress she was inflicting on herself over the whole affair. The doctor told her “That baby is going to be born, so you might as well accept it and start loving it now.” She did. The headaches stopped.
I don’t know when she started calling me Special Angel, but I don’t remember a time when she didn’t. She called me that from the first time I can remember talking to her till the last time we hugged as I left her house. I can barely tolerate the thought that I’ll never hear it again.

She loved all her grandchildren with all her heart but, as I told the other 8 of them as we stood 6 feet from her grave, she loved me just a little bit more. XD

Sounds like your grandma was a wonderful person Jackie, and she thought pretty highly of you too.
It sounds like she lived a good life (not that I’d ever truly know), but I’m sorry for your loss. I lost my grandmother recently, and it still burns, but good memories shared with family I found helped, and I hope you can feel better eventually too.

Sounds like you can still write the stories she used to tell you before memories deteriorate further.
Use speculative language when your memories aren’t clear. Admit the unclarity. That way you’ll still be honest and might record details others could perhaps confirm, deny, or be vague about.

So sorry for your loss, Jackie. May her memory always be a blessing.

Now 3 years ago, almost to the day, I lost a very good friend (to leukemia, after more than a year of treatments). You simply háve to go one with your life (as best you can) of course, if only to try to keep his memory alive at least, but that doesn’t mean it doesn’t still hurts (a lot). At the time of his death he was (just a few days short of) 48 years of age. …My heart still bleeds for his mother (who lost his dad to cancer only 5 or 6 years before), he was her only child. 3 years later I’m still in regular contact (mostly by telephone, thanks to distance and corona) with his mum, feeling it’s the last thing I can keep doing for him. Besides all the years he was part of my life I’m also still véry grateful I got to say goodbye to him in our last telephone call just 2 days before his death. I at least got the chance to thanks him for his friendship, a last nice (sort of) memory of talking to him to cherish.

Loss is part of life, but it is a sad part. My heart goes out to you and your family. I’m older, so I have already lost all my older relations. The stories from and about them are the gifts you give the next generation. My granddaughter hears stories about my grandparents every single day. Embrace the pain knowing it will pass, treasure the memories and pass them on. Try (although I do not think I ever succeeded) to be the person they saw when they looked at you, or at least to see your self the way they saw you.

Is Thomas just trying to get fired here? ’cause that’s some serious tempting of fate right there.

I can’t even try to console you about your grandmother, because I’m not the kind to be able to be more than a solid base to lean on in those situations, so I won’t. I am curious about the comic though. Is Thomas talking about intra-office, like he and Carol, or is that meant as written. Or does he mean intra-office, but just used common parlance and I’m being a pedantic dick. I have a hard time telling anymore.

It is memories like that we cherish the most about a departed loved one, especially one that was as close to you as your grandmother. Being just another random Internet person, I am in absolutely no position to tell you what or how to feel, but it is clear, from your stories, that she cared for you.

When my grandfather passed nearly 11 years ago, I was more or less in the same boat. He was a man that liked silence, but it was a welcoming silence. He enjoyed having family around, especially at Christmas, but all the hullabaloo would soon overwhelm him and he would step outside under the verandah or in his shed, and sit, or work on something. He loved me and my sister, because of all the grandkids we didn’t really run around all that much. We understood that Nannu (Maltese for grandfather) wanted to chill, and we’d sit with him. Sometimes he’d talk to us, or tell us a story of his past, or ask us questions about things. I still miss that, even now.

When he died, my dad gave me one piece of advice (paraphrasing here, but still): don’t mourn that he died, but be happy that he lived. What I make of it is that memories like that, you being her “special angel”, instead of their absence being a source of sadness, should be a source of comfort because of the fact they happened.

I’m sorry for your loss, but you seem to be finding some happiness in your memories and you got to say goodbye which is sometimes all we can hope for.

Hoo boy, way to give Wes potential blackmail material for the future. Of course, Tom and Carol may just elect to resign to stay together.

I noted he said INTER, and not INTRA.
Nice save Thomas.

That was the intent.

I noted he said INTER, and not INTRA.
Nice save Thomas.

Hey Jackie, are you alright?
Not seeing a new comic strip today (yet) has me a little worried.

I think it’s safe to say I’m not okay, but I’m not in immediate danger. I’ve just been having trouble keeping up with everything and managing my daily life. The new page is being finished right now. It’ll be up in a couple of hours. Sorry to worry you.