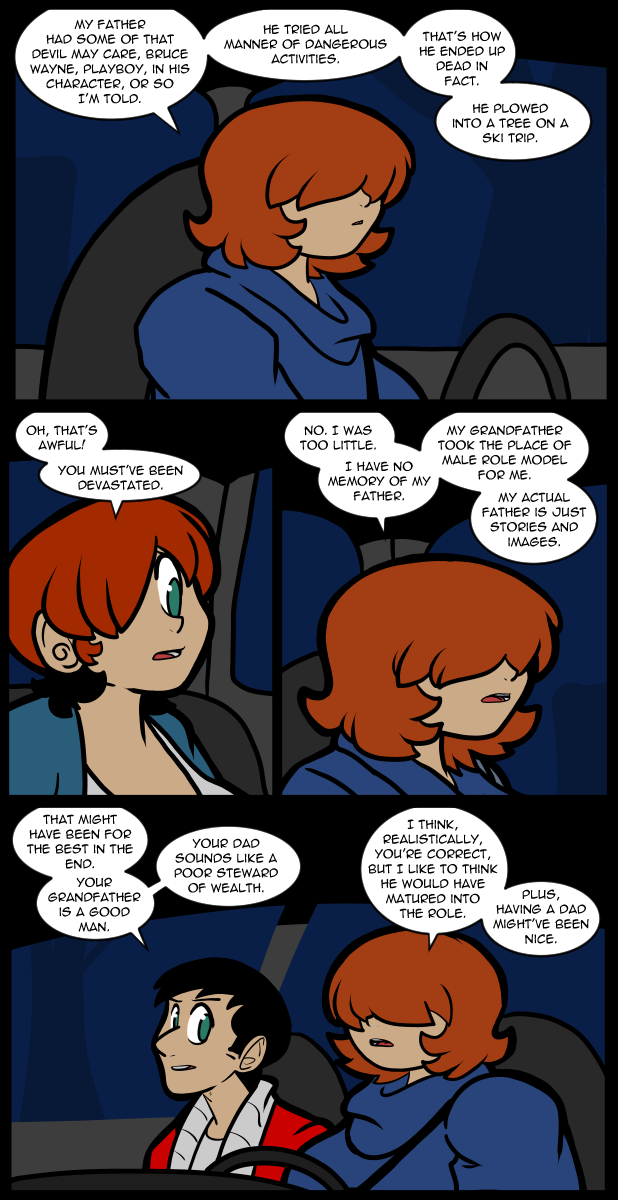 Reggie and Alex seem to have an almost resonant tendency to frame things with an emotionless pragmatism. Realistic to a degree that’s almost unsettling. The more they have scenes with each other the more this seems to come out in them. It’s kind of amusing. To me anyway.

Tomorrow my nephew is visiting for Christmas. He’s old enough now to understand the concept that I am a collector of things. Additionally the cultural shift towards never growing up means that I share interests with a… 5(?) year old. Not something I’m proud of, but the fact of the matter is that Minecraft keeps being fun year upon year as do Lego sets based on said franchise, and this is the reality of human life now. We never really have to give up childish things, we just add responsibility to the list of things we have to deal with. I’ve seen many people with a handful of children lamenting having no time to play video games & that’s just normal now. Is it good, is it bad, honestly, I don’t think anything much matters anymore. Just living as best you can is enough as long as you don’t ruin someone else’s attempts to do the same. Regardless, I’m setting up a table so my nephew can see my big boy Minecraft Legos. Chances are he’ll be bored with them instantly because anything you spend time doing for a child is always ignored for random crap. I’m going to do it anyway though.

If a child manages to get bored with Lego, that’s not a child. That’s a body snatcher. Science.

Lego never actually appealed to me all that much, I always preferred more narrative endeavors than constructive ones in my creative play, as such playsets that didn’t require me to build them first held more appeal, and the lego sets that were just bricks and not part of a playset always kinda bored me after a bit, because the blank slate of “I could build anything” generally resulted in me building nothing, meanwhile I felt that a lego playset was kinda defeating the purpose of either a playset or a lego set, since what’s the point of legos if you can only build one thing with them, and if I wanted to play with a playset why waste hours building one brick by brick when prebuilt ones already exist.

I mean, I totally get why legos appeal to other people (now, anyway, at the time I think it felt rather alien to me), but I just never really got anything out of it.

Also, I found that legos were ill-equipped for building the things I actually wanted to play with, like swords and action figures, and the minifigs that were intended to be used with lego sets always seemed kinda dinky to me, like even as a little kid I could carry like 5 of them in one hand fairly easily, but the action figures I wanted to play with were big enough that I could *maybe* get my hand around one.

I had a terrible time building tanks. Even lining up the wheel parts made horrible treads.

My problem with legos was that there were never enough of them. I predate Logo kits by a couple of decades. Now I just play with my grand kids legos on the pretext of playing with the kids.

To build action figures (actually robots) you needed to get the technic lego sets. Then you can have working joints and other cool stuff. I was big into legos as a kid. It scratched the itch of wanting to build things.

As an adult I’ve learned that still indulging in kid stuff from time to time is ok when you still do everything your have to as an adult. There are too many adults these days that don’t even do what is required of them and yet they claim to be adults…

I kinda agree with you, and kinda don’t. Sets that had parts which were very specific didn’t appeal to me for that reason, almost the same as things like model airplanes where you make them and then they just…sit there…but other sets I would build, and then start modifying with my piles of parts, or putting up another set next to it and warring with them AND my other toys. Caribbean pirates, allied with the Ninja Turtles, invading space stations guarded by Transformers that turn into animals instead of vehicles, is the kind of cool that we didn’t otherwise get until indie game devs came around. In fact, I’m not sure how often I actually constructed a set to the letter; I usually got bored once the general structure was up and started doing things my way. On the other hand, I can’t quite get into Minecraft for the same reason neither of us liked just random lego blocks to work with–with infinite options, I just shrug. There’s like a sweet middle ground that I think we see in video games now with RNG, procedurally generated content, rogue-likes, and so on, that didn’t used to exist much.

That said, not a single kid in my extended family does legos…

I can understand Alex not being emotionally demonstrative seeing the family members she’s lost.

Also, as Thomas said, still waters (run deep). Not showing isn’t not feeling for some people (like myself).

You never truly grow up. There’s a limit to how mature most people are to an extent.

Example: my grandfather, the farmer. He liked board games as a kid. Before he passed away, I realized that, and I started bringing over board games to play. It was like playing with a teenager all over again.

His favorite games were Lords of Waterdeep and those with bluffing mechanics. “I never should have stopped playing games,” he told me, “I probably would have been a nicer person if I hadn’t.”

I have a mantra quite similar to “Just living as best you can is enough as long as you don’t ruin someone else’s attempts to do the same.” that basically works as my moral core, so it was really nice to see someone else write that out

That used to be a guiding principle in America.