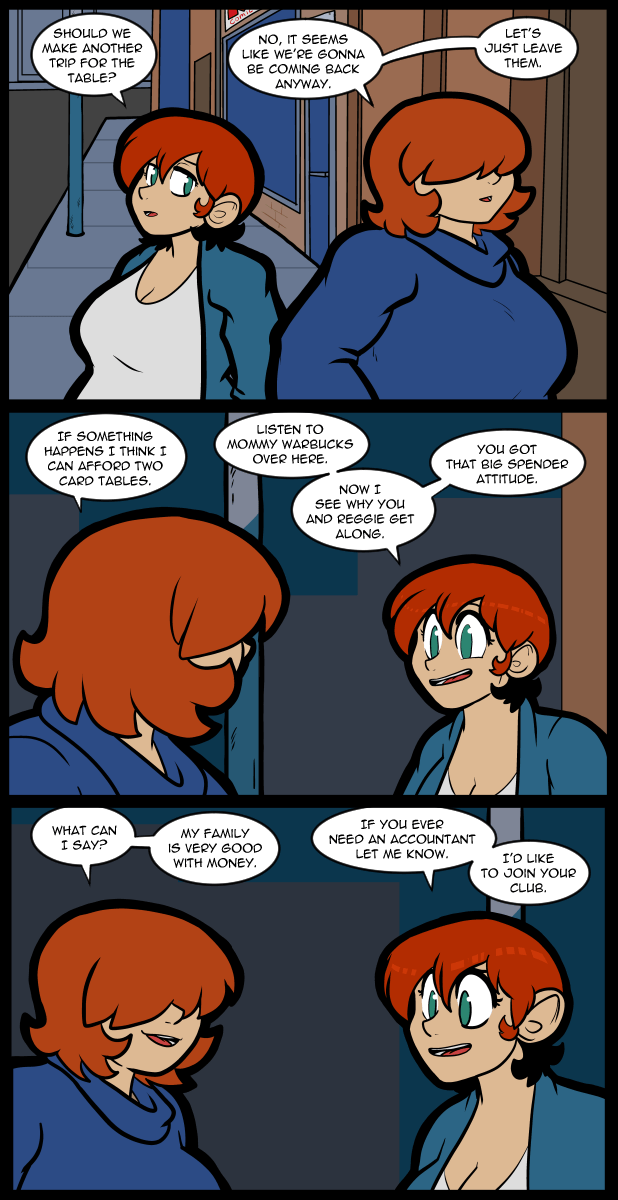 Carol makes a reference to Daddy Warbucks from Annie on this page & it made me wonder if Annie is still culturally relevant enough for most people to understand. It technically didn’t end till 2010, but I couldn’t tell you a single person who I knew who was reading it. It gets mentioned in A Christmas Story, so in theory some child might want an explanation of what Little Orphan Annie is since it’s such a big deal in that movie, which plays all day on TBS on Christmas at the time of tis writing.
As someone who was interested in the history of cartooning & eventually made it a career, I have a working knowledge of many of the ancient comic strips from the days when you could become recognized around the world by getting your work in newspapers. So I’m not a good judge of what constitutes general knowledge on the subject. Peanuts, Popeye, Garfield, Calvin & Hobbes, Far Side, Dilbert, Beetle Baily, Dagwood, Funky Winkerbean, Boondocks, & Bloom County are some titles I think you cans till safely assume people will know of. Although Dilbert more for the outspoken political beliefs of the creator much more than the actual comic now. Garfield is the most omnipresent of those. What I believe to be the last newspaper comic that made its creator a millionaire. The decentralized nature of media in the modern age has reduced the potential for a creator to gain worldwide renown to a degree that makes me believe that it won’t ever happen again. Homestuck, for example, was a phenomenal success, but outside the internet it’s basically unknown. Even mainstream comics like Superman, or Spiderman, are known more for the movies than the actual comics at this point. My page got more views per month than the sales of most comic books the last time I checked, with only the top 20 or so having higher sales than my view count. The landscape is very different these days.
I probably won’t ever become a millionaire with my work, but you can get me closer via patereon of subscribestar if you feel like supporting the comic. I may never reach the cultural relevance of Oliver Warbucks, but that doesn’t mean I shouldn’t try. XD

I know about Annie (I was in an Annie play in middle school), but I bet most people don’t. Still, “Warbucks” is such a rich-person name it makes sense even without context.

Wait, Little Orphan Annie was a comic strip? I feel like I’m not that young myself a lot of the time, but I only knew it from various musicals or at least musical adjacent films over the years and/or as a play.

Though the last adaptation changed Oliver Warbucks to William Stacks, so people who only know the 2014 modernized adaptation might have needed the explanation.

Changing ‘Warbucks’ to ‘Stacks’ sounds like bowdlerization to me.

Dude Bloom County is awesome. Bill the cat and opus. Some of the crazy stuff bill has gotten up to would make some of the craziest people in Hollywood look sane.

Well, like everything else, it has been rebooted, remixed and re-adapted a few times in the last almost century. A lot of folks may not know the original, but, I think they know OF it enough to get the pop culture reference in the grand scheme of things.

I am older than Jackie, and I remember Jiggs and Maggie being in the newspaper when I was a kid. That strip seemed forever perserved in the amber of the 1920s and 30s.

Funky Winterbean … isnt SUPER well-known hasn’t been for a couple of decades.

There are groups dedicated to cataloging it’s misery.

Anyone else remember Felix the Cat? Though I remember him more for cartoons on TV and not as a comic strip.

Wish I could find a few more of those comics. The book I found had only about 20 of them.

True story: When I was 15 (mid 80s) we got our first VCR. We went to the video store to rent movies. Mom was walking down an aisle and suddenly stopped.

So she gets it. We go home and plug it in. About 10 minutes later…

“I don’t think this is the same Fritz”.

She’d misremembered Felix. Fritz is an X-rated cartoon (that was apparently filed in the cartoon section of the video store by mistake).

We did finish watching it, so the first X-rated film I ever saw was with my folks.

Finally Carol gets to make use of her accountancy degree. Well, sort of.

Some of those old comics just lingered on a zombies. The originals often had some bite, often in the form of social commentary (Daddy Warbucks was a WWI war profiteer). After their originators died or retired they were popular enough to keep running but they just devolved into inoffensive, gag-a-day pap.

I remember a goodly portion of the aforementioned in today’s post by the author. Most but not all. I also did see Annie as a kid back in the 80’s. Carol Burnett had a role in that film as the head of the orphanage I believe. In terms of striking gold (success) with comics in today’s world there are doubts as to that happening. Woke culture is essentially destroying any possibility of that happening again.

I read occasional Annie comics back in the 50’s, but my reading ability in newly-learned English wasn’t sufficiently advanced to appreciate it. I remembef one episode in which she was finding her way out of a maze with some kind of ray that showed otherwise invisible arrows on the wall. I have wondered for decades since what the rest of the story was. Anyone know the context? Or even (can I hope) scans of those original strips?

If you are in the USA, the US libraries’, Inter Library Loan system can be used your town library. Your town’s/area’s library might or should be able to borrow the books + let you borrow + read them.
If you’re outside of the USA, your nation may have a system like the Inter Library Loan system…to help you borrow these books, (Or- goodreads [dot] com lists stores + online stores, like amazon [dot] com, where you can buy these books.

Here’s a link to goodreads [dot] com, where goodreads lists these books:

The comics you mention may be generally known in the US, but not all of them have made it to worldwide fame. I’m a Danish comic fan, reading what I could get hold of since the mid-sixties (OK, the first couple of years of that period I had to have my parents read them to me), but I’d never heard of Funky Winkerbean or Boondocks, and far as I can tell they’ve never been published in Danish. As to Bloom County it only ran for a short period (less than a year) in one newspaper, and people who didn’t read that newspaper during that period have probably never heard of it. Finally, Popeye and Dagwood are pretty much forgotten by now and probably unknown to people who are much younger than me. On the other hand, a similar list from a Danish reader would certainly contain a number of Franco-Belgian comics, like Tintin, Spirou and Asterix.

I was surprised to discover Dagwood is still running.

Is that the one called Blondie?

As an American reader I discovered Tintin as a small child in the late 60’s and I can still enjoy it today. I was a precocious reader and was aware of Asterix but never really got into it.

The Ethnography of Webcomics is going to have a very neat volume on Between Failures, when it’s written in 600 years.

Especially if the comments survive. Sometimes Jackie’s blog entries are the most interesting things on the page. Sometimes the comic. It’ll shed light on life in ancient times. Probably more light than the histories of politics and conquests.

School history told me a lot about who fought who and who was a brave hero (on “our” side), but almost nothing about the lives of ordinary people.

Writing in just to give some idea of how demographics play out. Was born in the early 90s, and am from Canada. I’m familiar with Peanuts, Garfield, Calvin & Hobbes, and Dilbert. I know Popeye as well, but did not realize it was a newspaper comic, knowing it only for the animation. The name Dagwood is familiar, but I can’t recall how/why, meanwhile Boondocks I only know as the western anime, and am unaware if there’s any association. Beetle Baily, Funky Winkerbean, and Bloom County are completely unheard of titles for me.

That’s still half of the titles you predicted would be known, but evidently some will still be lost as you go younger and younger, and further outside of your locale

Katzenjammer Kids? Little Lulu? Betty Boop? You little whippersnappers! Why, back in my day….. I never really had a day. Just realizing that now. Ahhh, nostalgia-tryin to decide if I need whiskey or Prozac. (maybe if I mixed em’….back soon..probably….)

Ketzenjammer kids? I encounterd them in Captain and the kids. Back then I still found reading difficult in my new language (English), but I remember a few strips in which some kind of device gave some kind of access into another world. Anybody know any more about that?

Most people in my generation would recognize Annie/Warbucks from the 1982 musical with Carol Burnett and Tim Curry.

Once I was into my teens my favoutite comic was Pogo. I had a number of Pogo books, which I can no longer find.

And here’s a classic that’s mentioned as a seminal strip in histories of comics, Dreams of the Rarebit Fiend. Although I don’t know if Dreams was really “seminal,” or it’s just a last surviving relic of the early 20th century, so historians have seized on it as an important comic. But if you’re into Surrealism it’s fun.

The Katzenjammer Kids is the longest running comic strip, running weekly since 1897.

Gasoline Alley is the oldest daily, running since 1918.

I’ve never actually seen an Annie comic strip, though I was aware of the existence of it and its dead-eyed protagonist. But Little Orphan Annie has had at least a couple of movies, one of them fairly recent, and it’s a school musical standard. I somehow managed to avoid having to be in it when my 6th-grade class put it on, but the songs still haunt my nightmares.