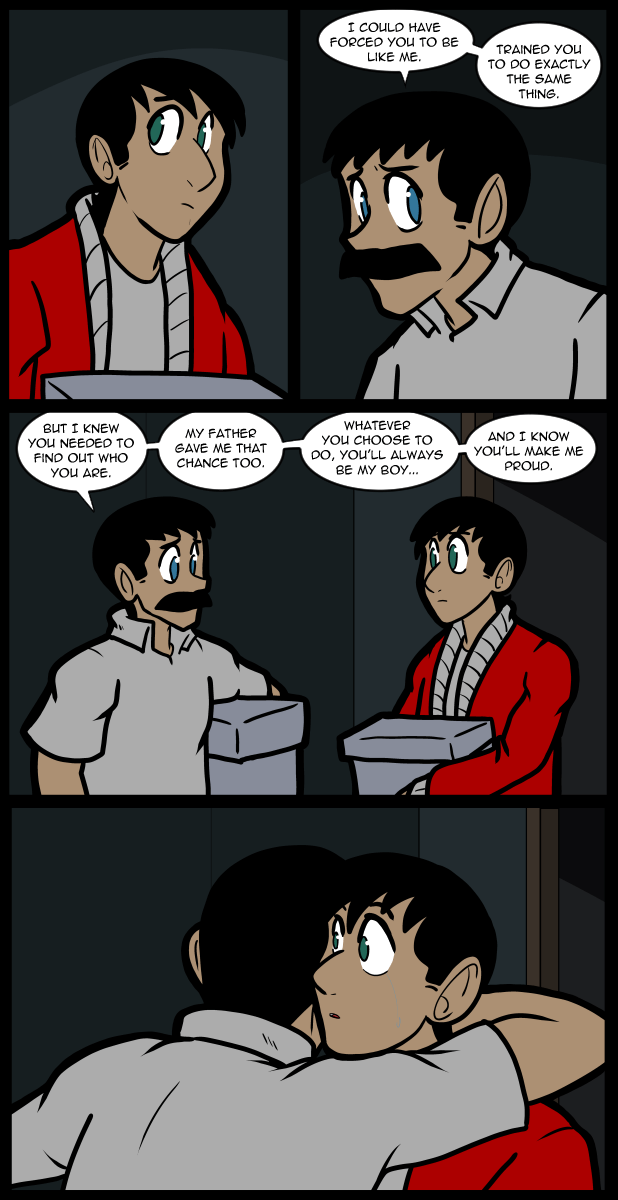 On the emocean, the waves can be rough.

It was at this moment that Reggie knew he was wrong about his dad this entire time.

Do…do you have cancer?

Even if it did, I could actually stick the landing.

Ha ha! yeah I bet you could

Well, damn, Jackie, I guess YOU can control the weather because it seems to be raining localized entirely on my face.

That last panel expression is master level work. People are going to read many things into it. I see shock, vulnerability, and a little fear.

4 stars, would read again. Okay, I just read it again.

Does… The dad doesn’t have an illness, does he?

When my Dad spontaneously hugged me as he was leaving Tucson to fly back to Ireland, I was momentarily terrified.

Turns out I had good reason. He died halfway back.

I also want to express my sympathy at this news. I am glad you had a chance to say goodbye.

It was the wrong goodbye. There’s a difference between goodbye before a trip and goodbye forever. Of course any goodbye could end up being forever because life is uncertain.

Jackie, I think I’ve been reading BF for about a decade at this point, give or take. It’s been surreal to see Reggie’s father, given that he’s only been mentioned in passing. But the fact that you made me emotionally connect to him so quickly is astounding. You are a fantastic storyteller.

How early did you have this panel planned out?

Emoceans can move you in unexpected ways and you can need support when navigating them.
You can also show support by signing up to Patreon and/or subscribestar.

I had to make one up. I miss these segues.

A fine one, though.

According to Pinker, in How the Mind Works (I think that’s the title), emotions are tne top-level directives in charge of all our rational behaviour.

No wonder they affect us.

No wonder they have an effect on us.

While the noun for the verb ‘affect’ is ‘effect’, there is also a noin ‘affect’ referring to a kind of expressed emotional state.

Is there some kind of etymological relationship between tnese words? There’s even a verb ‘effect’ that means yet something else!

My friends kept recommending your comic to me for years. Bout 3 years ago I read it and binged it in one sitting. Needless to say I was hooked and look forward to each update as they come out. This arc definitely touched a few spots in life where I had issues with family both alive and passed on. Thank you my dude, for continuing to make such a wonderful series worth tuning into regularly.

Other web comics I read for entertainment. Yours I read to feel things. I have never been brought to tears by any web comic but between failures. This is a masterful level of storytelling. Which I cannot thank you enough for.
`ulrich

Hopefully at this point Reg will finally put aside that attitude problem of his and be more of a respectable person. I think this the perfect opportunity to have him grow as a person for the better. There is only so much ego people can take.

When I get my gamestonk tendies I would pay to animate this series. Full creative control to Mr Jackie but I would foot the bill.

I look forward to the day.

I’m nursing my dad through COVID right now, and thinking about my son.

You can’t really train a child to end up just like you. I’m sure my dad both wanted that result and tried for it. Didn’t even remotely stick.

It’s also very natural to want to be like you dad. Only works out sometimes.

Papa was forced out of graduate school when the Nazis closed the universities in the Netherlands and roumded up all the students. Fortunately Papa wasn’t yet formally enrolled because he hadn’t yet been able to pay tuition, so he escaped the round-up.

Years later, I turned in the direction of mathematics, and he taught me, informally. I think he was quite proud of me going on to get my Phd. In math, his chosen subject.

Someone once said I was likely to become on of the 50 top mathematicians in Canada. But that never happened. I also had attention deficit. Yes, kt’s a real thing. I think that ultimately crippled my career.

So I was lucky that following my dad worked out. I had a formal view of reality that carried me through the abstractions of math.

My brother was not so lucky. He did not fit my father’s mold, and always had severe fights with him. He also had attention deficit, even more severe than me, and it killed him. Sometimes forgetting to do something is dangerous.

Man.
I didn’t notice it because of the dark lighting-effect, in this scene.

…There’s something on Reggie’s face.

That subtle tear track down Reggie’s face was a really nice touch. Getting me with all the feels over here.

My father passed away in June. Since then, I’ve been breaking down at random things like episodes of series we both loved. Jackie, this page ruined me for a solid 10 minutes as I just sat here crying. I felt every word of this conversation between Reggie and his dad, as it mirrors a conversation my dad and I had verbatim. You’re a creator of superlative skill. Thank you for this.