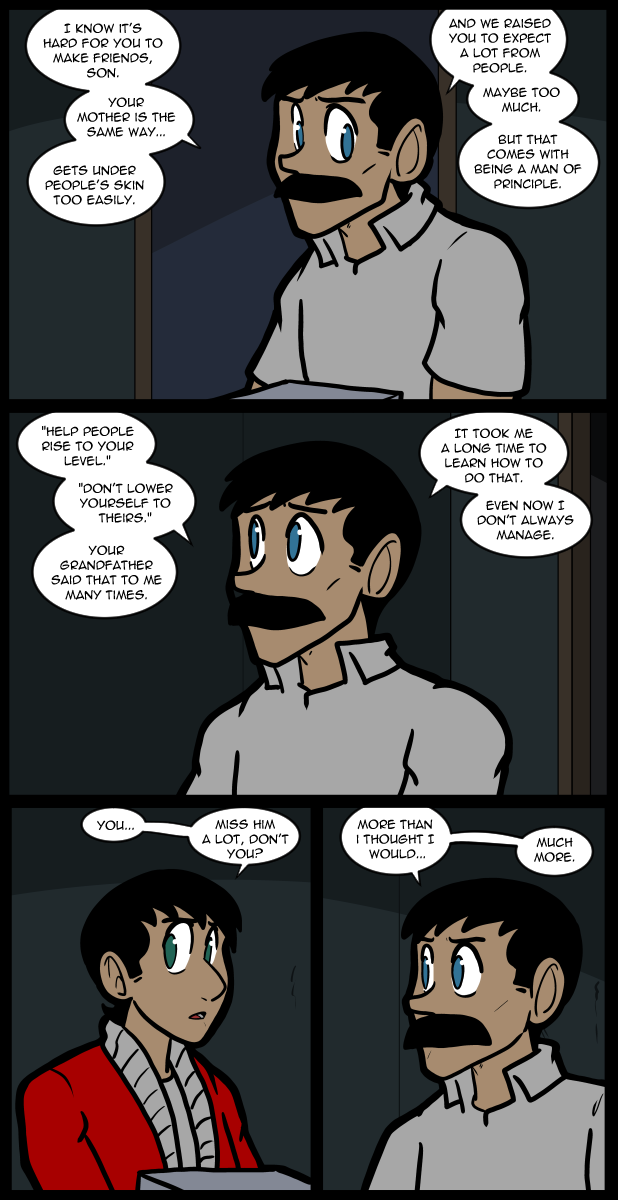 I’ve gotten into the bad habit of not turning off audio when I go to type these things. Someone talking right into your ears disrupts your ability to think & mine is already impaired at the moment. It just happens that stopping the noise has started to feel like I’m not doing something I could be while doing something that shouldn’t require all my attention. It’s a false feeling brought on by constantly having things I need to be doing, but it still gets in my mind. I should be beyond having to remind myself to focus on important things, but apparently I’m not. At least I still have sense enough to realize when I should do it.

I bought new glasses a while back. The experience wasn’t very good. I let it slide because I don’t like making a fuss & everyone is under a lot of stress with the covid. I’ve been wearing the new glasses for all that time since & they weren’t quite right. But I’m getting old enough that some degradation of my sight should be expected so I thought maybe this is how things should be. Today I decided it wasn’t. I didn’t buy new frames & I kept my old lenses, so I put them back in. In a matter of moments I went from feeling sleepy and unfocused to feeling just generally better. My eyes weren’t tired. I still need new glasses, but I also need to find a better eye doctor to get them from. So that’s something I’ll be doing… eventually. I now have the perspective of terrible glasses so my older slightly wrong ones don’t seem nearly as bad as they did previously.

Anyway, glasses cost money. Maybe become a patron if you like my work so I can buy another pair.

That mustache is emoting so hard xD

Definitely a Moustache of Consequence.

A Mustache of Principle. It expects a lot from its follicles. Maybe too much.

Maybe more than it should.

Not every comic has to end with a comedy punchline.

That’s something I appreciate about this comic — the ones that don’t end with punch lines.

I bought a new pair of glasses earlier this year. Thankfully, the place I bought them from had a satisfaction guarantee, because I had to stop wearing them within a week, and get a different set. (Nobody explained when I was picking out frames that their bifocals had some weird hour-glass pattern to them, and that I’d have NOTHING to help my peripheral vision. I’d rather have two separate sets of spectacles.)

If the “a while back” hasn’t been too long for you, it might be worth taking them back, asking for a correction to your corrective lenses.

All bifocals without a line will be some kind of hourglass shape, but every manufacturer has several levels of quality, and higher levels offer wider and wider fields of vision. They will all have distortion off to the sides to some degree though, although the better lenses will give you a really wide field of view in the distance and push all that distortion into the lower corners. It’s nice having a lens that will let you see far, near, and everything in between, but for dedicated close work, it’s definitely nicer to have a second set of glasses solely for that.

And it might be the manufacturer of the lenses, and not the eye doctor, that’s at fault.

I can’t work in utter silence, myself. Gotta have some music or something running…

I like a little white noise myself but the radio is just too distracting these days. Love the name though, I always wanted Matt Mason stuff way more than GI Joe.

If you get your eye exam done in an eye doctor’s office, you can take your prescription details and look for glasses online. I use GlassesUSA. They’re cheap and are constantly running discounts and clearance sales.

Reminds me about the one and only time I went to Walmart Optical.. I have an astigmatism so I have to have prisms in my lenses. Ordered a new set of glasses and when they came in I felt like I was two inches tall.. the ground under my feet was in such sharp focus and the rest of the world was blurry. After a week of this I took the glasses back.. Turns out they cut the lenses upside down.

I haven’t been able to see since I got my bi-focals. And like many of my peers, I have to take my glasses off if I want to see detail (like, to read).

I just wanted to let you know, these two things have nothing to do with each other. Also, it’s not “an astigmatism”, as that’s sort of like saying you have “a diabetes”–it’s just “I have astigmatism”. Not trying to correct you to be annoying, I just want to help make sure you understand what you’re buying, because I know many people in the field barely understand what they are selling; prism has no relation to astigmatism correction, you can have either one without the other.

Just now became a patron, and wish I could contribute a little more. (Financially, I can… but Patreon doesn’t seem to offer that option.)

“Help people rise to your level, don’t lower yourself to theirs” sounds like great advice until you realize that like 90% of the people who believe in it are idiots who likely don’t realize that they’re the ones who need to rise up…

No the advice is sound. It just needs to be paired with always strive for excellence in yourself first.
Aka get the speck out of your own eye before inter cranial surgery to remove a plank.

The advice is good I agree. But its not easy. And you also have to try and be good yourself.

Well Jackie, I can’t offer much, but if you ever visit Denver, I can hook you up with good glasses. And I can happily answer any questions you might have about them, or glasses in general. It’s what I do for a living and I’ve enjoyed it for the past 14 years. It’s possible your doctor messed up, or the people who made them, or perhaps age is making it so that you have to choose between good distance clarity or good near vision without switching glasses (or a bifocal). Considering your job, honestly, you’d probably be well served by a separate pair just for near work either way.

Sorry to post twice, I forgot to actually comment on the comic. It’s a good lesson. But it’s also a lonely one. People see you as a stick in the mud, and don’t particularly want to hang around you or invite you to parties…but they sure as heck come to see you as someone they can rely on when all of those other fair-weather “friends” vanish when it hits the fan. Ironically, the more people lower themselves down to the common denominator, the more enticing it is to do so, because there are fewer and fewer people rising above that to meet and get to know. This seems especially true with mainstream culture today, where people want to work the bare minimum just so they can save up to party in one way or another; most folks seem to live that way until their mid-30’s at least, when they FINALLY start to consider it “good” to have pride and investment in their work, to save for the future, or to invest in other people, and then they have to try and unlearn 15+ years of bad habits. Or to put it another away, people put off growing up for a very long time when society lets them.

This is one incredibly well written scene. I’d go so far as to say it feels like it was taken from first hand experience rather than creative inspiration.