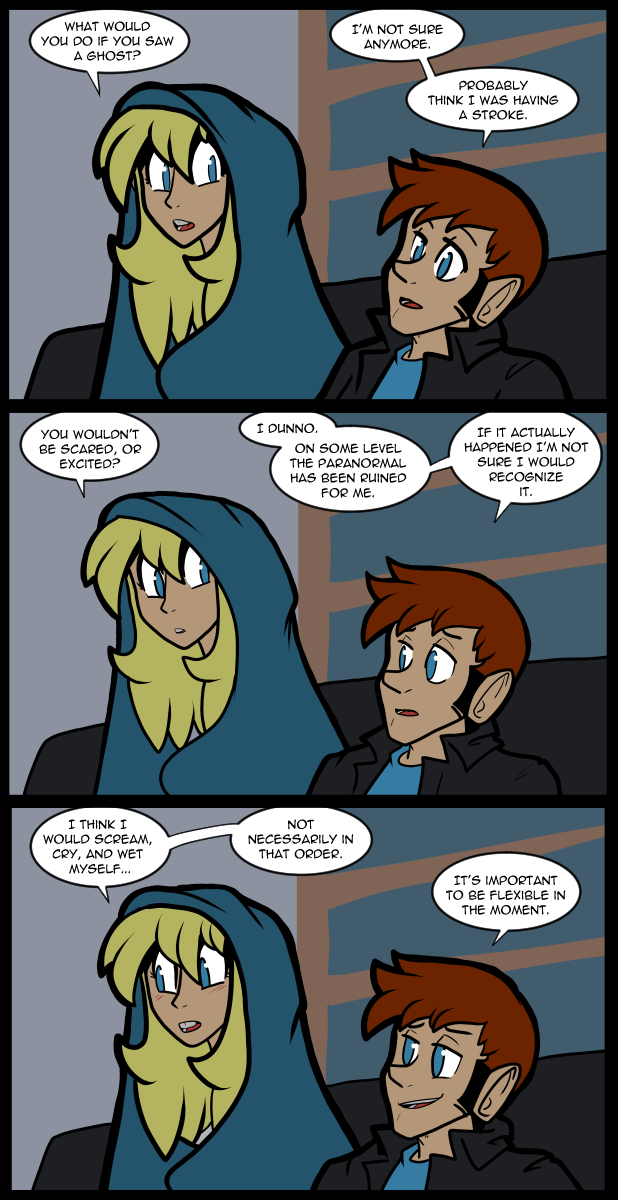 I’ve been having some problems which caused me to miss my regular posting time. I apologize for not holding up my end of our contract. I won’t promise it won’t happen again, but I will try to avoid it, god willing. I sort of post on a schedule out of a habit formed from the early days of the webcomic. It used to be very important to have your work up at a specific time. I don’t know if it is anymore. I’m so far removed from the so called “community” I don’t actually know if anyone cares. Most people I started with have moved on to ruining pop culture, while I’m still here trying to hold back the waves of misery everyone else seems to gleefully inflict on every franchise. I guess I just had different priorities…

That’s why we luv ya!

The resistance to such things is why your fans remain loyal.

Great comic, as always.
I can confirm there are at least some of us who still care. Personally, I’m less worried about the late post (the timing in general) as that you were able to do it.
Your comic is a comfort to me, as it has lifted my spirits in a lot of cases where I needed said lifting over the years. By extension, you being well is also important to me. At a basic level, no Jackie, no comic. But, then, I’ve come to see you as a person that I like to know is still around and still in well enough health, new post or no new post, because you’re one of the people that seems to care enough to share the things that make everyone else smile and forget themselves for a moment. Knowing that someone like you exists is a comfort in itself.
Hopefully, this comes across the way I intend, and sends the message that you’re a cool person in my eyes, and that the comic being posted has become the bonus to knowing you’re there, rather than the other way around. At least, it has for me. You may not share content in the personality-forward way that “influencers” use, but my opinion is that you’re a great influence, and you do it old-school.
As an aside, calling a web-comic old school makes me feel old. If it does anyone else, I apologize. :sweat_smile:

For breach of contract I’m going to invoke the penalties clause. This apparently consists of just sitting, waiting patiently for the update, and then posting a message reassuring you Jackie that I’m just thankful you’re sharing your work at all. A consistent posting schedule can be a good work motivator for productivity (much like the open source mantra ‘release early, release often’), it’s also important to know that you are beholden to noone if it affects your health. On the other hand, studies have shown that retired people live longer happier retirements if they have the perception that they are needed for something. Extrapolating that along the arm of my chair, it should imply that people who perceive themselves as needed, useful or relied upon in someway are more fulfilled. So maybe that means my reply should have more, “Lucy, you have some ‘splainin’ to do,” to it. Put a little pressure on, even though from a moral stand-point you owe me nothing, maybe it’s good for you to feel _a little bit_ like you do. Heck, I know that would benefit my kids if I could get more of that to drag my (adjective censored for negative self-talk) ass into doing more for them.

As a personal thing, Ooh Nina. I’d say I wish I could meet someone with her personality. But even without the ghosts, if I actually did meet someone I’d just cry and wet myself. (Or as I just learned, I’d just say “oh shit”, panic, then run to the bathroom and consider deleting the dating app before replying and instead come here to check on my precious comix and try and ignore the problem I just created)

You could go full Miura Kentaro and post once every planet alignment and I wouldn’t appreciate what you do any less.

Which is to say that health and life definitely come before the posting time, though I can’t say I’ve ever felt like a new page not going live at a specific time of the day has really ever mattered to me anyways, and well even beyond that most of the other webcomics I still enjoy tend to have delays that push them off schedule by up to several days that are announced in advance anyways.

Breathe. You are amazing and awesome. You are appreciated. Whatever is going on, so be it.

My first thought when I saw that Monday’s comic this morning was “I hope Jackie’s okay.”

Not put off by the delay, man! This comic has been a staple for me for so many years now that I don’t even recall when I started reading it. :-)

I’m glad to see the comic, at whatever time! When it wasn’t up in the morning I was worried something bad had happened to you :(

the quality of your content and writing is always great, and that’s what is most important. Deadlines can be fudged around, life happens.

Dude. No. Do NOT apologize for missing posting TIMES. If you’re here on the right DAY, that’s more than sufficient. Do you have any idea how many comics go on unannounced hiatuses? You’re more than pulling your weight.

At this point in my life I don’t feel like sitting at the keyboard until 12:00:01 in an effort to claim “First!” in the comments section. I’m here for the story.
As for ghosts, I’ve been to and even worked in places that once could legitimately expect to see a ghost. Several of these places had the reputation of being haunted. Sadly, I got nuthin’. Same for UFOs. Still, one continues to hope.

Personally I’ve never understood this ‘Oh, we MUST see the comic the very moment it’s posted, and so we need to know when that is to the minute and second’. But then, I read a buttload of webcomics, so it would be impossible to do such a thing for all of them. I check my comics for uploads in the late afternoon/early evening – since I live in the Central European timezone, I can expect most North American comics to have updated by then. But if they have not, I’ll just check again tomorrow.

I look at it as a sense of fandom entitlement which in my view, can really ruin the image of the fandom. While I get the gist of wanting to see the next part ASAP, it’s not an excuse to be a whiny crybaby about it, especially when the author doesn’t realistically owe you. It’s bad enough that the anime fandom has already fallen to this disease.

I appreciate your work ethic and wish to encourage it. But wish to discourage your self-destructive recriminations for not making a deadline. Not sure how to do it. I kick myself when I feel I’ve failed too and I know saying “don’t do that”…even though you shouldn’t do that…doesn’t help. Thank you for not ruining your comic.

I wouldn’t worry about it too much personally. I like to hit the daily updates of all the webcomics I follow all at once, so with one of them posting at 11am my time on MonWedFri, that results in me generally not checking my followed comics until early afternoon, by which point yours is up for several hours regardless of if you’re a little late or not

Of course, if you’re really concerned, it wouldn’t hurt to look at the average time that comments start coming in to figure out when the most active viewerbase tunes in

You are worried about missing your posting time?? Dude, hitting your posting day without fail is impressive enough, and you have one of the best posting records in webcomics. Lets not get too worked up about a few minutes (or hours).

I’ve just put a book to market, and I am concerned about the “waves of misery” the world is about to subject me to.

Life happens. Anyone who doesn’t understand the RARE delay you run into doing an update needs to pull their head out of their rear and find some empathy.

Having met a couple of ghosts in the past, they don’t particularly bother me…

Only seen one, and it rattled my nerves no end. Saw it four times on four consecutive years, once each year…. I don’t go there any more.

Where are the f————g pictures?

I’ve tried to fill in the four blanks above, and all I’ve come up with are frying and flying.

I use an RSS feeder, so it would take me more like a week to notice that you’d stopped posting. Unannounced hiatuses of months’ duration, on the other hand, are a sign that a webcomic is dying. I don’t think that I’ve ever seen one come back from a 6 month or longer hiatus, announced or not, without sputtering out a handful of strips then falling silent permanently.

The idea of never coming back from the trench of filth I am wallowing in at this time was depressing enough that I went to check in on some comics that at one time fit your description. As it stands, some remain slow but persistent, and others have resumed a regular update schedule including a buffer. So evidently there are options for the author that are not subject to maarvarq’s hypothesis.

life happens. part of the problem with modern society is that its constantly demanding perfection without giving anything in return. sooner or later it will catch up with us then it will be one giant clusterf@#$.

While I’m sure a lot of us readers like that there is a specific time for the comic to update, we’ve also been here long enough to have seen the occasional posts where you talk about your health. As some of the above comments said, your health comes first. If you’re unable to post the comic at the normal time because something happened, we understand and can wait for when you can post it.