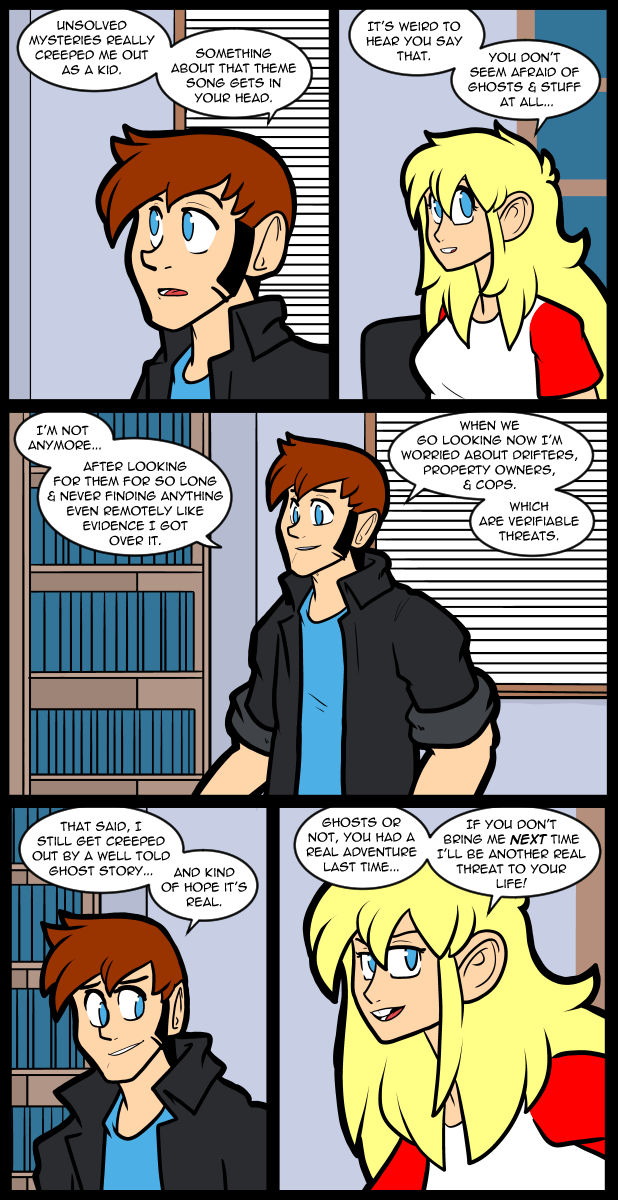 I’m gonna have all 2758 of my characters in a ghost hunting arc at some point and be totally overwhelmed by my ridiculous choice. We’ll cross that bridge when we come to it though. I’ve been doing this comic long enough now that the world has fallen back out of love with ghost hunting shows. There are some hanging on, but nothing like the boom caused by 911. Major tragedies in the US always get followed by a wave of spiritualism. It’s crazy to think about how long it held on after that. Makes me wonder what the next disaster will be that spurs it on again. I wonder if I’ll still be alive & making this comic, or any comic at all for that matter. If I am you’ll probably be able to support it on Patreon or subscribestar. assuming they survive that long too. I have my doubts…

I was so in to the Ghost Hunters when they first showed up on Sci Fi. They were all about evidence, which I was totally down for… Until I started to realize their evidence was shit. After that I enjoyed the show as a way to hone my critical thinking, even though I was so disappointed. Live & learn, I guess. I remember making comics while watching the overnight ghost hunts on Halloween years ago. I even went on the forums & stuff & told my personal experiences. Oh well… Life moves on.

Someone once told me-

when you read [a good ghost story], it shouldn’t make you feel that this story [couldn’t] happen.

A good ghost story is spooky, + effective, when…it makes you feel that this story SHOULDN’T happen!

DAMN! Nina is getting sassy!

Symptoms of a lingering attachment to Thomas, methinks…

Or just being her, and not having all her emotional development revolve around a male. Not saying you ARE wrong, just that there are OTHER interpretations. If my friends got up to mischief without me, I’d be pissed too.

When it comes to “Ghost Hunters” one episode that had evidence that is memorable was the Eastern State Penitentiary investigation. On one of their cameras they caught this strange, small figure on one of the catwalks. The figure was running towards the camera before immediately zipping away from the camera. The thing that made it strange though was they WAY it moved away from the camera, as it didn’t look like it turned around at all. It was as if it started running backwards, but if you’ve ever tried to walk or run backwards it’s VERY awkward. The figure’s movement was too smooth and quick for it to be someone running backwards.

Those creepy losers who sometimes come by the store to shoplift? I remember what they look like and I remember their personalities.

P.S. One of your 2758 characters has to be Thomas’s car, which honked its horn to help them out when they were ghost hunting that one time. Anyone who doesn’t remember that, a good place to start reading that storyline is comic 747, and the actual honk occurred in 774. Weird! Spooky! Those numbers are anagrams!!!

YouTube is lousy with scary ghost stories. Some with footage. I find BizarreBub’s compilations to be some of the scariest stuff around. Nuke’s Top 5 also does well on this front. Chills does a fine job of finding video but his voice is nigh-impossible to listen to. Something about his inflections and accents. I mean, come on. “Berger Keeeng fut leeh-tiiiis” is just unfathomable.

In the vein of Ghost Hunters and critical thinking my favorite show is The Curse of Oak Island. My wife and I joke about making a game where you have to take a drink every time they say “Templars”. I haven’t looked up the credentials of their archeologists and the producers seem to require that somebody expound at least one sketchy idea per episode but it looks like they have dug up enough stuff to support at least one legitimate journal article on colonial America.

I heard about Oak Island back in the 1960’s on a radio documentary. It described the origins of the mystery and how each attempt to solve it just messed up the evidence and made it harder to solve.

Well, one thing that can be said about TCOOA is that they certainly have found relics and construction that go against the *known* history of the place… evidence that the place was known and used (by Europeans) regularly by *someone* before the area was settled officially.

The Curse of Oak Island? Seriously? That is one of the most boring shows I’ve ever watched but my dad is completely into it and makes me watch it with him every time a new episode is on.

Speaking of the many characters in this amazing story, where is Wess in all this? as Reggie’s friend/minion I would of thought he’d pop up by now

Wess took up a new job, driving trains at a rail-yard.

Some time back, maybe 10 years, I heard a radio interview with a ghost hunter from the Gettysburg area (IIRC). One tool he mentioned was a model of personal tape recorder that they really liked, because it was so sensitive at picking up unheard sounds.

But he said they were getting hard to find, because the manufacturer had discontinued them.

Too many users had complained that the things were crap, because there was so much background noise on the recordings that you couldn’t understand your own voice notes.

So much for scientific rigor.