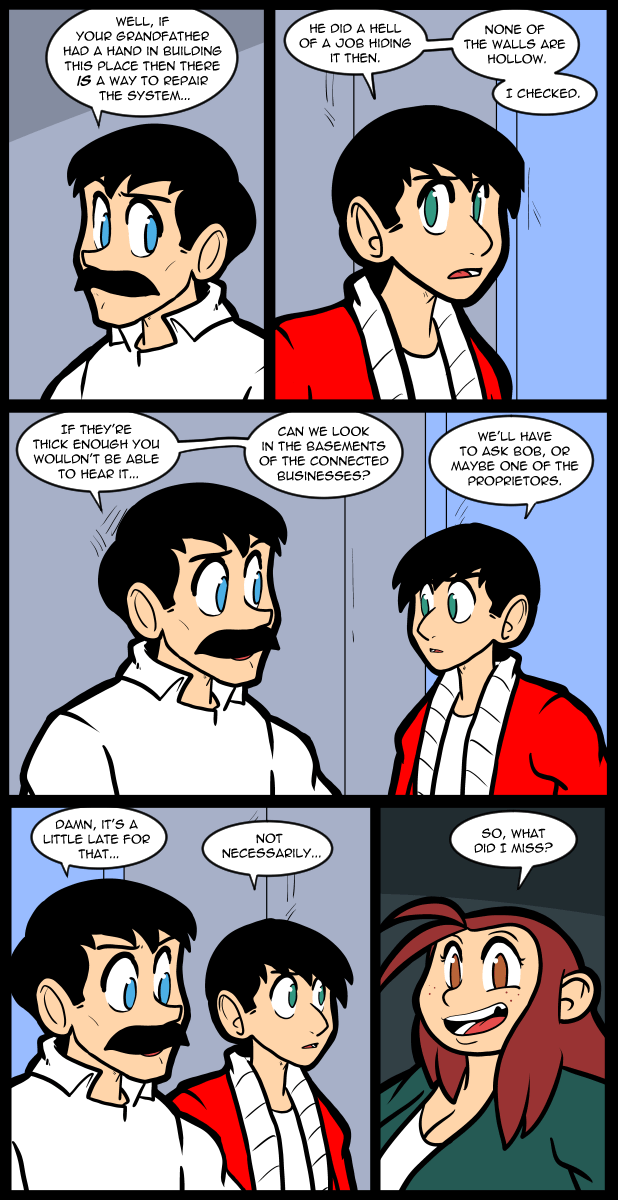 My internal clock is all fucked up again, so I’m out of sync with my comic making process. Usually I’d be mostly done the day prior to a post, but I’m kind of running right up to the hour of posting. I want to nap at weird times & I’m not falling all the way asleep, which gets me all out of sorts. Anyway I wasn’t 100% sure about getting Patty involved, but I need to keep these guys busy for another section so I can switch to Thomas & Nina for a bit. Plus I just like drawing her. She smiles in almost every panel like the world is wonderful & it makes me get, like, a contact smile.

I’ve noticed in the discord server, which you can get into by joining patreon, that everyone is really worn down & on edge. I was trying to figure out something to do to get people out of the misery after we spend hours at a time arguing about politics. The only thing I could come up with was a channel for happy things only. If you only ever look at problems you can get this tunnel vision where you forget about the good in the world. Plus it’s important to remember that the people you argue with are also humans just trying to get by. People who love their dogs, & children, & have more in common with you than not.

Come join us comrade (you don’t actually need to be a Patron, though it’s appreciated and we have cookies*, you could also ask Super Jackie Guru nicely for an invite), as we’ve had all of these channels and more! Some of them we’ve had for many yesteryears, some are only as recent as two days ago, you’ll have to find out for yourself which is which.

Sorry if this also counts as spam, (I am unaffiliated), but I stumbled across the good news network a while back (google’em if you like) and they only post real stories with positivity and an uplifting arc to them. I’ve got enough toxic sludge in my own noodle that I don’t need to go looking for it in the rest of the world anymore.

I like the concept of a rainbow channel, where we don’t discuss the rain, but do discuss the positive aspects like the sun coming out, cat videos, coyotes stealing watermelons, squirrels falling out of bird feeders, etc…
Politics may be found to have more to do with compromise than in changing someone else. It may become shown, by research, that liberal or conservative may actually be due to brain chemistry or brain organization, than opinion or parenting.

Except brain chemistry /can/ be altered by parenting, for good or ill. (I’m an annecdote/datapoint). I’ve heard that bit about politics before, I wonder if that study was global or american. An armchair hypothesis is that, in the same way studies sometimes create an arbitrarily false contrast, to try and see if data is more visible, perhaps the radical polarization of american politics created that contrast. Thus, it became visible in the study when it may be less of a factor in a less agitated sample.

Ironically, that analogy demonstrates how easily humans can come into conflict with each other. For you see, I love the rain. The rainy season is my favorite time of the year and like the only time I go outside just to be outside. Meanwhile I shirk away from the sun when it shows itself from behind the clouds.

Why does sharing that you love the rain have to generate conflict? The example was not likely intended to be an excuse to other and exclude people, but was intended to foster the spirit of sharing of joyful experiences, which you did.

It’s beautiful that you love the rain (I’m a canuck from the wonderful wet coast myself) and it’s beautiful that GSP loves rainbows. In fact this means that you have common ground because GSP could not enjoy rainbows if there weren’t rain (since it’s a necessary component to make a traditional rainbow.)

People being negative these days is a reasonable reaction. You can watch puppy videos and get a good laugh all you like, but it still doesn’t change the fact that everything’s falling apart.

Still, I recommend trying to get a good laugh before bed every night. Helps you sleep better. When you sleep better, the next day automatically improves. At least somewhat.

There have always been idiots pulling nails while the ship is at sea. As a scale thing, we now have the capacity to report on all the nail pullers, and it’s useful to do so, as a system. The problem is it is cognitively overwhelming for individuals (due to scale) and we don’t get sufficiently supported by hearing enough of the ever-larger repair crew working to keep the ship afloat.

Despair robs people of the will to try & repair things. While I may briefly despair I won’t stop trying to help others, or do good in the world.

I find that simply focusing on the smaller/more local things that you can do gives a much more positive outlook that focusing on larger/more distant things. The key, I feel, is to remember that we are limited in what we can do rather than try to fix everything we feel is wrong. We may be must motes of dust in the cosmic picture, but we are larger than life to our loved ones.

I first read your correction as a contradiction arguing that people /can/ do little things to help, but shouldn’t be /forced/ to do same. Then I twigged on it being a correction for “but motes of dust” and then I felt silly and smiled.

Off-topic:
There is also ‘raise the vibe’.
I have a theory that getting enough surprising positive input makes you more creative to come up with better fixes.

On-topic:
A few things to be weary about:
We all have a negativity bias, giving negative developments way more weight. That doesn’t make them more true or your current self more right. Rather we want to try to correct for it, e.g., with counter-intuitive questions.
What always works: Finding common ground and stressing the joint search for truths (protruthpledge) based on proven principles.

Then working your way forward to try and pintpoint the disagreement, while also stressing the agreement. The nonviolent communication gives some idea, if not put to the extreme. Basically, you only ‘know’ what the other means, if you hear them say or confirm it, not when you have voiced an opinion.

Much of political talks is just judgment and manipulation to an end. U.S. has been hit pretty hard, as Republicans seem to have abandoned fairness and reason for profits, while Democrats seem to have abandoned the courage to admit being wrong. How can you think in such an environment? Everyone is confused about names, and being hit by corporate media cocktail, which is not a good basis for clear thinking.
Politics should be rather about sharable insights and making joint decisions with most effectiveness and necessary compromise, uplifting each other’s capacity to reach a reasonable end.
People are scared shitless but most are not ready to admit, like patients in a padded room. The scares are sometimes imagined. Emotions are being confused with useful insights. Some groups are losing some relative power advantage while others are gaining recognition, which falls sour within an exploitative economic system.
Big picture is being confused with doing a lot of research in one direction of a topic.
Facts are being confused with policies, although both have very different ways of deciding what’s best. As problems are complex, that info needs to be managed sometimes with tools to even keep track of all issues, not just the most important ones to oneself. Most policies are not communicated with ethical principles, which is the logical basis for good decision-making in line with values. Opinions are the commonly voiced and least transferable piece of information. There is never a guarantee the opinion leader did not make a mistake in their reasoning if not shared. Ideology is often not very deep, and was acquired through mere repetition.
So, yeah, taking people with a grain of salt and humor as the idiots that we all are on a regular basis is sometimes well deserved and fair play.
Holding them accountable to fair argumentation practice might seem tough but raises the group’s decision level after all. Acknowledging truths and emotions while keeping the focus is key.
Some people are violating basic conversational norms and maxims, i.e., actively trying to not be understood, gather more attention than needed, etc. and should be discouraged from participating. That’s the point of free speech, not to just express yourself, but to further the group throught. Free as long as you actually making an effort to support the purpose of free speech. Demagogs and chief bullshitters are damaging.
Some people lack the perspective for scale or the knowledge from outside or the view of the limits of their pond that changes how you perceive systems work at a higher level. Some overlook that contradictory policies can make sense in contradictory contexts, if not all participants use reason. On the other hand, some wanna-be scientists or politicians overstate the limits of their methods and what they don’t know as they think their job reputation depends on making a show of knowing.
Some people just like to mope, and crave sympathy more than honesty and rather need a supportive shoulder. Which is fine, just don’t get confused.

Some popular science books give a much more positive overall outlook with tons of messages, e.g., peaceful past civilizations, Steven Pinker’s positive developments come to mind.
Jonathan Haidt stresses just two differences in psychological traits between conservatives and liberals, which is propensity to take risk and to trust in authority. (Neither of these is inherently more correct in either direction, but may be right for the respective person, but not for a collective policy for different people.)
Being optimist is not more right, it’s just more prudent. So you learn to pay attention to the small successes and plants that grow into a big tree.

These could be just some quills for your quiver.

Being an optimist is prudent to maintain the volition of effort and the faith that one can succeed.

Being a pessimist is prudent to prepare for disaster so one can mitigate the negative effects of failure and chaos. Pessimism also allows one to make much better estimates when it’s necessary to make financial, chronological, or probabalistic estimates of projects, (time and money needs) or risk analysis.

After all that is done, optimism is needed to get the ball of ‘it might work so let’s try’ rolling again.