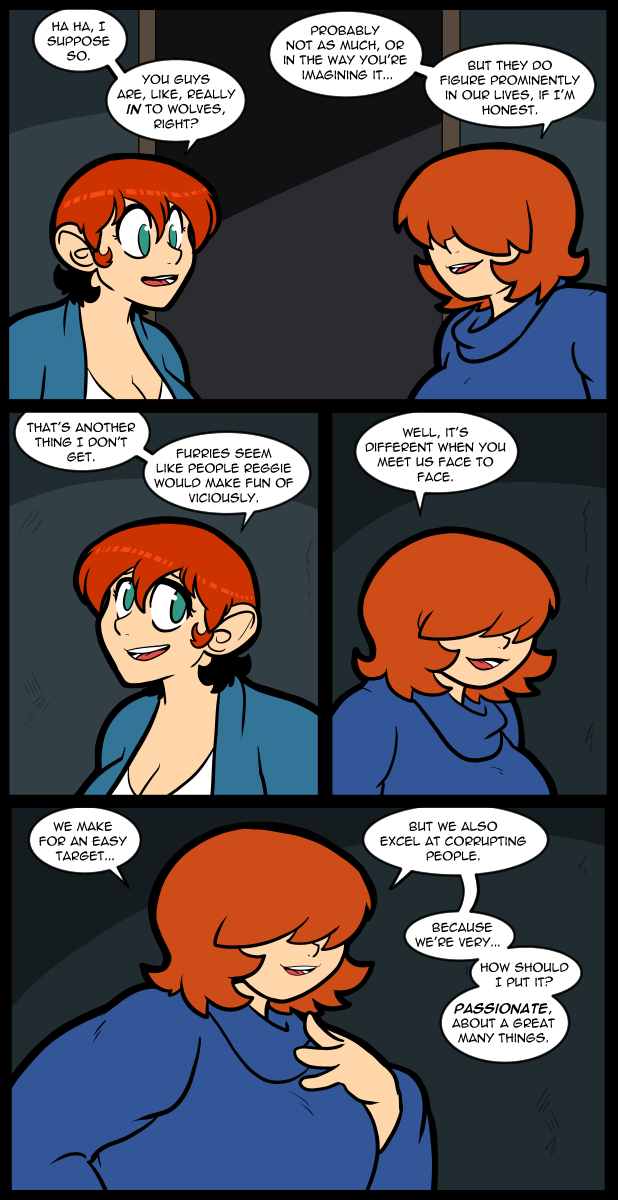 I’ve had a lot of dealings with furries in my many years on the internet. One who called himself Farx was my “suspiciously wealthy furry” patron for a very long time when I was struggling to make any money doing art on the internet. I wasn’t his best friend in the world, but we chatted at length many times & I trusted him, which is more important than people realize sometimes, I think. I would call him a friend, & I hope he would do me the same honor, but I can’t ask him now, because he passed away a few years ago. I still remember the day I was like “Where has Farx been for so long? I should see what he’s up to” Which is kind of odd for me really. When I went to his page on Furaffinity the shouts were filled with remembrances & grief. He actually died shortly after the last time I spoke with him. I remember him talking about making an effort to check in more often because he hadn’t been feeling well… He was extremely supportive of my work, expressed a love for my art style effusively, & was generally the kind of person you hope to work with regularly as an artist. I sincerely wish I could go back and tell him how much that meant to me, or show him how successful I am now with my Patreon, which you can sign up for & become my probably not very wealthy patron. In fact, I know he would be pledging waaaaay more than I ask for, because that’s how he was with everything. He constantly told me I was lowballing my art (which I still don’t believe really) & basically forcing tips on me. He was a fun guy, a funny guy… Someone who I didn’t appreciate properly because I wasn’t confident enough in myself to be able to. I wish I had gotten to this point in my life while he was still here to enjoy it. Alex came about because of him pulling me to the edge of the furry community & she’s one of my favorite creations & really as close to a fursona as I’ve ever had. Maybe it’s odd that she’s a girl, but then again maybe it isn’t anymore. Either way he contributed to my life in a positive way that I will always appreciate. If there’s a life after this one I hope he’s well & look forward to maybe getting to meet him “in person” so to speak, someday.

As a side note, if you’re wondering why the page didn’t go up at midnight, I went to the dentist today & the trip went a lot longer than I expected.

Passionate and corrupting? I knew there was something I liked about her.

The older you get, the more teeth become an IMPORTANT health factor/vector. Keep up the good work!

Yeah, if I could talk to my teenage self, “Floss, you ass!” would be high on the list of things to say.

If you unexpectedly find yourself in a thong, then you’ll know the text of your message got through ;-)

I assure you that is significantly less em-bare-assing than me in a speedo.

And I don’t even want to think about a thong — plumbing the depths of the worst asspects of the “crack of doom” is discouraged.

Also, I hope our friend in the thong doesn’t mind us butting in …

Heh, heh!
I agree that some asspects aren’t worth thinking about. :D

I once woke up on the beach, with a severe headache!
I felt very dizzy.
I asked my friends if I was decently dressed, + they said:
“You’ve been briefed!”

Oh dear, but then what happened — after all you’d just debriefed your friends!

Oh yeah!…Try to sneak from the beach, to your car…naked!

The accidental-nudist knows how to use the night’s darkness, + shadows, when needed!

There’s nothing more startling than the [naked truth!!!] ;D

An artist is inevitably his own worst critic.

He likely DID believe you were lowballing your art, especially compared to others in the field.

I’m sorry about your friend.

Furries are the kindest people ever. They just want people to love what they love, and I respect that. And the sewing skill and dedication required to make a fursuit is phenomenal.

I’ve floated around the outskirts of the furry community for years; I’m in a number of discords and even a couple patreons that feature furry art. While I don’t particularly consider myself one (and the more ‘hardcore’ aspects of the community are definitely not for me), I do enjoy the art styles of various artists in that community.

It is interesting though, as I’ve heard from a number of my artist friends that furry commissioners tend to tip way more/pay more than most of their other clients. I’ve no real data to back that up, but I’ve always kind of wondered what causes that.

I am edging towards “I’m not a furry…buuuut” territory.

When I showed my wife Alex and her cat ear headset, Spousal Valdvin asked for one for her birthday. I giddily granted that wish.

Interesting that Alex’s group says that they like to “corrupt” people.

When my friends took me to a live show of, The Rocky Horror Picture Show”,…their term for taking someone to the show, for the 1st time, was to say that they had “corrupted”- him, her, or them.

[The Rocky H. P. Show is an R-rated type of a play, + it is downright silly, if you worry about things like that.]

I thought the accepted term was “virgin”, but them I’m also surprised you didn’t say you got dragged to the show ;-)