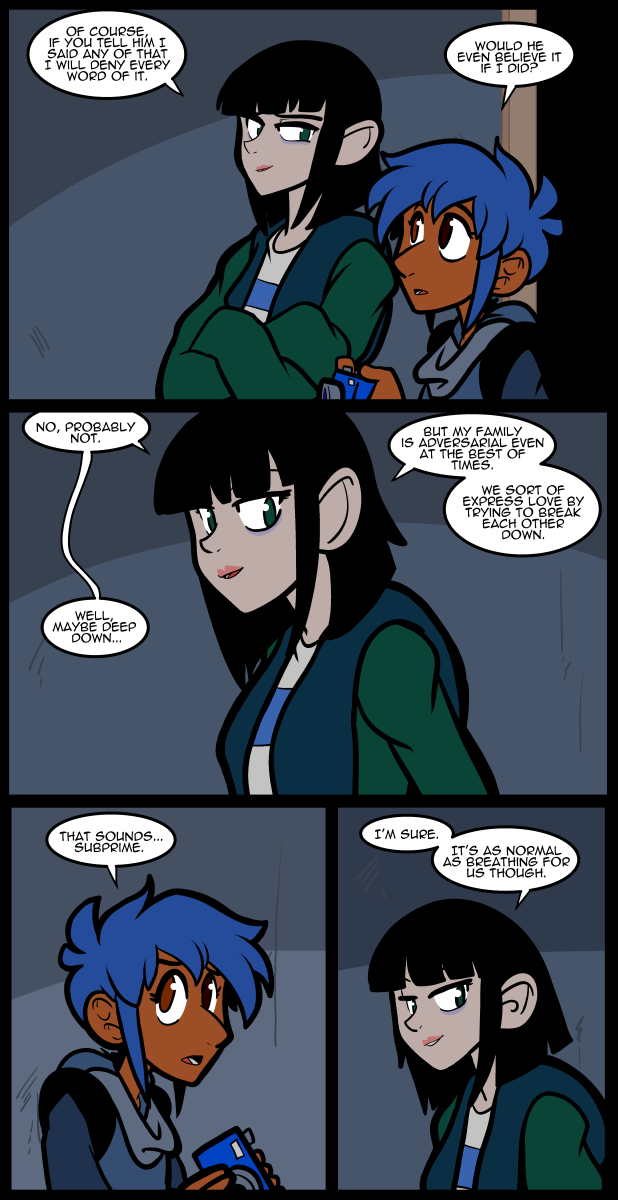 First of all, thank you to those of you who have been sending me early Xmas gifts. I feel like you guys treat me very well without sending me gifts, but I certainly appreciate it when someone thinks so much of my work to send me a gift on top of whatever else. I’ve been very blessed to have such a loyal audience when my skills are so mid tier. Even though I haven’t had time to work on anything extra I am still working on my Lego submission for the fan built thingy & the extra parts help me along. Of course the sets for this season haven’t been super architecture friendly, but a little imagination can make up for that. Anyway, just wanted to say a blanket thanks for that. Also, even if you say you don’t want a sketch in return, just remind me if you ever change your mind & I’ll get to it as soon as I can. I don’t put a time limit on that. It’s like in the godfather “someday, and that day may never come, you will come to me with a request…”

As far as the comic goes, family dynamics can vary wildly from group to group. When I was little I was struck by how out of place the women my uncles dated seemed around my family. The slow, timid, ones never lasted. My family is unintentionally brutal when it comes to teasing & outsiders get their feelings hurt very fast. The ones who ended up staying were the ones who were able to hack it. When you join a family from the outside your ability to adapt to the new group is key. My dad is an odd case though. He’s part of the family, but also sort of apart from them. Stern & quiet, he doesn’t join in in quite the same way & never has. Yet the rest of the family accepts and loves him for who he is even if they don’t really “get” him. Everyone else is sort of equals whereas my dad actually gets respect. My sister is very much like my dad in that respect, not usually part of things actively, but sort of commanding respect via sheer force of will. I dunno, I’m sure everyone has things they can’t easily explain about their families. There’s so much backstory it’s very hard to spell out in a way that can convey all the subtle layers of subtext & meaning.

In sadder news, my sister’s dog had to be put down because of cancer. They all took it pretty hard, including my mom, but my nephew is only 3 & the concept of death is a bit much for him. Mortality is such a brutal aspect of life, but no one can escape it. Frank was a wonderful dog & his fate was cruel. He lived a good life with a family who loved him more than most dogs can claim though. If there is a place where we go on I hope he goes on in joy. I hope my nephew will remember him in some way other than being the first pet he lost.

Apparently when I was very young my family had a dog, but I have no memory of it. I think there might even be a picture of me with it somewhere. My memory of the story is even vague now, but I think it was given away because it was too rough with me. I do know that I was terrified of dogs until I was… oh, well into my teens at least. I actually liked puppies, but even smaller dogs made me uneasy, especially if they barked at me. I didn’t get over not really liking dogs until we owned some. Now, of course, our house is awash in dogs. Strange, loveable, creatures…

I look at my family and say it is a bit dysfunctional.

I look at others and after getting to know a bit about them that most are just a bit dysfunctional as well. Then I see one or two others that bring out the squick and my definition of dysfunctional is tossed on its head and I realize we actually have it pretty good considering everyone still talks to each other and nobody has offed a family member as far as I know.

As for dogs, I also have pictures of a golden lab with me as a toddler, though I also have almost zero memories from that stage of my life. According to mum a [censored] neighbour shot it and then it turned out it was someones bulldog doing all the damage.
So there is that.

It’s an old fandom term that was used for anything that disgusts you/grosses you out, but kind of in a less judgmental way than saying “ew, that’s gross/disgusting.” Like, you personally want nothing to do with something, but understand that other people won’t necessarily feel the same level of disgust with it, if that makes sense?

Like, for me, one of my squicks is incest pairings. Those are oddly popular in a lot of fandoms, and they’re just a complete nope for me, heh. Others can do whatever they want with the pairings they like, but I’ll avoid anything to do with that type of pairing because I don’t like being squicked out. :)

And now we know!

My wife could never understand the good-natured jibes and insults that are a part of male bonding. Especially when it was me bonding with our sons. She tried to make us stop, so I simply asked them what they wanted. They said they’d feel less loved if I did so.

But she still hated having to listen to it.

I actually don’t blame your wife for that. Even I don’t understand why men have to disrespect each other for the sake of respecting each other.

It’s like the Minbari meeting Earth ships with their gun ports open as a sign of respect.

If you value your lives, be somewhere else.

I really didn’t blame her, either. It came down to a choice between showing love to my sons and obeying her wishes. I obeyed her wishes before (that’s why we had them in the first place ;-), and I’d obey them again after the children were gone. I felt it more important to raise emotionally fulfilled children.

Just as long as it doesn’t escalate when one of them is in an understandably bad mood.

One of the other servicemen once said,”If a dog bit (me), he’d probably give it another doggy biscuit.” Shows how much he knows. When one got ahold of me here a while back, I didn’t give it ANY doggy biscuits. (Doesn’t help the meter reader much when the dog is chained up on a chain that reaches past the meter. Works great for the dog to trip you with though.)

“We only exploit your inadequacies because we love you!” (Animaniacs)

Probably not a good thing to say to people who suffer with autism spectrum disorder.

Is the strange choice of words a Brooksie thing? I haven’t ever heard people using the word subprime outside the financial industry meaning, and even so, “not of the first order” is a little strange in this context. Engineers would probably say suboptimal.

Brooksie often uses words in new ways. She probably heard the word in conversation & adapted it for use in her language in a way that makes sense based on how it sounds rather than it’s intended use. Even if it isn’t common, it isn’t wrong. She has accurately expressed her opinion of the situation.

Calling what you provide to us free-of-charge mid-tier is self deprecation that is relatively unwarranted. You have a set style, a talent for framing neat shots even if your ability isn’t Marvel-Level your writing and ability to make us love and care for these people you have created for us to root for is a thrice-weekly joy for me even IF they have been in this building for too damn long lol. Please keep up the great work and have a happy Christmas!