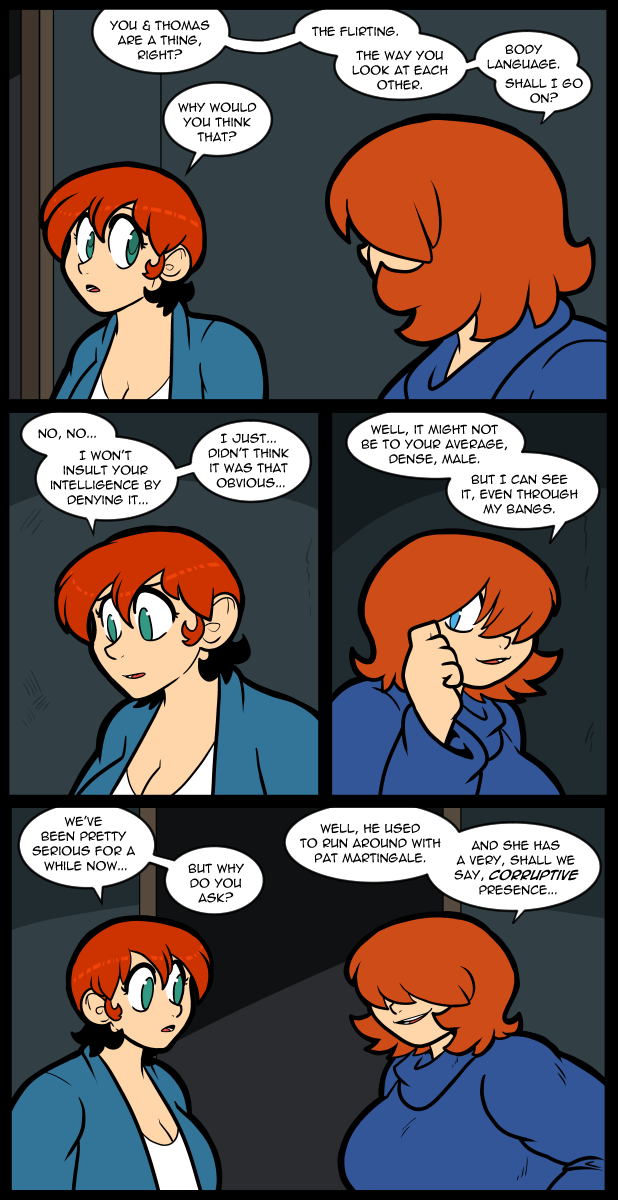 I suspect that most people don’t remember that Pat Martingale is Patricia “Rulette” Martingale, who ran the D&D game, owns the comic shop called Rulette’s, & went along on the mission that found the hidden basement in the hotel. Then again, I may be wrong & everyone knows, but I decided to make a note of it here, just in case.

Alex is about the same age as Carol, so she probably is exaggerating the idea that Rulette & Thomas “ran around” together unintentionally. She would have been young enough that she probably was only sort of aware of the particulars of their relationship & has just filled in the gaps in her mind. She is not, however, incorrect in describing Rulette as a corrupting influence. Although not malicious, she certainly enjoys exposing people to the wilder side of nerd culture, if that’s even the proper way to describe it.

If you would like to be corrupted by me please consider joining my Patreon for occasional racy images of various cast members & additional swears from time to time.

I can’t recall either, because his sister has only been mentioned one time, & I can’t remember if it was even by name.

How do you keep track of these things? So you can just casually say “has only been mentioned once” over a whole decade?

Oh then I totally misread what their relationship to each other was in the earlier pages.

Whatever Rulette did with Thomas still couldn’t possibly be as bad as what that “writer” woman (his ex, if I recall right) did to him.

I believe the inference here has something to do with embarrassing bones tucked deep into Toms Closet. These bones may or may not be snug inside a fursona.

The overarching point though, is that those bones shouldn’t be embarrasing, nor me-thinks, would Thomas be the sort to let it embarras him.

And from one who has lost the capacity to recall little details like Thomas’ background relations, your little reminder blog prompts are appreciated Jackie.

This entry is full of great stuff.

“The flirting. The way you look at each other. Body language.” As an average, dense, male, I am drawn to women with high EQ. (Maybe that’s why I married an MSW.)

And Carol’s switchback from “Whatever makes you say that?” to “I won’t insult your intelligence…”.