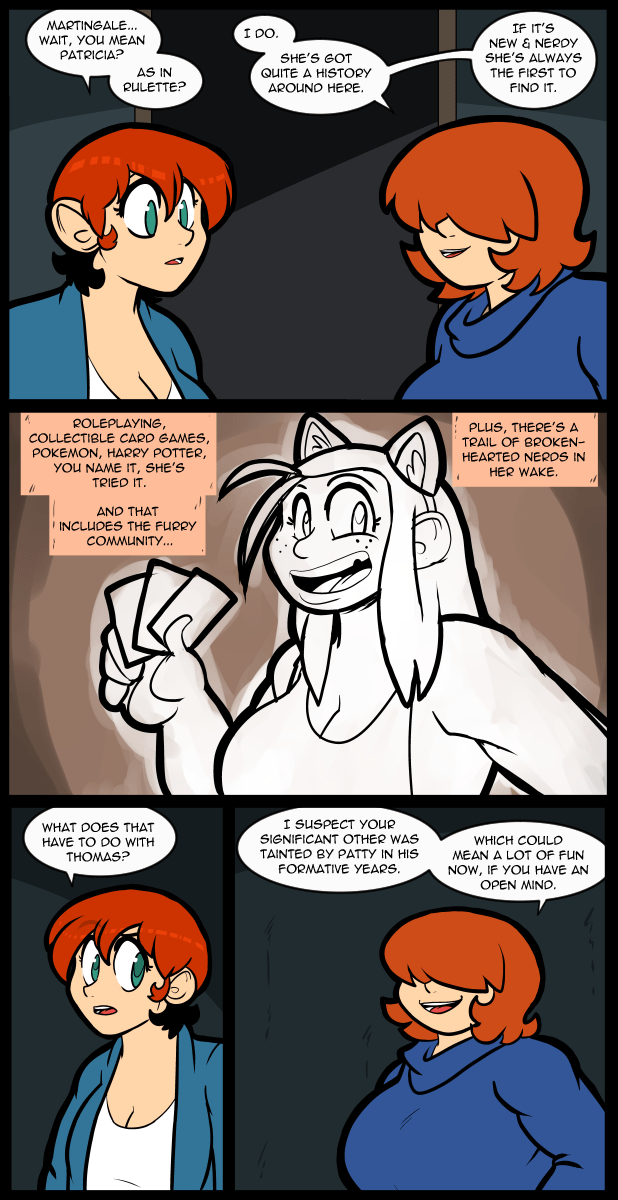 I decided to get fancy for this one & try something artsy for the look into the past panel. I don’t think this has ever come up in the comic but Patricia is about 3 years older than Thomas, so 29 or so. Making her the oldest of the twenty something part of the cast. She’s getting to the point where she needs to decide if she wants to have kids or not. Even though her age, and that aspect of her life hasn’t come up in the comic, I’ve still kept it in mind for writing her. As much as humans like to think they’ve defeated the biological clock we haven’t, & this is still a worry for some women. Although my perception of this is badly skewed from years of only seeing the women on social media who don’t give a shit about having families. Generally speaking every part of my worldview has been tainted from being online WAY more than most people as an aspect of my profession. Speaking of my profession, did you know that you can support my work via Patreon & other services? (links up there a bit, & maybe on the side area depending on your viewing choices) I expect you do, unless this is your first time reading the blog since I started doing this weird reminder thing in the blogs.

I’m not 100% sure if Alex is messing with Carol as a passive aggressive way to give her trouble for criticizing Reggie, or if she genuinely wants to see if Thomas has weird kinks that Carol could be taking advantage of. It might be a combination of both. Alex is good hearted so I doubt she wants anything bad to happen in any real way though. Still, she does have a bit of chaotic energy to her character…

Rulette is a powerful woman.

I like the style you chose for the 2nd panel. Makes perfect sense. Not sure about Rulette’s fashion there though. If I figure correctly that she is wearing a super cropped tank top, then we should be seeing ALL of the sideboob (:

She’s wearing an overshirt, but the lack of color makes it harder to parse.

It took me a sec but I got it. Maybe next time just a faded seam for the sleeve, or make the overcoat a slightly darker grey.

Or better yet, show us that sideboob :D

From my impression, it looks like Alex is stirring s*** up by bringing up ex girlfriends. I’d anticipate Carol getting defensive and insecure, and maybe forsee her confronting Thomas about it.

You have mentioned that Rulette is a bit older than the rest of the main cast; I think it was when she was introduced, she played GM for them, or the Great Ghost/Body Hunt. And her interactions with others about her father suggests a kind of wisdom.

Also a pic of Rulette in cat ears? Wowie. In the real world I’d likely be one of those broken-hearted guys. (I’m not sure if I qualify for nerd status because I don’t have expertise in the card games, video games, etc.)

Rulette’s age was referred to here

although it’s just implied that she’s older than 25, but not by how much.

I go by the idea that one can have geek-level expertise on alomst any subject. My wife geeks out about everything L. Frank Baum, for example.

What is the other comparison, besides certain not-standard interaction manners (like me, an introvert) which I don’t recognize yet?

In modern parlance nerd & geek are functionally interchangeable. Time has robbed them of most of their distinctive traits.

I’ve always felt that a geek is an aficionado of something, a nerd is an authority. A geek likes Star Trek, a nerd knows the actual names of all the red shirts, and what episode they died in.

All the answers are welcome, but now I’m more confused than ever. I can accept that.

I have by that measure possibly qualified as a comedy nerd since before the millennium.

Well, you could always have Rulette have a similar outlook that I had. If a kid came along, great, I’d do my best to be a great mom. But if it just didn’t happen for whatever reason, I’d accept that too. I never wanted to go through all the stress and hassle of fertility treatments, especially since I knew a couple who did that, and it nearly ended their marriage.

If you were to give Rulette a similar attitude, then she’d basically roll with the punches (and by extension give you some wiggle room in writing about her). Although, given that she’s a businesswoman, you might want to find her a mate who wouldn’t mind taking care of the kids while she’s working, in the event that kids come along. I don’t think Rulette could comfortably afford daycare.

And in case you’re wondering, no, I never did have children. I had to go on birth control for a long time to keep my period pain down to a level where I could function, and when I was finally able to come off of that in my late 30s, I had miscarriages. So it just wasn’t meant to be. I’ve decided it’s probably for the best, given that I developed bad migraines later in life, and my brother-in-law also gets bad migraines (as does my husband, although rarely). So the genetic disposition is there, and I wouldn’t want to risk putting my kid through that. (Not to mention other unfortunate realities like global overpopulation, pandemics, and climate change.)

We wanted children. And we got some, but it wasn’t easy. Various unpleasant investigations. Gwen noticed her vaginal mucosa lacked spinbarkeit (the ability to stretch into long strings, apparently normal around fertility). She took ventolin at the right moment in her cycle, the mucous became very stretchable, and we achieved pregnancy.
In due time, went for amniocentesis to check for genetic defects. Close to the time we were to get the results, we were told that someone (identity unknown) had sabotaged the process and we’d have to do it again. Gwen refused. She considered it too late in the pregnancy to abort safely if that were indicated. The people at the hospital were surprised.
A few months late, she gave birth to a normal child.

I like the artsy stuff, but I do beg to differ on the biological clock. Not so much that there isn’t an age where having kids becomes more difficult, more so that it’s not near your early 30s.

I wonder if Alex has to overcorrect to stop herself from saying ‘significant otter’…?

Carol looks downright svelte next to Alex. Appreciating all your generously proportioned gals, though.