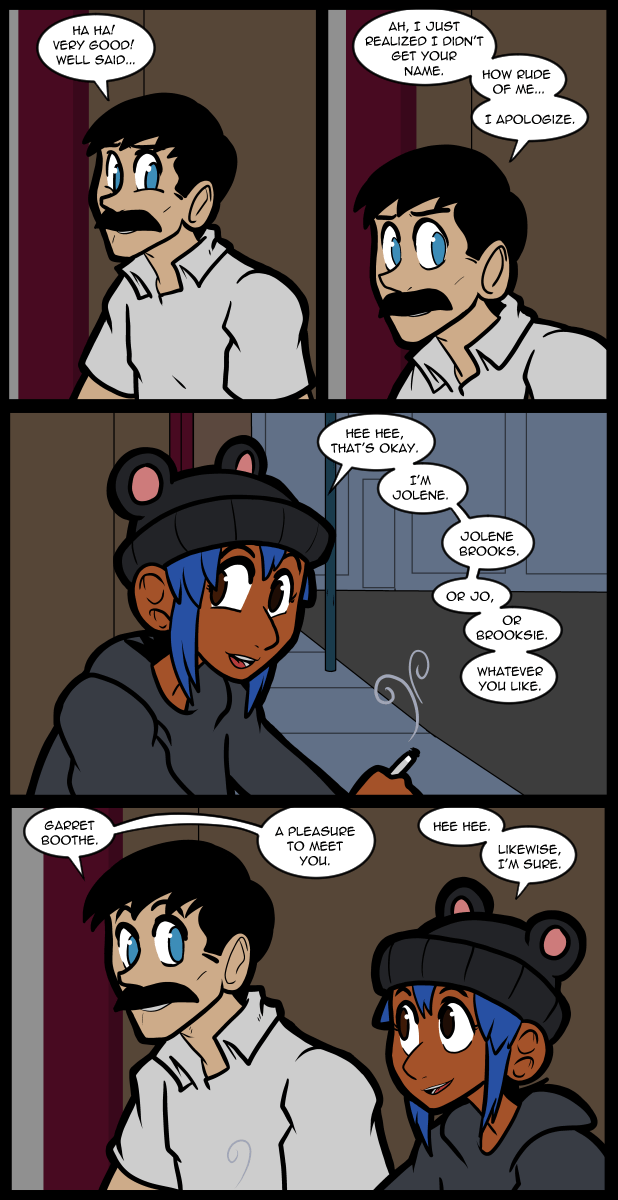 I can’t begin to tell you the events of he last couple of days. Well, I could begin, but it would take a long time to get through & I’m putting out some fires at the moment. What I do have time for is reminding you that my Patreon is a thing & if you enjoy my content you might consider supporting it. With money. Other than that I’ll have to get back to you. I gotta look in to more stuff… See you sexy bitches later.

(Singing to the tune of- “Ride Captain Ride” by Blues Image):

…We can laugh our lives away and be free once more.

RIDE, Jolene, RIDE, upon your mystery ship!
Be amazed at the friends you have here on your trip.

Ride JOlENE ride, upon your mystery ship!
On your way to a world, that others might have missed!

In my mind she is *saying* “hee hee” and I don’t think anyone can tell me different.

Laughing always looks weird as text so I just tried to match what her laugh would sound like.

An interesting name, considering the nature of his employment. A garret is an attic room, usually not a pleasant one, and invariably cheap. And a booth is a very small shed.

And both tend to be narrow spaces. Perhaps that’s indicative of his thinking.

If so, I think a friendship with Jo will be great for him, should he choose to accept it.

And then they FUCKED

For some reason, Patreon isn’t letting me sign up with you, not sure why :(

It can be a number of issues. If you’ve ever been a patron before I can probably sort it out. If not you’ll have to contact their support, or try subscibestar to get access to the same content on a different service.

First, Jo was sad. Now, the scene has taken a delightful turn. She’s not sad and I’m happy about it!

It seems likely that at some points in her past she would have frozen up and not been able to relax and enjoy the moment like she is doing. Great job, Jo!

By the way, one of my favorite science fiction authors is Randall Garrett.

Some of his work from the 60’s has fallen into the public domain, and you can download it for free from Project Gutenberg:

He is best known for his “Lord Darcy” stories, which are murder mysteries set in an alternate history. In the world of Lord Darcy, magic was discovered and as a result technology has not developed as quickly. Lord Darcy is an investigator working for the Anglo-French Empire, one of the world’s two superpowers; the other is the Polish Empire. With the help of his forensic sorcerer, Master Sean O’Lochlainn, Lord Darcy solves murders. Sometimes he foils sinister Polish plots as well. (That world had a war something like one of our World Wars, and the Polish Empire was soundly defeated, so now they are trying to do sneaky things to undermine the Anglo-French Empire instead of openly attacking.)

Gutenberg has the short story “The Eyes Have It”, which was the first Lord Darcy story, and I highly recommend it.

I also really loved the novel _Unwise Child_ which Gutenberg also has. The protagonist is named Mike “the Angel” Gabriel. Strange things start happening around him, then dangerous things start happening… what’s going on? And does it have anything to do with the first true Artificial Intelligence ever created?

Another alternate history +/or horror item that you might like is the 1991, HBO film- Cast a Deadly Spell.
CAD Spell is a combo of the genres of- 1940s…Humphrey Bogart…tough, detective films and ghost stories.
In the film- it’s 1948 in L.A.. Everyone knows + uses magic, except our hero. Monsters, dragons, zombies, + wizards, all exist with the usual, 1940s tech. People light up cigars with small spells.

Here’s an article on the film-

When I first read the Lord Darcy stories, as a teen, I was really interested in the mystery and the magic. But now, as an adult, I also really enjoy the “alternate history” stuff.

In the world of Lord Darcy, the “reconquest” of Spain never happened, so Spain is an Islamic state where they speak Arabic. The Protestant Reformation never happened, so there is only one church, “the Church”. The little kingdoms in Germany and Italy never coalesced into unified countries. The Anglo-French Empire uses an evolved form of the “feudal system”. And, of course, technology hasn’t advanced past steam, so they have trains but still use horse-drawn carriages in town.

I’ll check out _Cast a Deadly Spell_ for sure. I love David Warner… let me guess, he’s playing a villain? ;-)

For some reason I can see both her and Nina getting along very well with Mr Boothe here, Nina could quite possibly be very (platonically) charmed by him and him becoming more of a recurring character.. much to Reggie’s displeasure. It could also lead to more reggie growth and possibly a bit of reconciliation between the father and son. Or so I could hope. I like his character and I like where this story has been going lately

Turns to his dad,” Who are you, and what have you done with my father?”

The comic is making me smile in so many ways

You’ll have to ask for a link by email, or something. Twitter DM if you’re in a hurry.

I’m trying to figure if Brooksie will call him Garret or Mr. Boothe, and if he insists on the former, if that will take some convincing for her shyness.